Forum List What's new Dark Style Change width
Log in Register
What's new Search
Menu
Log in
Register
Navigation
Install the app
More options
Dark Style
Close Menu
Posted on November 12, 2018 by Todd Erwin
You are using an out of date browser. It may not display this or other websites correctly.
You should upgrade or use an alternative browser.
Incredibly good sequel 4.5 Stars

Role reversal is the driving force behind Disney/Pixar’s Incredibles 2, picking up exactly where its predecessor left off.

When we last saw the Parr Family, aka The Incredibles, superheroes were still illegal yet the crime fighting family was about to do battle with Underminer (voiced by Pixar favorite John Ratzenberer), who was laying siege to the city. The family manages to stop the destruction with some help from Frozone (Samuel L. Jackson), eventually, with Underminer getting away and the Parr’s under arrest for acting in a superhero capacity and much of the city in ruins. Homeless, the family is given shelter at a nearby motel, that is, until the Super Relocation Program is shut down. Bob Parr, aka Mr. Incredible (voiced by Craig T. Nelson), grudgingly decides to go back to work in the private sector, that is, until Winston Deavor (voiced by Bob Odenkirk) and his sister Evelyn (voiced by Catherine Keener), the owners of DevTech, invite Mr. Incredible, Elastigirl/Helen Parr (voiced by Holly Hunter), and Frozone to a meeting at company headquarters. The Deavors want to sponsor the return of superheroes by installing cameras in their suits for the public to see the good that they do rather than just the destructive aftermath, and enlist Elastigirl as their test subject. Winston provides the Parrs with one of his mansions to live in, leaving Bob to deal with daughter Violet (voiced by Sarah Vowell) and her teenage angst, helping son Dash (voiced by Huck Milner) learn “new math,” and trying to keep infant Jack-Jack under control as his multiple powers continue to manifest, while Helen uses her powers to try and take down the mysterious Screenslaver, who is wreaking havoc on the city.

What drives Brad Bird’s return to animation, Incredibles 2, is the characters, particularly the role-reversal of Bob as stay at home Dad, which is where the film truly finds its heart. We kind of feel sorry for the big lug as Violet goes into outbursts when the boy she has a crush on, Tony, gives her the cold shoulder after having his memory of her erased, and even more so as he goes many a sleepless night trying to keep up with Jack-Jack. I have only two very minor complaints, and those are the weak development (and reveal) of the villain and that, at times, the film feels like a retread of the first film (but when a formula works this well, why deviate?). As one expects from a Pixar film, the animation is excellent along with the voice acting. This is yet another home run for both Pixar and Brad Bird. Oh, and be sure to sit through the end credits to hear the theme songs for Mr. Incredible, Frozone, and Elastigirl – they are a hoot!

Although Incredibles 2 was rendered as a 2K digital intermediate with Dolby Vision high dynamic range in premium theatrical venues, Disney’s 2160p HEVC-encoded transfer with HDR-10 on the 4K UHD Blu-ray is an excellent upconversion. Colors pop, especially the reds and oranges. Fine detail is excellent, revealing more defined textures in the costumes than what is evident on the included 1080p Blu-ray. Contrast is greatly improved, although some may find the image a tad darker than its 1080p Blu-ray counterpart. I actually found the Blu-ray to be a bit blown out and overly bright in some scenes. Blacks are deep and inky, and there is a great deal of shadow detail shining through.

As with previous Disney/Pixar UHD Blu-ray releases, there are a multitude of English audio choices to choose from: the default Dolby Atmos (compatible with Dolby TrueHD 7.1), Dolby Digital Plus 7.1 (at 1.0 Mbps), Dolby Digital 5.1 (at 640 kbps), and Dolby Digital 2.0 (at 320 kbps). I have always felt this was too redundant, but even going back to DVD, Pixar has almost always included both 5.1 and 2.0 tracks. Even for those without an Atmos setup, I would recommend the Atmos track. I listened to the film in both a 7.1 and 5.1.2 configuration, switching between Atmos (defaulting to TrueHD 7.1 in my 7.1 room), DD+ 7.1, and DD 5.1, and the Atmos track won out every time. Volume did need to be kicked up a few notches regardless of which track was chosen, but the Atmos had stronger dialogue, a more immersive surround track, and deeper bass (I could actually feel the floorboards vibrate in a few sequences that also alarmed my cats). Of the three, I found the DD+ 7.1 track to be the weakest, with thinner dialogue and weaker bass.

Auntie Edna (1080p; 5:08): Edna Mode (voiced by Brad Bird) agrees to babysit Jack-Jack, only to discover his multitude of powers in this new short directed by Ted Mathot.

Strong Coffee: A Lesson in Animation with Brad Bird (1080p; 18:50): A look at Brad Bird’s directing technique as well as the many inspirations from his childhood up to becoming an animator as an adult. Very fascinating.

Incredibles 2 Special Features Blu-ray
Super Stuff (1080p; 6:36): A look at the Retro-Futurism of the film.

Digital Copy: An insert contains a code to redeem a digital copy on Movies Anywhere, which gave me access to UHD digital copies on Vudu, Google Play Movies, and FandangoNow, and HD on Amazon Prime Video. I do not own an Apple TV or an XBOX One so cannot confirm the resolutions on iTunes and Microsoft Movies, respectively.

Digital Extras – Many of the above special features are also available with the digital copy on various platforms. Some have been combined and renamed. There are also quite a few additional extras that are exclusive to digital, some exclusive to particular retailers. There are so many discrepancies that it would just be too exhaustive to hunt them all down.

It was well-worth the wait for the sequel Incredibles 2, and the 4K UHD Blu-ray does not disappoint with excellent video and audio and a nice set of extras.

Waiting for my next trip through DE to snag. Thanks Todd!
A

That makes me want to watch it now

Great review. Thanks. One of my top five movies for 2018 so far.

Thanks for the review, Todd. We watched the film for the first time last evening, renting it for free via Amazon (used some digital credits, but it's only $2.99 to rent). My wife and I both enjoyed the film. I thought it was inferior to the first Incredibles, but still a very good movie. It will probably be awhile before I pick this up on UHD, though, as Di$ney's pricing on their titles is higher than I'm willing to pay, and they are very slow in reducing their prices. I hope to pick up a two-pack of both films in UHD sometime down the road.
You must log in or register to reply here. 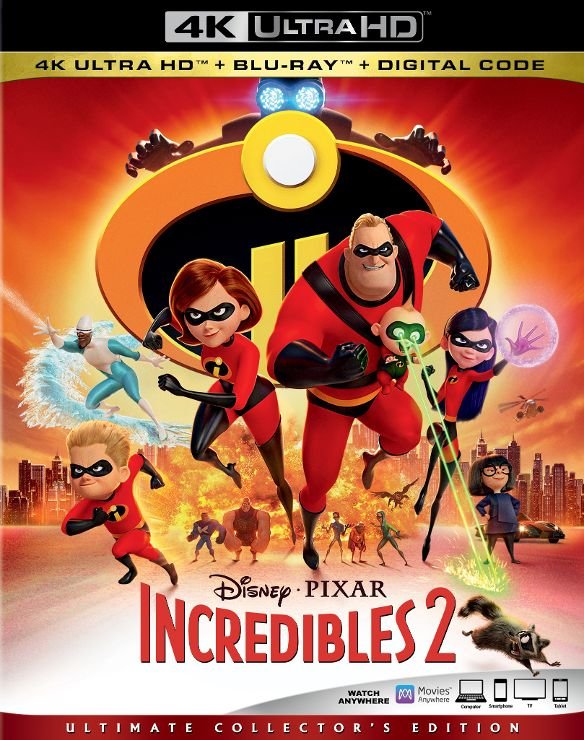