Forum List What's new Dark Style Change width
Log in Register
What's new Search
Menu
Log in
Register
Navigation
Install the app
More options
Dark Style
Close Menu
Posted on November 11, 2018 by Sam Posten
You are using an out of date browser. It may not display this or other websites correctly.
You should upgrade or use an alternative browser.
Jesus is coming and he is pissed! (Recommended) 4.5 Stars

After Earth passes through the tail of a comet, all of our machines begin turning against us. At a lonesome truck stop diner a ragtag band of people huddle and try to survive against a convoy of murderous 18 wheelers. Ex con Bill (Emilio Estevez) somehow manages to find love in the middle of the apocalypse with hitchiker Brett (Laura Harrington). Newlyweds Curtis (John Short) and Connie (Yeardly Smith) dash into the Dixie Boy for the worst honeymoon anyone’s ever had. And poor Deke (Holter Graham) escapes a baseball game where his coach has been killed by a sentient vending machine and a steamroller has, well, steamrolled his fellow players to find that his dad didn’t make it. But it’s the secret that slimeball owner Hendershot (Pat Hingle) is hiding in the basement that just might be all of their ticket to safety. 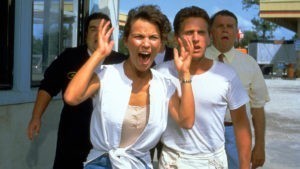 OK Let’s get it out of the way first: Maximum Overdrive was a huge flop. And it flopped despite having:
A Stephen King story
Stephen King Directing (the only time before or since)
An AC/DC greatest hits album as the soundtrack, including hit single in Who Made Who
Spectacular practical effects
One of the most memorable trailers in history
Support of Dino DeLaurentis who had tremendous success with many other King book to film transfers 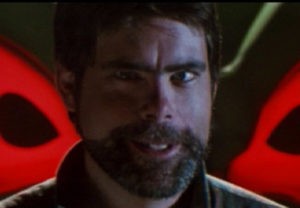 So yeah, it fizzled at the box office. But then something really cool happened, it went to become a cult classic due to continuous repeat showings on cable, probably chopped down most of the time to 4:3 (ick). And some of the unknown stars went on to be big deals in their own right. Yeardley Smith has been Lisa Simpson for 25+ years of TV among a ton of other stuff. And you almost can’t recognize Better Call Saul / Breaking Bad’s Gus Fring in “Video Player” played by a young Giancarlo Esposito.

This Vestron Video release is a love letter to what Maximum Overdrive always deserved to be. A missed hit. It’s got a great transfer of a somewhat uneven film. It’s got a new 5.1 soundtrack that beefs up the gunshots, explosions and vehicle carnage. It’s got over 2 hours worth of documentary features. It’s got TWO new audio commentaries.

What it doesn’t have is any input from either Stephen King or Emelio Estevez, which is a bummer, but I guess we can forgive them for distancing themselves all these years. But those of us who have always loved MO can tell them, rightly, that there is nothing to be ashamed of. Maximum Overdrive was simply ahead of it’s time and prescient technologically, and a few bad decisions like goofy pre and post-logue banners talking about UFOs and plot holes kept it from being a mainstream hit. But WE know it’s a classic that deserves praise for its unabashed goofy fun and human connection. And like so many of the interviewees say in the material here: It deserves either a sequel or a remake. In a world (ha!) where we are all plugged in all the time and technology could do sentient machines so much more justice these days, either would be a smash. So what do you say, Mr. King?

Maximum Overdrive was shot as a B movie and it shows. Lots of scenes are dramatically soft, and there is visible grain throughout. Still it was shot ultrawidescreen and framed terrifically, with pleasing color that accentuates the evil Happy Toyz goblin, shows the gritty realism of the trucks, and is able to look great for the human characters. This transfer does the best job it can with source material that is, in a word, problematic. 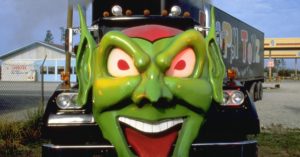 One are where this disk reallllly shines is in the new 5.1 transfer. Sure there is an original stereo track on there if that’s your thing, but for my money this new DTS 5.1 HDMA version is a keeper. Punchy for the weapons and crashes, sharp for the AC/DC music.

Maybe the music could have been integrated a little bit better originally, but this has always been one of my favorite sountracks of all times. From Bon Scott era Ride On to new instrumental tracks D.T. and Chase the Ace, to the hit Who Made Who this sountrack is an absolute blast. 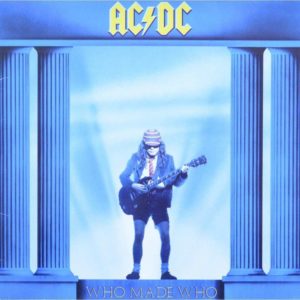 It took me over 2 hours to go through all of that, smiling all the way, and I didn’t even touch the commentaries. Any fan will be just a smidge disappointed that there is no input from Estevez or King, but the sheer volume of other great content more than makes up for it.

What we ALSO don’t get is any actual footage from the cut content that was deemed too violent for release. No actual visuals but plenty of hints from folks who created it that it’s out there somewhere. So that’s something to look forward to someday, maybe!

With plenty to remind of us of how great Maximum Overdrive was in its own right, with or without mainstream acceptance, this Vestron Video release is a welcome take on one of my favorite movies. I’d love nothing more than a sequel or a remake, I think either done right with 2018+ technology could be brilliant and mad fun. If those never happen at least we’ve got this release, which is recommended.

Thanks for the review, I took a chance and pre-ordered this awhile back. It fully exceeded my expectations. The extras are wonderful. I was one of those kids that saw this countless times on cable back in the day. Definitely a big step up from the old DVD that I had.

Thanks for the kind words and thumbs up, @skylark68 =)

Thanks for the review! One nitpick: It's Stephen King, not Steven King.

I had no idea this has a cult following.

I saw it in the theaters and have no desires to sit through it again.

SD_Brian said:
Thanks for the review! One nitpick: It's Stephen King, not Steven King.
Click to expand...

Wraaa, I always mess that up! Will fix it tonight.

SD_Brian said:
Thanks for the review! One nitpick: It's Stephen King, not Steven King.
Click to expand...

Fixed!
You must log in or register to reply here. 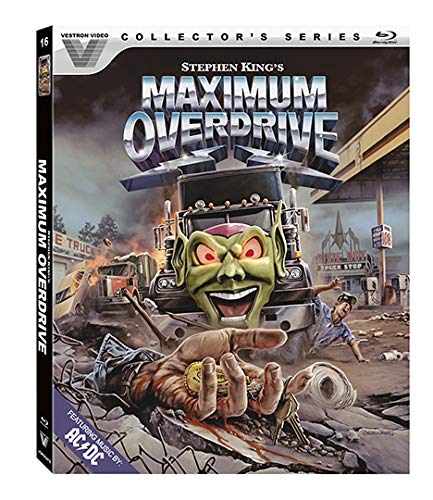