Forum List What's new Dark Style Change width
Log in Register
What's new Search
Menu
Log in
Register
Navigation
Install the app
More options
Dark Style
Close Menu
Posted on July 1, 2018 by Josh Steinberg
You are using an out of date browser. It may not display this or other websites correctly.
You should upgrade or use an alternative browser.
Jean Simmons is the best thing about this melodrama. 3 Stars

Jean Simmons stars in the title role in this 1950s CinemaScope melodrama, which is technically proficient but often dramatically inert. Still, the quality performances, aided by David Raksin’s lush score, result in a film that is surprisingly watchable.

Hilda Crane stars the luminous Jean Simmons in the title role, as a twice-divorced woman returning to her hometown after a failed attempt to live in the big city. Upon returning to the suburbs, she’s immediately greeted by her overbearing mother (Judith Evelyn), who wants Hilda to pick a suitable husband and settle into a respectable life of a 1950s housewife, rather than the independent career woman that Hilda wishes to be. Competing for Hilda’s affections are Russell Burns (played by Guy Madison), a well-to-do local builder whose kindness is only matched by his blandness, and Jacques DeLisle (played by Jean-Pierre Aumont), a professor that Hilda has an illicit history with. Though Hilda’s mother would prefer that she marry Russell, she is more drawn to Jacques’ aggressive style of courtship. Essentially, Hilda finds herself having to choose between a respectable man whom she feels nothing for but who will love her dearly, or an adventurous man who will show her an exciting time but has little consideration for her. When Hilda makes the safe choice of Russell, his own mother (played magnificently by Evelyn Varden) does everything in her power to sabotage the couple’s happiness.

Director Philip Dunne (who was also responsible for Twilight Time’s Blue Denim) is adept at this kind of character-driven storytelling. Though the scenarios and conflicts faced here are very distinctly of a time and a place that no longer exists, at the time of filming, Hilda’s trials and tribulations would have been current. As embodied by Jean Simmons, Hilda is a woman who wants to experience more from life than what would be allowed for a woman of that time. She was once taught by her father to “live like a man and still be a woman,” but having built her identity around that philosophy, is finding that there is little room in the world she inhabits for someone that fits that description.

Perhaps the most dynamic relationship in the film is not the one between Hilda and any of her male suitors, but that of Hilda and her future mother-in-law. Evelyn Varden as Russell’s mother is the film’s most repulsive (and possibly most interesting) character because of her abject dislike for Hilda. She is convinced that her son can do better, and has a long history of crying wolf in the direction of anyone Russell has ever shown interest in. Though her histrionics had been enough to drive away previous women, in Hilda she’s met her match; if anything, her desire to push Hilda away only makes Hilda more determined to pick Russell as her suitor.

Unfortunately, the film veers too heavily into melodrama too often, and pulls some of its punches. The production code of its time would only allow for certain topics to be danced around rather than explicitly covered, which often robs Hilda of the characterization necessary for her to be a fully sympathetic character. She is never allowed to be as shocking or as controversial as everyone treats her, which can lead to the negative treatment she often receives as seeming unmotivated by the story. At the same time, the choices being offered to Hilda are never as restrictive as she treats them, which make some of her choices and reactions seem more like the tantrums of a spoiled brat, rather than coming across as well-earned resentments from a person too long denied agency. It’s a tight line to walk, but too often, the film is content to go with the most melodramatic reading possible.

Hilda Crane is presented in its original aspect ratio of 2.55:1.  (The packaging mistakenly lists the aspect ratio as 2.35:1.)  The transfer is very clean and clear, with a very minimal but natural looking grain. As with other CinemaScope productions of this time period, the image is not quite as sharp as modern productions, but is nonetheless beautiful to look at. Color appears rich and unfaded, with natural looking flesh tones and good contrast.

There are two different audio options available on this disc, both presented in lossless DTS-HD MA: a 5.1 option and a 2.0 option. Though the disc unfortunately does not provide any information as to the provenance of these tracks, both are very pleasing, with well-recorded dialogue easy to understand, and David Raksin’s lush score elevating the entire production. The 5.1 version provides a slightly wider soundstage, but both sound very good, with no hiss or other age-related artifacts present.

Optional English SDH subtitles are available on the disc.

Jean Simmons: Picture Perfect (44:24, SD) – This installment of the A&E Biography series presents an overview of the life and career of Jean Simmons. Though she battled insecurities during periods of her real life, her story ultimately has a happy ending as she grew more comfortable in her own skin after her most prominent years wound down.

Original Theatrical Trailer (02:14, SD) – The trailer asks audiences to determine for themselves if Hilda’s story is shocking or shameful. It’s in rough shape, which only serves to highlight how good the presentation of the main feature is.

Booklet – Julie Kirgo contributes an insightful essay which gives credit to the film for being more subversive than might be readily apparent on first look. Her essay is complemented by a series of production stills and original poster art.

Hilda Crane is a melodramatic soap-opera type of picture which could only have been made during the 1950s. Though it may seem dated by today’s standards, the solid performances and shorter running time make the film more easily watchable than might be expected. Though the disc is somewhat light on extras, the presentation of the main feature is top-notch.

Excellently written review Josh, but one correction. The composer is David Raksin, not Raskin.

Overaggressive spell check strikes again! I will try to fix it later. Thanks!

Very good review. Jean Simmons was one of the finest actresses to grace the screen and often gives a performance of greater depth and intelligence than the screenplay itself provided. Pity the male co-stars in this film are adequate at best. Someone like Montgomery Clift would have been ideal.
Philip Dunne is often unsung and underrated. Can we get a campaign going for TT to release PRINCE OF PLAYERS and THE VIEW FROM POMPEY'S HEAD?
Both are lush Cinemascope dramas with impressive scores, like (THE MANY LOVES OF) HILDA CRANE.
Last edited by a moderator: Jul 6, 2018

lionel59 said:
Evelyn Varden is monumental as the Mother in Law from hell and her pre-wedding confrontation with Hilda is the most entertaining scene in the movie.
Click to expand...

I agree completely - I customarily jot down some notes as I’m watching and I made a big note of that exchange. Although I didn’t love the movie as a whole, I loved that scene!

lionel59 said:
. . . . Philip Dunne is often unsung and underrated. Can we get a campaign going for TT to release PRINCE OF PLAYERS and THE VIEW FROM POMPEY'S HEAD?
Both are lush Cinemascope dramas with impressive scores, like (THE MANY LOVES OF) HILDA CRANE.
Click to expand...

The Inspector (AKA Lisa) is still due out at some stage in the U. K on Blu-ray.

Thanks for the tip Robin9. LISA/THE INSPECTOR is due for UK release on July 30 of this year. The Fox Archive release was 4:3 LBX, so this should be a major improvement. The extras seem to be a bit minimal for such an interesting film with a good cast. Still, we should be thankful for a blu ray version of another Dunne feature.

lionel59 said:
Thanks for the tip Robin9. LISA/THE INSPECTOR is due for UK release on July 30 of this year. The Fox Archive release was 4:3 LBX, so this should be a major improvement. The extras seem to be a bit minimal for such an interesting film with a good cast. Still, we should be thankful for a blu ray version of another Dunne feature.
Click to expand...

I pre-ordered this disc when it was due to be released in April. My pre-order was cancelled because no-one knew when the disc would come out. I'll certainly buy it as and when it does finally appear.

THE INSPECTOR/LISA has been delayed again. Hopefully not for much longer. I have pre-ordered it. I wonder how many others have.

lionel59 said:
THE INSPECTOR/LISA has been delayed again. Hopefully not for much longer. I have pre-ordered it. I wonder how many others have.
Click to expand...

Lionel, this is getting beyond a joke. Either the high definition master has been prepared and provided or it hasn't. I notice we're never given an explanation for these delays.

I received a notification today that THE INSPECTOR is now available. My pre-ordered copy has not been despatched thus far. The website is now saying it is in stock. No cover image as yet. Time will tell....

lionel59 said:
I received a notification today that THE INSPECTOR is now available. My pre-ordered copy has not been despatched thus far. The website is now saying it is in stock. No cover image as yet. Time will tell....
Click to expand...

Lionel, thanks for that. I'll go on Amazon U. K. later today and see if I can pre-order.

LISA now delayed until 2020,which I assume means there is no fixed date. Maybe TT will beat them to it .

Somebody needs to retitle this thread "While we wait for The Inspector AKA Lisa", because it obviously has nothing to do with the Blu-ray of "Hilda Crane".

And the Blu-ray of Hilda Crane is a stunner.

Well, the connection is that Philip Dunne directed both movies and Robin9 and I are fans of his often underrated work....

Mark-P said:
I just got this as a Christmas gift. And for the record, even though it's probably irrelevant to most people, the aspect ratio on this disc is actually 2.55:1, not 2.35:1.
Click to expand...

Just watched this last night, amazing picture quality, and I'm glad that someone else noticed that the aspect ratio sure isn't 2.35:1! So I assume the film was originally in 2.55:1, and the description on the case (and elsewhere, IMDB etc) saying 2.35 is a "mistake"? I really liked Judith Evelyn in this one, especially after just seeing her in Rear Window the night before!

I've updated the review to reflect that the aspect ratio is actually 2.55:1 rather than the 2.35:1 that the packaging states.

Directional dialog?
You must log in or register to reply here. 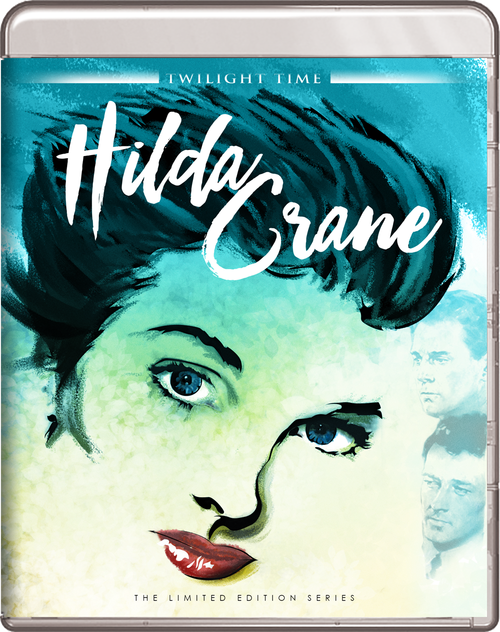