A coming-of-age story based on writer-director Paul Mazursky’s own experiences as a young man looking to leave behind his Brooklyn roots to become an actor, Next Stop, Greenwich Village is a poignant tale that will be even more affecting to those viewers who share a similar background.

Paul Mazursky began his career as an actor before transitioning to the writer-director role that he’s best remembered for today. In Next Stop, Greenwich Village, Mazursky looks back to those early days and recreates the experience of leaving his Jewish neighborhood in Brooklyn for the more bohemian Greenwich Village. Drawing from his own memories, Mazursky weaves together the tale of Larry Lipinsky (played by Lenny Baker) as Larry tries to find his place as an actor and a person in Greenwich Village circa 1953.

More episodic than plot oriented, this surprisingly wistful film looks back at a time and a place that no longer exits. Originally released in 1976 during a decade when Hollywood was more open to allowing filmmakers to tell deeply personal stories on a studio budget, the film will resonate with anyone who lived through this period in the way that later films like The Graduate and Garden State resonate with audiences who experienced their young adulthood in the time periods those films were set in. For those who came of age in later years, the film still works as a character study, but may be less immediately involving.

Though the film generally strives to maintain a more lighthearted tone emphasizing the innocence of Larry as he tries to make it in the acting world, there are moments of great darkness and uncertainty within that challenge Larry, revealing his naivety. As Larry’s overbearing mother Fay, Shelley Winters gives a terrific performance as a woman woefully ill-equipped to allow anyone in her orbit even a modicum of space to exhibit signs of their own personality. The tighter that Fay tries to grip her son, the more desperate Larry is to escape; though the opening scenes revolve around Larry leaving home, throughout the course of the film, he realizes that moving to another borough is not nearly far enough to keep his mother from meddling in his affairs.

The film’s most memorable performances comes from Ellen Greene, who plays Sarah, Larry’s on-again, off-again girlfriend. Greene is terrific navigating Sarah’s many conflicting moods and emotions, imbuing life into a role which could easily have come across as one-note or melodramatic. Whereas Larry has a specific path in mind, Sarah’s goals seem more nebulous. Their relationship is ultimately troubled not only by the fact that they want different things from life, but also because Larry is unable to see just how far apart they actually are.

When Larry isn’t navigating the treacherous waters of his relationships with his girlfriend and mother, he’s trying to get ahead in the acting world, taking classes with a method-like coach (played to perfection by Michael Egan) and going on auditions. Look out for a very young Jeff Goldblum in a small role as another young actor competing for some of the same roles as Larry. (A funny recurring bit involves Goldblum’s character changing his name from something more Jewish-sounding to more blandly generic in the hopes that the new name will be more memorable, as Larry struggles to recall the supposedly more memorable new name.)

A trip to Greenwich Village wouldn’t be complete without a collection of bohemian friends, and Larry’s certainly live up to the caricatures. Leading the pack is a young Christopher Walken as Robert, the wise sage of the group whom Larry comes to discover is the biggest poser of all. Rounding out the group of friends are Lois Smith and Antonio Fargas in small but memorable roles as people doing their best to hang on while being different in a time that didn’t allow for differences. And Bill Murray appears ever so briefly as a legendarily absent member of their group who is often referred to but only quickly seen.

Next Stop, Greenwich Village is a film more concerned with evoking a feeling and painting a portrait of a specific time and place than it is with making its characters likable or its situations neat. Much like in life, many of the characters will reveal themselves to be something other than what they first appear, and the people who appear early on as wise friends will be shown to be as confused and lost as Larry, and perhaps more callous, by the film’s end. Even Larry will have his own moments of coming up short by the film’s end. But if the characters might let us down, it’s because they have real story arcs, and are able to grow and change as the film progresses, some for better, some for worse. They’re not all likable characters, but they feel like real ones.

Next Stop, Greenwich Village is presented in its original aspect ratio of 1.85:1 in a wonderful transfer. The image is clean and clear, with natural looking film grain that’s never obtrusive. The color palette leans more towards a muted look, but flesh tones appear natural. There are no issues with dust, debris or any other age-related artifacts. Quite simply, it looks as if the film has been pulled in pristine condition out of a time capsule.

The disc presents two audio options without giving much detail as to their provenance. One is a DTS-HD MA 2.0 audio track which has a mild but pleasing stereo effect. The other is also a DTS-HD MA 2.0 track (labeled as 1.0 on the disc menu) which appears to be monaural. Both are pleasing, with dialogue well recorded and always easy to understand. The track labeled as being 2.0 is perhaps slightly better for the separation given to Bill Conti’s evocative score, but both are solid, and neither exhibit any evidence of hiss or other age-related factors.

Optional English SDH subtitles are included on the disc.

Audio Commentary with Writer/Director Paul Mazursky and Actress Ellen Greene – Mazursky and Greene are recorded separately but weaved together seamlessly, for a lively track that looks back on the film’s production and themes. Though both occasionally resort to narrating the on-screen action, there is no dead air, and their comments are ultimately insightful and rewarding. Mazursky details which experiences were lifted from his own life and which have been embellished in the film, while Greene spends a lot of time discussing the acting process, and the freedom she was given to discover the character. The track starts off good and continues to improve as both speakers open up, making this a rewarding listen for fans of the film.

Original Theatrical Trailer (02:17, SD) – The trailer is light on plot details, preferring instead to emphasize the offbeat nature of the film’s characters.

Booklet – Julie Kirgo contributes an enthusiastic essay analyzing and praising the film, which is presented alongside production stills and original poster art.

Next Stop, Greenwich Village is a tender, loving ode to writer/director Paul Mazursky’s early adulthood. It’s a film that’s more about character than plot, though the characters are given room to grow as the film progresses. For anyone who lived through the 1950s in Greenwich Village (or came of age in a similar period or location), the movie will have a wonderful, nostalgic feel, but more modern viewers may not feel as connected with the film’s characters without that frame of reference. The Twilight Time presentation on disc offers a pristine visual and audio presentation of the film, along with a wonderfully insightful commentary that’s better than the average track. 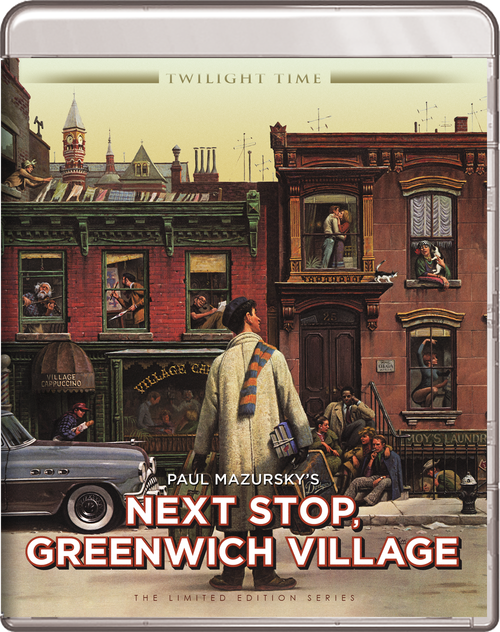