Forum List What's new Dark Style Change width
Log in Register
What's new Search
Menu
Log in
Register
Navigation
Install the app
More options
Dark Style
Close Menu
Posted on July 1, 2018 by Sam Posten
You are using an out of date browser. It may not display this or other websites correctly.
You should upgrade or use an alternative browser.
Us Earthmen have a talent for ruining things 0.5 Stars

In 1980 Ray Bradbury’s classic science fiction tale The Martian Chronicles was adapted for a TV mini-series. Rock Hudson headlined this three-night made-for-TV event, and it’s really saying something that I don’t think I ever heard anything good or bad about it until now. It must have quietly broadcast, took its lumps, and faded from view. Apparently it was made for Canada, and I can find American TV listings but I never saw it. 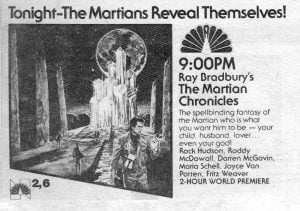 Earth is nearing all out war, and in a bid to save ourselves Humanity sends 2 scouting parties and they are each immediately wiped out without reporting back. Col. John Wilder (Hudson) brings a bigger crew and strange things begin happening to them immediately. One member, Major Jeff Spender (Bernie Casey), begins acting as tho he is channeling the defunct Martian race, and begins taking his team out via a strange gun type weapon. Wilder and his lieutenant, Parkhill (Darren McGaven) manage to subdue Spender and return to Earth. Earth somehow is untroubled by this and sends a fully colony worth of people of all walks of life to begin prepping Mars for hundreds of thousands more to follow. Events on both Earth and Mars continue to unravel.

I watched all 5 hours of The Martian Chronicles so you don’t have to.  I literally spent 5 hours saying “That is so dumb”, “That is a terrible idea”, “Man cocaine had to have had the entire production crew in its grasp”, and “No, they really aren’t going to spend an entire episode showing the first date between the last man and woman on Mars”.  And every time I was wrong. 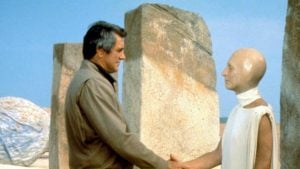 The editing is worse, lingering way past when the action has happened and often having the camera zoom off onto insignificant and out of focus details.

The story is remarkably boooring.

The music manages to be both hippy dippy and narcotic induced synth / theremin sci-fi floof.

And then somehow Bernadette Peters somehow shows up from out of nowhere, with her boobs barely contained in her dress, and proceeds to ruin whatever screen charm she might have had a chance to show.  Her vapid persona only seems to highlight the rampant misogyny that has come part and parcel with the first hundred years of science fiction. 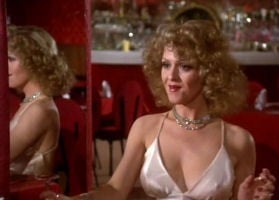 Ed Wood himself could not have made a more scientifically haphazard and unwatchable mess.  It would be perfect fodder for Mystery Science Theater but I doubt even they could stand sitting through five hours of this.  I found nothing redeeming in it at all, and think less of Ray Bradbury’s writing because of this production.

It’s 1.33 formatted from the original broadcast.  There’s a ton of grain, even in scenes where you might not expect to have it. The sets are kinda cool but other than that there’s not much good to report here. 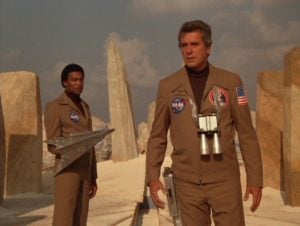 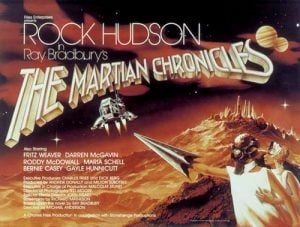 My favorite Martian: a 15 minute interview with the main Martian, James Faulkner.  Faulkner gives spinning this experience the old college try, but it’s clear he knew the production was a forgetable mess.  “It should be in the Smithsonian”, yeah right. 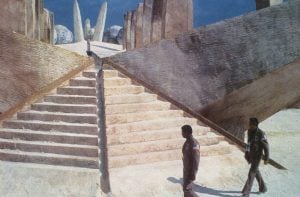 And 5 other Kino film trailers.

If nothing else, The Martian Chronicles provides a clear nadir from which television has climbed.  TV used to second class or worse, compared to today where TV is where we find some of our most compelling stories. 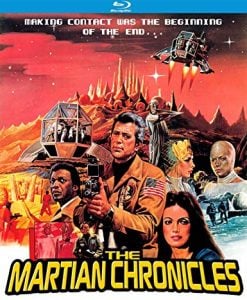 I can’t recommend TMC to anyone except for absolute Bradbury nuts or those who want to witness just how bad 70s TV could be.

You know for all the stupid things this bargain basement production does, its still better than that abysmal Fahrenheit 451 movie that aired last month on HBO.

I watched this when it was originally broadcast and while I no longer remember specifics, I remember liking it. But maybe that was in comparison to the other crap on TV at the time. I had previously read the book so I would guess that I thought it was consistent enough, otherwise I would have hated it. But maybe if I saw it again after all these years, I might agree with this review.

I was at the premiere of this and Ray Bradbury went to sleep during it. Personally, I like it. Especially the first part. To me the review seems so overly harsh it's hard to take seriously.

I think this review is overly critical. The program is very much of its time and should be judged accordingly.

I’d read the book when I first saw this many years ago, and I enjoyed it for what it was.

nara said:
I think this review is overly critical. The program is very much of its time and should be judged accordingly.

I’d read the book when I first saw this many years ago, and I enjoyed it for what it was.
Click to expand...

There were many terrific mini series in the late 70s early 80s. There was terrific sci-fi on TV. This does not match the quality of either.

I remember liking it when it originally aired, hence buying the DVD.

Sam Posten said:
There were many terrific mini series in the late 70s early 80s. There was terrific sci-fi on TV. This does not match the quality of either.
Click to expand...

I have all three on DVD: V-THE ORIGINAL MINISERIES; V-THE COMPLETE SERIES and V-THE FINAL BATTLE. I think I'm covered until I die!

Lord Dalek said:
You know for all the stupid things this bargain basement production does, its still better than that abysmal Fahrenheit 451 movie that aired last month on HBO.
Click to expand...

Francois Caron said:
What?!? Fahrenheit 451 was remade?
Click to expand...

Yep and it somehow managed to be bad on HBO.

V was terrific sci fi mini series of the same era. But things like Roots and Shogun really showed what a mini series could be and do

I remember seeing this when it aired and enjoying it. I was 14 years old at the time and it motivated me to go buy the book, which led to me becoming a lifelong Bradbury fan.

I don't know how it would hold up today, but I know that nostalgia gives me a lot of extra tolerance for the stuff I remember from that era. It's why I love the original "Heavy Metal" movie even though I recognize that objectively, it wasn't an especially good movie.

I will probably pick this up. I do hope that it's release will help motivate somebody to do a new adaptation of it, faithful to the stories and executed with more current SFX technology (which, let's face it, will probably look ridiculous to viewers 40 years from now.)

Even though I bought the DVD to see if I understood it more than when it originally watched it, I still didn't.
Last edited: Jul 2, 2018

Ummm, seeing a cloud filled sky on a supposed Martian landscape at the very beginning of the show kinda took me outta it immediately.

Richard V said:
Ummm, seeing a cloud filled sky on a supposed Martian landscape at the very beginning of the show kinda took me outta it immediately.
Click to expand...

The water streams did that for me. But that was after about 40 minutes of expository and confusing space launches that failed to set up a meaningful plot. I get that the idea of a chronicles is supposed to present a number of interwoven perspectives and disjointed narratives, but they went a loooong time before you could figure out what the long term idea was going to be.
J

Has anyone actualy watched the blueray and can review it?

Its not that bad at all. Typical sci-fi from the era it was made &amp; Rock Hudson's star quality carries the series. Also quite an unusual series with some atmospheric moments (many remind me of the TOS later episodes). They showed this on TV in the UK when it first came out I seem to remember seeing it back then.

jperez said:
Has anyone actualy watched the blueray and can review it?
Click to expand...

Well to be fair, you disliked the series so much that you had very little interest in giving an objective review of the picture and sound quality, which is what most of us come here for since we generally already have an opinion on the content itself.
You must log in or register to reply here.