Based on the story of a real-life Italian female serial killer, Mauro Bolognini’s Gran Bollito is a black comedy-drama that follows its own unique course traversing through sometimes familiar and yet also uncharted territory in the serial killer genre.

Based on the story of a real-life Italian female serial killer, Mauro Bolognini’s Gran Bollito is a black comedy-drama that follows its own unique course traversing through sometimes familiar and yet also uncharted territory in the serial killer genre. Featuring an international cast of actors, some of whom at times playing dual roles of different genders, Gran Bollito is one strange bill of goods.

Madame Lea (Shelley Winters) is disturbed to learn that her beloved son Michele (Antonio Marsina) is seriously involved with a school gym teacher Sandra (Laura Antonelli), and she seeks a way to express her displeasure at the universe for potentially taking her son away from her (in the days leading up to the outbreak of World War II, Michele is also expecting any day to receive his draft notice for his military service). Lea had already made a pact with Death when it robbed her of twelve children in fifteen years either through stillbirth or early childhood disease, but the thought of losing Michele sends her into a paroxysm of violence preying on three different female friends who had had no success with the opposite sex. First Berta (Alberto Lionello) who was leaving Italy anyway to reunite with an ailing husband in America, and then the homely Lisa (Max von Sydow) and entertainer Stella (Renato Pozzetto). But Lea isn’t merely killing for sport; she’s using the byproducts of her murders to make soap and foodstuffs which all of her neighbors are enjoying.

The story and screenplay by Nicola Badalucco and Luciano Vincenzoni are based on the case of Leonarda Cianciulli, the Italian serial killer best known as the “Soap-Maker of Correggio” (though the filmmakers are adamant in a prelude to insist this is not a biography of any formerly living person). She, too, killed three women before being brought to justice, turned in by her friends, and that’s what happens in this movie, too. But the movie is also about so much more: a satirical sneer at the Catholic Church (a gorgeous priest played by Franco Branciaroli is the object of lust by all of the matrons in Lea’s social group), an examination of smothering mother love that borders on incest (a very uncomfortable scene of Lea bathing her grown son and toweling him off; she also kisses him lovingly and lingeringly on the lips), a figurative comment on man’s tendency to cannibalize his friends (except here, they do eat their friends and use their remains to bathe with as well). And what director Mauro Bolognini was suggesting by having Lea’s three victims all performed by male actors playing the females is anyone’s guess (they also are all sneaked back into the movie after their characters’ deaths as new male characters: von Sydow as a detective, Lionello as a banker, and Pozzetto as a messenger). Directorially, Bolognini tends to favor close-ups (perhaps relying too much on them), but he does film the three slayings discreetly either in shadows or quick cuts before the clever hits the necks of the victims, so there’s no Grand Guignol here. But it all seems rather pointless, too, as Lea’s crazed behavior doesn’t stop the war from happening, doesn’t prevent her son from being called up, or his girl friend from getting pregnant, and seems just an exercise in futility from both her standpoint and from the standpoint of the viewer, too.

By 1977, Shelley Winters had gone through the elderly actress horror cycle in Hollywood (What’s the Matter with Helen and Who Slew Auntie Roo?), done disaster movies (memorable work in The Poseidon Adventure), and had even done a Roger Corman quickie, too (Bloody Mama), so it’s no surprise to find her turning up in something like this. The woman lived to act, and she’s very good as the mother intent on keeping her son to herself through any means necessary (though why she didn’t make Sandra the target of her bloodlust early on remains a mystery). Max von Sydow is having a high old time in his two roles though he’s one of the least convincing women in the history of the screen (he’s no Jaye Davidson). English screen star Rita Tushingham has some good moments as the priest’s overly attentive sister, and Laura Antonelli is lovely as Sandra. Milena Vukotic plays Lea’s imbecilic servant Tina who nearly gives the game away on a couple of occasions. The film’s two gorgeous male co-stars Antonio Marsina as Michele and Franco Branciaroli as the priest Don Onorio both service the story well, their striking good looks being their main functions in the story being told. Renato Pozzetto and Alberto Lionello both inhabit their women’s clothing more convincingly than von Sydow does, and their male roles, which are much less vital to the film than his detective character, do allow both to show their versatility in a small way.

The film’s 1.85:1 theatrical aspect ratio is presented in a 1080p transfer using the AVC codec. This is not the most striking transfer in the Twilight Time hall of fame. Sharpness is never better than good and is sometimes quite soft, possibly to soften the male actors playing their opposite gender roles and to take a few years off Shelley Winters’ Lea. Color looks quite dated and is very pale throughout though the glimpses of blood that we get do come across more vividly than one might expect. Black levels are fine. The English subtitles are printed in white and usually are easy to read except in the prologue where they are superimposed over white Italian text on the screen. The movie has been divided into 24 chapters.

The DTS-HD Master Audio 2.0 mono Italian sound mix has been post synched, of course, due to the international cast, so the dialogue has that flat, toneless sound typical of post dubbing. The sparse music cues and the atmospheric effects mix with the dialogue smoothly. There are some sporadic pops and noise on the soundtrack though it’s not prolific.

Audio Commentary: film historians David Del Valle and Derek Botelho discuss the actual murder case the film is based on and also talk about Shelley Winters’ career and the film’s odd mix of tones and tempos.

Six-Page Booklet: contains some color stills, original poster art on the back cover, and film historian Julie Kirgo’s interesting analysis of the material.

Certainly not one of Twilight Time’s mainstream efforts, Gran Bollito is an interesting if not altogether satisfying variance from the norm of serial killer films. The cast is engaging, and the movie treads its own unique path that you may find quite intriguing. There are only 3,000 copies of this Blu-ray available. Those interested in purchasing it should go to either www.twilighttimemovies.com or www.screenarchives.com to see if product is still in stock. Information about the movie can also be found via Facebook at www.facebook.com/twilighttimemovies. 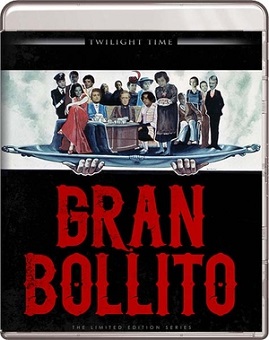