Cunning psychological thriller has lost none of its spark. 4 Stars

There’s a soft, dreamy quality embedded in the psychotic and murderous foundation at the heart of Noel Black’s Pretty Poison.

There’s a soft, dreamy quality embedded in the psychotic and murderous foundation at the heart of Noel Black’s Pretty Poison. It’s one of a handful of critically lauded but underperforming dramas from the late 1960s. Featuring career defining performances from its two leads, wonderfully evocative photography, and a script which does a number on the audience before it’s finished, Pretty Poison remains a rarefied gem of small filmmaking.

Released from a mental institution after years of treatment after setting fire to his home as a fifteen-year old with his mother inside, Dennis Pitt (Anthony Perkins) ignores his parole instructions from his parole officer Morton Azenauer (John Randolph) and settles in a small manufacturing town working in a local chemical company. When he notices waste pollution dripping into the nearby river, his psychoses take over and he begins thinking he’s a CIA operative assigned to catch big business polluting the waterways. He enlists seventeen-year old Sue Ann Stepanek (Tuesday Weld) in his covert operation, but when things go awry, it’s Sue Ann who proves herself to be far more than an innocent high school girl. She’s, in fact, a girl on a mission of her own.

Lorenzo Semple Jr.’s screenplay (which won the New York Film Critics prize for writing that year) is based on the novelette by Stephen Geller, and it’s so cleverly constructed that it’s quite midway through the movie before we realize (as does the leading man) we’ve been taken for something of a ride with the movie turning far less whimsical and more diabolical the longer it plays. First-time feature director Noel Black uses some soft, effortlessly framed photography and lots of bucolic imagery to lull us into a sense of droopy, small town life only to shock us later on with images far less pastoral and much more lethal in nature while retaining a wonderful sense of camera placement to capture the subtleties of the actors’ performances. There’s a really terrific scene late in the film when Pitt is hiding in the woods as hooting owls, a couple rudely interrupted in their seduction, and a chameleon all bring him to the brink of hysteria. It’s here we know the protagonist role has switched from the male to the female, certainly proven when she almost runs him down as he’s fleeing on the road in a blind panic not knowing what to do or where to go. Yes, in today’s more PC-ridden climate, our eyes shoot up a bit at the thought of Dennis Pitt (Anthony Perkins was in his 30s when this was made, but the character was likely meant to be twenty-five or so) seducing a high school senior not yet eighteen (Tuesday Weld was actually twenty-four at the time of filming), but their love scenes are so sweet and natural that it ceases to be much of a concern, especially with the flip-flop the film takes later in its unspooling.

This was Anthony Perkins first movie back in America since 1960’s Psycho, and he must have been a bit trepidatious playing another mentally unbalanced character, but he pulls it off with the same quirky charm and innocence that make the character one the viewer will root for even when it seems he’s really off his rocker. Tuesday Weld’s is the more canny characterization using her stunning looks and vivacious schoolgirl manner to mask her real intentions. The always reliable John Randolph offers a terrific performance as the caring parole officer Morton Azenauer, and Beverly Garland has several standout moments as Sue Ann’s blowsy mother. Dick O’Neill has sarcasm down to a science as Pitt’s plant manager Bud Munsch, and Clarice Blackburn as Pitt’s landlady is likewise most effective in a sympathetic role. Yes, that’s the very young Ken Kercheval coming on to Sue Ann in the final sequence in the movie.

The film’s theatrical aspect ratio of 1.85:1 is faithfully reproduced in this 1080p transfer using the AVC codec. Fox has done a masterful clean-up on the movie leaving not a speck of dust or dirt to mar the image quality. If the color in a couple of shots looks a tiny bit dated or black levels seem more dark brown than black, those are small quibbles when the image quality is so good and detail is so strong. The movie has been divided into 24 chapters.

The DTS-HD Master Audio 2.0 mono sound mix is very typical of its era with the well recorded dialogue sharing the track nicely balanced with Johnny Mandel’s background score (smoother than one might expect from Mandel) and the atmospheric effects pertinent to the project.

Audio Commentaries: from 2005 comes the track featuring film historian Robert Fischer asking a series of very intelligent questions to director Noel Black. The disc also offers the additional insights of producer Lawrence Turman with incisive comments and analysis by historians Nick Redman and Lem Dobbs with him on a separate commentary track.

Deleted Scene Script and Commentary: the script pages (concerning an important unseen moment between Pitt and his landlady) are offered in step-through fashion. Also is the separate commentary about that deleted scene by director Noel Black which runs 3:12.

Six-Page Booklet: contains some tinted stills, original poster art on the back cover, and film historian Julie Kirgo’s effusive analysis of the movie.

Pretty Poison may not have been a hit in its day, but it’s one of those movies that has stood the test of time and emerged as far more worthy of attention than many of the more celebrated and illustrious movies of its year. There are only 3,000 copies of this Blu-ray available. Those interested in purchasing it should go to either www.twilighttimemovies.com or www.screenarchives.com to see if product is still in stock. Information about the movie can also be found via Facebook at www.facebook.com/twilighttimemovies.

That's an excellent review of an underrated film that I first saw when I was in the Navy in 1968. It made a huge impression on me then, and some years back I made a DVD-R from an airing on Fox Movie Channel; then I bought the Region 2 DVD; then Fox's Region 1 DVD; and now the superb Twilight Time Blu-ray.

When December's Twilight Time releases were announced I was surprised that more HTF members weren't mentioning it as a must-buy, from which I can only assume that a lot of them have never seen it. It is easily one of the best films of the late sixties, and Roger Ebert called it "legendary" and "one of Hollywood's best sleepers."
Reactions: Twilight Time, Matt Hough and Flashgear
You must log in or register to reply here. 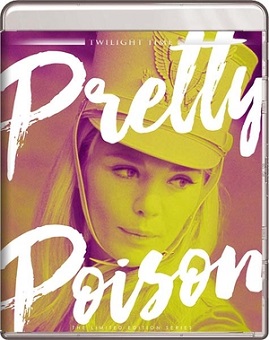