Forum List What's new Dark Style Change width
Log in Register
What's new Search
Menu
Log in
Register
Navigation
Install the app
More options
Dark Style
Close Menu
Posted on February 25, 2020 by Todd Erwin
You are using an out of date browser. It may not display this or other websites correctly.
You should upgrade or use an alternative browser.
Entertaining sequel 4 Stars

Frozen II picks up three years after the events of the first film, as Elsa goes in search of a voice only she can hear.

Three years after the events in Frozen, Elsa (Idina Menzel) begins to hear a voice singing to her, a voice that only she can hear. That is, until one night Elsa responds with a magical thrust, which the voice in turn responds with the five elements all but destroying Arendelle., forcing its citizens to flee to higher ground. Grand Pabbie (Ciaran Hinds) arrives with the trolls to provide his own insight as to what is causing all of this – Elsa must travel to the Enchanted Forest to right a wrong made long ago. Younger sister Anna (Kristen Bell), her boyfriend Kristoff (Jonathan Goff), his reindeer Sven, and snowman Olaf (Josh Gad) join her on the music-filled adventure where they discover what really happened to their parents, learn of their heritage, Kristoff fumbles trying to propose to Anna, and in the end bring peace to both Arendelle and the Enchanted Forest.

Frozen II plays it safe, for the most part, continuing the story in a similar fashion as the first film, and there seems to be more humor in this entry than the previous one, especially Kristoff and Sven’s 1980s style rock ballad duet framed as a music video of that era, including a very obvious homage to Queen’s Bohemian Rhapsody and even pokes some fun at the overplayed Let It Go from Frozen. The animation is exactly what one would expect from a Disney theatrical release, with colorful and detailed renderings down to the subtle freckles on the sisters’ cheeks. Where the movie falters is in its lack of truly show-stopping and memorable songs; Into the Unknown comes close but just misses the mark. Frozen II is a good movie, well-made and entertaining, but never quite hits the level of its predecessor.

Like most animated films, Frozen II was rendered and completed as a 2K digital intermediate, with Dolby Vision high dynamic range for its premium engagements. Disney’s 2160p upscale uses HDR10 high dynamic range to good effect, helping to expand the color gamut and provide better contrast than its Blu-ray counterpart. There is a slight uptick in detail, mostly in finer details like freckles and other facial features plus textures such as Olaf’s permafrost “skin.”

The default Dolby Atmos track on the UHD disc is a noticeable improvement over the very good DTS-HD MA 7.1 track on the Blu-ray. Sound objects are more precisely placed within the listening area and move more fluidly around the room. LFE has a bit more heft as well. But there is a sense of some minor compression in the overall dynamic range, with some of the big action sequences not reaching their full potential, even at a more calibrated reference level.

With the exception of the Sing Along subtitle track, all of the special features can be found exclusively on the Blu-ray disc.

Sing Along: A subtitle track featuring the lyrics to each of the songs as they appear in the movie.

Deleted Scenes (1080p; 17:58): Five scenes are presented in storyboard form and introduced by directors Chris Buck and Jennifer Lee – Prologue, Secret Room, Elsa’s Dream, Hard Nokk’s and A Place of Our Own.

Song Selection: Jump to your favorite song from the movie, with sing along lyrics included.

Digital Extras: Redeem your Movies Anywhere digital code and gain access to two exclusive special features – Meet the Lopezes (a look at the composers of the songs from Frozen II) and another deleted song, Unmeltable Me.

Although Frozen II lacks any show-stopping or memorable tunes and doesn’t quite live up to the original, it is still an entertaining movie, and most kids will likely eat this one up, too. 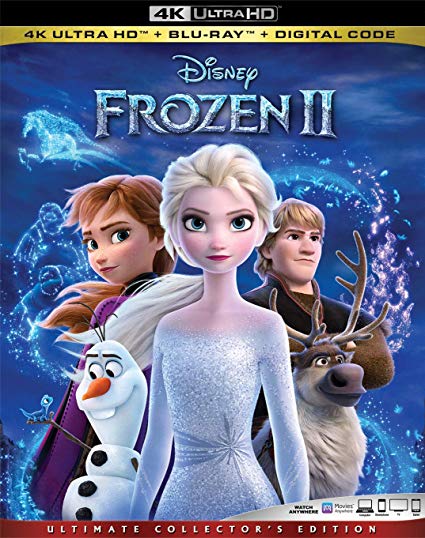