Forum List What's new Dark Style Change width
Log in Register
What's new Search
Menu
Log in
Register
Navigation
Install the app
More options
Dark Style
Close Menu
Posted on April 11, 2019 by Matt Hough
You are using an out of date browser. It may not display this or other websites correctly.
You should upgrade or use an alternative browser.
Gripping true-life story not well served by the DVD format. 3.5 Stars

One of the more lauded programs of the 2018-2019 television season was Showtime’s seven-part limited series Escape at Dannemora, directed by Ben Stiller and relating the true story of an infamous breakout from an upstate New York maximum security prison in 2015.

One of the more lauded programs of the 2018-2019 television season was Showtime’s seven-part limited series Escape at Dannemora. Directed by Ben Stiller and relating the true story of an infamous breakout from an upstate New York maximum security prison in 2015, Escape at Dannemora finds its uniqueness not in the sometimes tedious details of constructing the escape or the three-week manhunt once the breakout went down but rather in examining the fascinating personalities of the three primary individuals involved in the story: hacksaw murderer Richard Matt, cop killer David Sweat, and dissatisfied housewife and prison employee Tilly Mitchell.

Serving life terms without the possibility of parole, Richard Matt (Benicio Del Toro) and David Sweat (Paul Dano) dream of one day being free once again, but their dreams begin to find a possible reality when Matt stumbles on a passageway of pipes that leads from their third-floor honor block cells to a basement area that contains a heating duct unused in the summertime that can take the two cell neighbors straight to the outside. Being smaller of stature, the work of cutting and tunneling through brick, concrete, and metal falls to Sweat, but to get the tools they need to carry out the work, the men must play up to tailor shop supervisor Tilly Mitchell (Patricia Arquette), a middle-aged, frumpy housewife who dreams of the excitement and danger of sexual liaisons both in and out of prison with these two inmates. Tilly wants to leave town with the guys when they are free, but her sweetly dimwitted husband Lyle (Eric Lange) is an obstacle she’s going to have to deal with in addition to her own fears of getting caught participating in the prison break.

Director Ben Stiller and his writers, including creators Brett Johnson and Michael Tolkin and also Jerry Stahl, set up their tale rather methodically over seven episodes offering introductions to the central characters in episode one, the hatching of the plan in episode two, the start of the escape tunnels in episode three, the major obstacles of brick and concrete walls and the heating duct in episode four, a dry run of the escape followed by a surprise prison riot and then the escape in episode five, and the manhunt and subsequent arrests of the perpetrators in the final episode seven. But in case the audience’s rooting interest for the success of the three guilty protagonists gets too rose-colored, episode six is inserted right before the finale to give us the horrifying backstories of how Matt, Sweat, and Mitchell came to be a part of Dannemora. That episode and episode five which precedes it and shows director Stiller at his zenith in planning shots and executing them in involving and creative ways, brought him the Directors Guild of America Best Director of a Limited Series prize at the end of 2018.

While the focus is naturally on the two very different prisoners who effect this escape: the slightly psychotic and dictatorial Matt and the intelligent, methodical, and quick-witted Sweat in the most capable hands of Benicio Del Toro and Paul Dano respectively, it’s Patricia Arquette’s blowsy Tilly who has walked away with the lion’s share of the praise for her galvanizing performance. Selfish, curt, and rather slow, Tilly has delusions of romantic grandeur that she hopes this prison break might initiate, but her fragile ego and lack of foresight prove to be too much for her to handle, all expertly delivered by the Oscar and Emmy-winning Arquette. Already the recipient of the Golden Globe and SAG awards for this performance, an Emmy nomination seems almost a foregone conclusion. David Morse as the chief guard on the cellblock and Eric Lange as the sweet but dim husband of Tilly also make major impressions.

The series has been photographed in the widescreen aspect ratio of 2.40:1, and the image has been anamorphically enhanced for widescreen televisions. While color is first-rate throughout and the widescreen aspect ratio gives the series the look of an epic film, sharpness varies noticeably, particularly in long shots. But the major problems with this release lie in the compression artifacts which plague especially episode one which is so filled with aliasing, stair-stepping, and moiré that it’s almost unwatchable. Subsequent episodes gain in solidity, but there is still some minor aliasing present in almost all of the episodes. Black levels aren’t the blackest one will ever see either. The project really needs a high definition transfer to deliver decent picture details to the viewer.

The Dolby Digital 5.1 sound mix constantly makes its surround presence known, but the balance between the dialogue track and the background music is woefully out of step, particularly in the first and last episodes where the music completely overshadows what is being said. The overall volume level of the DVD production is unnecessarily high, and it will be necessary to reduce volume levels almost a third to bring the levels to something that prevents audio distortion.

Primary Sources (7:36): director Ben Stiller hosts a look at the actual prison break in 2015 with a succession of law enforcement personnel who describe their roles in the capture and arrest of the suspects.

Making of “Sweat’s Run” (5:54): though it’s described in great detail in the commentary for episode five, this featurette likewise discusses the production of the nine-minute sequence when Sweat makes a dry run of his escape path, appearing as a single camera shot but which is actually seventeen different scenes stitched together seamlessly. Production designer Mark Ricker, cinematographer Jessica Gagné, and various special effects experts join director Ben Stiller in discussing what makes up this bravura sequence.

The limited series Escape at Dannemora is well worth watching, but this DVD set is not the most amenable way to experience this gripping true-life story. Presented originally on Showtime, a high definition broadcast would be the way to go in order to get the most dramatic bang for the buck with this memorable biographical drama. 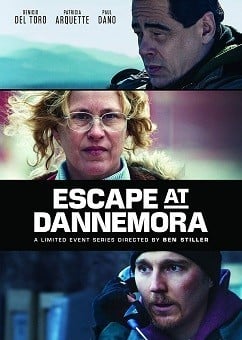