The title of Jean-Marc Vallee’s Demolition is both literal and metaphorical: the film’s leading character both participates in large-scale physical destruction of property while also demolishing his inner being, all in a kind of walking nervous breakdown after the death of his wife. It’s a comedy-drama with obvious flaws that nevertheless manages to touch with impact, but it’s a bumpy and uneven route for the filmmakers to get where they’re going and for the viewer to stay with them for the long haul.

When his wife (Heather Lind) is killed in an unexpected collision, easygoing stockbroker Davis Mitchell (Jake Gyllenhaal) doesn’t immediately register any emotion. Having drifted through his life up until now not really paying attention to particulars, he’s now faced with a distraught father-in-law (Chris Cooper) who can’t understand Davis’ lack of emotion and unwillingness to grieve openly or set up a foundation to honor his wife’s memory. Davis is introduced to a vending machine company’s public relations officer Karen Moreno (Naomi Watts), a quirky single mother of a rebellious young teen Chris (Judah Lewis) who’s involved in his own struggles with adolescence and sexual identity. Davis seems content working with the confused youngster to sort out his life rather than deal seriously with his own except that his wife’s death has unleashed in him a desire to demolish material possessions as a way of cleansing his soul before he can rebuild it.

Bryan Sipe’s screenplay and Jean-Marc Vallee’s direction work together in a herky-jerky fashion to careen the viewer through Davis’ conflicted psyche by alternately fashioning scenes that ache with sadness (Chris Cooper’s distraught father Phil excels in all of his work), explode with raucous rock (teenage Chris has an eclectic taste in very loud rock music), meditate in pastoral solitude (Karen likes to lie in her tub sans water to think), or resonate with unpredictability at any given moment (a lengthy montage of Gyllenhaal bopping around Manhattan acting quite eccentrically) and often on top of one another. Sipe uses the letters Davis sends to the vending machine company (which Gyllenhaal blithely narrates on the soundtrack) to provide exposition into the married life of Davis and Julia (with frequent arty snippets of Julia in the past intercut with scenes in the present, not a motif that strengthens the storytelling), but the flippant tone of the notes seems sometimes at odds with the sorrowful events of the story continuing the writer and director’s efforts to send mixed messages to its audience. The wholesale destruction of his own home is not particularly edifying as a viewing experience either, but Davis’ connection with the foul-mouthed, troubled Chris does put the film on sturdier ground and, even more than Davis’ interaction with Chris’ pot-smoking mom Karen, constitutes the movie’s most memorable and valuable sequences.

Jake Gyllenhaal has put together three very diverse troubled characters (with three very different looks) in his last three movies (Nightcrawler, Southpaw, and this film) and while this may be the most audience friendly of the three, his laid back work for much of the movie doesn’t always ring true (is it catatonia or indifference that he’s acting?) though one would have to have a heart of stone not to find his inevitable breakdown at his wife’s loss near movie’s end heartfelt and impressive. Naomi Watts subverts her natural beauty and ebullience to play the soft-spoken, often bewildered Karen refusing to make her into a typical leading lady but rather making her work a true character turn. Chris Cooper gives the film’s best performance as the grief-stricken father trying to understand the outrageously unpredictable behavior of his son-in-law. Judah Lewis’s unruly son certainly rings true (though a melodramatic sequence late in the movie featuring his character sends the film off in another needlessly untoward direction), and C.J. Wilson as Karen’s bullying boss and live-in lover also seems right on the money.

The film’s theatrical aspect ratio of 2.35:1 is faithfully rendered in this standard definition DVD transfer which has been anamorphically enhanced for widescreen televisions. Sharpness is above average without being razor-edged, and color is likewise a tiny bit muted rather than expansive though skin tones seem true enough. Contrast has been consistently applied, but black levels are not especially deep. The film has been divided into 24 chapters.

The Dolby Digital 5.1 sound mix offers a professional blend of dialogue, music, and sound effects. Spoken words are relegated to the center channel while Susan Jacobs’ music supervision includes quite a few rock classics on the soundtrack piped through the fronts and rears often at excessive volume levels. Apart from the music, ambient sounds seem more front-directed than surround enhanced though the shocking collision in the early moments of the movie certainly gets the full blast of the entire soundfield.

Picture Gallery: two dozen behind-the-scenes shots taken during the film’s production may be flipped through automatically or manually.

Fine acting and a genuinely interesting story get unwieldy but occasionally sensitive treatment in Jean-Marc Vallee’s Demolition. The film was released on Blu-ray though only a DVD was sent for review. Regardless, fans of the stars or director may certainly want to risk a rental. 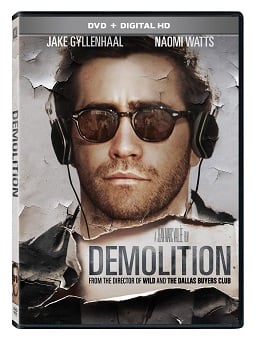