The notorious 1924 trial of killers Leopold and Loeb, disguised somewhat as cinematic historical fiction, gets something of an unusual treatment in Richard Fleischer’s Compulsion.

The notorious 1924 trial of killers Leopold and Loeb, disguised somewhat as cinematic historical fiction, gets something of an unusual treatment in Richard Fleischer’s Compulsion. Letting a brilliant trio of leading actors take center stage to the exclusion of showing visually much about the planning or execution of the actual crime or the detective work which uncovered its culprits, Compulsion may not be the juiciest trial film in the movie history books, but the personalities of its subjects more than make up for any lapses in conveying the intellectual and emotional fundamentals of this unusual story.

Judd Steiner (Dean Stockwell) and Artie Strauss (Bradford Dillman) are both teenaged graduate students whose intellectual superiority causes them to assume that their actions are above reproach. In killing a fourteen-year old neighbor of theirs simply as a way of experiencing every sensation life has to offer and assuming their superior intelligence will allow them to hide in plain sight as the police investigate, the boys make one little slip, a misplaced pair of glasses left at the crime scene, that will lead the police to Steiner’s door and ultimately bring both boys in for arrest. Internationally renowned lawyer Jonathan Wilk (Orson Welles) is brought in to defend the boys, one found paranoid and the other schizophrenic, to prevent their going to the gallows.

Due to the Production Code of the era, the homosexual relationship between the two young murderers is never addressed (one must look closely for subtext since the movie goes out of its way to insist the boys have more than a passing interest in women even though Steiner does seem to hungrily hero worship the extroverted Strauss), and the murder of the young boy is neither shown during the event itself nor is his lifeless corpse shown afterwards in the morgue, all of the killing’s gruesomeness portrayed on the faces of various actors who either see it or recount the murder. Richard Murphy’s screenplay based on the book by Meyer Levin doesn’t even have the trial sequences become a back and forth maelstrom between the bloodthirsty prosecutor Harold Horn (E. G. Marshall) and the wily legal eagle Jonathan Wilk (based, of course, on Clarence Darrow), thus lessening the potential for courtroom theatrics which would be satisfied the next year with another famous Darrow trial fictionalized somewhat for Inherit the Wind. Instead, once Orson Welles enters the picture in the last half hour, the focus turns mostly to him: his interviews of the boys and with the media and, naturally, his famous ten-minute soliloquy pleading for mercy for the two mentally deranged lads (cleverly, the defense isn’t one of insanity which would have required a jury trial but instead pleading the boys guilty with a plea to the judge for a merciful judgment). Throughout, director Richard Fleischer uses the Cinemascope screen interestingly by stretching group scenes to fill the frame and forcing close-ups to dominate encounters between the two young men especially as they spar and parry with one another for attention.

Orson Welles gets top billing though he’s only in the last third of the movie giving a masterful performance that never resorts to overt flourishes or bombast in his courtroom scenes and showing much more restraint than he was usually known for. Dean Stockwell and Bradford Dillman (who shared the Best Actor prize with Welles at the Cannes Film Festival) play their roles with terrific passion, Steiner with the 212 I.Q. who over intellectualizes the duo’s every move and Strauss who loves to showboat and basks in the attention of his peers and elders. Diane Varsi is somewhat tentative as Ruth Evans whom Judd takes a shine to and who has the same feelings of compassion and mercy that Wilk exhorts in the courtroom which brings her at loggerheads with Sid Brooks played by Martin Milner, a graduate student and reporter who actually undercovers the clue that eventually leads to the boys’ arrest. E.G. Marshall is dynamic and forceful as the wily prosecutor, Richard Anderson offers a commanding presence as Judd’s mistrustful older sibling, and Robert F. Simon as Lieutenant Johnson gets amusingly duped, led around by the nose by the arrogant Artie.

The original Cinemascope aspect ratio of 2.35:1 is offered in 1080p resolution using the AVC codec. Based on a new 4K restoration, Compulsion looks spotless with dynamic detail to be seen in close-ups and not a hint of twitter, flashing, or aliasing in all of those tweed and hounds tooth jackets the men seem to favor. The grayscale offers solid black levels (except in some of the rear process shots where blacks are somewhat milky, not a fault of the transfer) and crisp whites with excellent shadow detail. The film has been divided into 8 chapters.

The DTS-HD Master Audio 2.0 mono sound mix offers very good fidelity. Dialogue has been expertly recorded and has been blended with surety with Lionel Newman’s jazzy score and the atmospheric effects into a solid audio track with the elements all working harmoniously. There is no evidence of any age-related problems with hiss, crackle, flutter, or thumping.

Audio Commentary: film historian Tim Lucas offers an expert discussion of the film noting the careers of the stars and supporting players and analyzing the similarities and differences between the true life story and the screen adaptation.

Great performances and a fascinating tale of arrest and trial make Richard Fleischer’s Compulsion a rather unique example of historical crime fiction. Kino Lorber’s Blu-ray release of this new high definition restoration is aces all around and worthy of much praise. Recommended! 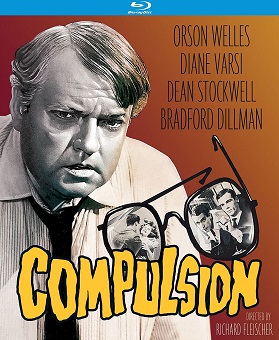