Forum List What's new Dark Style Change width
Log in Register
What's new Search
Menu
Log in
Register
Navigation
Install the app
More options
Dark Style
Close Menu
Posted on December 17, 2016 by Matt Hough
You are using an out of date browser. It may not display this or other websites correctly.
You should upgrade or use an alternative browser.
Lively, colorful Cinerama travelogue, the last of its kind 4 Stars

Cinerama’s Russian Adventure is a most entertaining final bow for the three-strip Cinerama process, and the movie has been brought back to be an enjoyable viewing experience by Dave Strohmaier and his band of hard working, expert craftspersons.

The majesty and variety of the people and places of the Soviet Union are captured magnificently in Hal Dennis Productions’ Cinerama’s Russian Adventure. Culled from several Russian films photographed in their version of Cinerama called Kinopanorama and edited down to a reasonable feature length for international distribution, Cinerama’s Russian Adventure is, like all of the Cinerama travelogues, alive with the sights and sounds of a place both remote and fascinating and is now brought back to us after having been thought lost for some time. It’s a fitting climax to a decade-or-so era of three panel widescreen filmmaking we’re never likely to see again.

Narrated by Bing Crosby in his patented laconic but ingratiating style, Russian Adventure takes us across six thousand miles of territory showing us the diversity of people and places within its borders, the Cold War in full force at the time but with nothing but positives set forth in terms of its citizenry, their occupations, and leisure pursuits. True to Cinerama, we are treated to several point of view treats: an invigorating sleigh ride on snowy landscapes, a quick trip through the crowded streets of Moscow, whooshing down ski slopes, and a pulse-pounding rafting trip down the Tisza River as loggers steer timbers to their final destination. We’re also thrown into the midst of reindeer races, visit Siberia to see new housing going up for its residents, and take an extended trip underwater off the Russian coast observing various marine life in its natural habitat. We’re also taken to both Poles: the Arctic to see Russian weather stations in action and the Antarctic to engage in a whaling expedition that leaves nothing to the imagination. A lengthy section from one of the Russian films mixes wildlife footage of Misha the Bear involved in slapstick antics to get honey, a wild boar hunt, and corralling wild antelope using riders on both horses and motorcycles, all of this footage with a decidedly different tone from most of the rest of the film.

The most spectacular highlights of Russian Adventure, however, all take place in Moscow as we get to experience the breathtakingly elaborate and beautiful subway system and are treated to a night at the Moscow Circus complete with clowns, acrobats on high wires and trapezes, trick ponies, and tamed lions, all of which allow spectacularly inventive camerawork to shine on the wide Cinerama screen. During the Moscow Carnival, fireworks offer vivid sky displays of light while the Piatnitsky folk dancers impress with their dexterity and fleet feet. Two different and even more world famous dance troupes get to show their stuff in the movie, too: the Moiseyev dancers perform a series of spirited folk numbers while the movie saves the best for the last: the Bolshoi Ballet company and school which begins training its future luminaries at very young ages and which then performs excerpts from five different ballets: “Flames of Paris,” “The Humpback Horse,” “Giselle,” “The Nutcracker,” and “Otello.”

Presented in the patented and very effective Smilebox aspect ratio which preserves the feeling and sweep of the three-panel process, Russian Adventure has been given a beautiful face lift to bring forth its natural colors and exciting imagery. Sharpness is excellent, and color, though sometimes inconsistent between the panels, is far better than we have any right to expect, and black levels are very impressive. Restoration expert Dave Strohmaier must have had a nightmare on his hands with stability between the three frames, the left frame being the most problematic, but it’s only noticeable early on and ceases to be a problem the longer the film runs. Age-related artifacts have been almost completely eliminated leaving no observable scratches, dust specks, or spotting with the join lines between frames nicely blended and often unnoticeable. The movie has been divided into 25 chapters.

The DTS-HD Master Audio 5.1 offers very pleasing orchestral sweep with its music through the entire soundstage. Bing Crosby’s narration and the occasional voice of someone on-screen come clearly through the center channel. Atmospheric effects likewise get spread in occasional pans from rear to front channels. The disc also contains the overture, intermission, entr’acte, and exit music.

Fortress of Peace (21:57, HD): a 1964 Oscar-nominated Cinerama short extolling the achievements of the Swiss Army and Air Corps in ground and air maneuvers showing them ready for defense should the need arise.

Concorde (15:07, HD): a 1966 short illustrating the construction of the Concorde aircraft, a joint project by British and French designers and engineers showing its sleekness, speed, and power.

Reconstructing Russian Adventure (12:43, HD): another one of restorationist Dave Strohmaier’s very entertaining and informative featurettes on the herculean efforts needed to bring the movie back into a quality viewing experience with several eye-opening before and after shots and split screen views on the work done on this project.

Cinerama Trailer Gallery (41:13, HD): a montage of trailers for the Cinerama and Cinemiracle features.

Old Cinerama Equipment (2:08, HD):  Craig and Hal Dennis Jr. show some of the equipment needed to work with Cinerama materials.

Program Booklet: a reproduction of the original program book enclosed in the case.

Cinerama’s Russian Adventure is a most entertaining final bow for the three-strip Cinerama process, and the movie has been brought back to be an enjoyable viewing experience by Dave Strohmaier and his band of hard working, expert craftspersons. Recommended!

Have my copy and will watch it tomorrow. Happy the Cinerama series was released on Blu-ray and have all of them on my shelf.

[sigh] If only we could get The Wonderful World of the Brothers Grimm. Then, we'd have them all.

Only Chicago's McVickers' Cinerama Theatre showed this in 3-panel Cinerama. 70mm prints were shown at all other Cinerama theatres.

RolandL said:
Only Chicago's McVickers' Cinerama Theatre showed this in 3-panel Cinerama. 70mm prints were shown at all other Cinerama theatres.
Click to expand...

Yes, that's made abundantly clear in the bonus features with the producer's sons. This, obviously, comes from the three panel masters.
Last edited: Dec 21, 2016
You must log in or register to reply here. 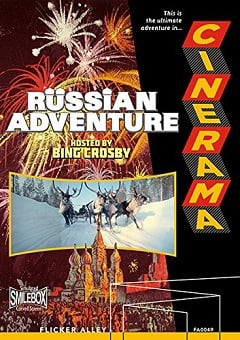