The last feature to star Janet Gaynor and Charles Farrell together, Change of Heart may be a product of its era with its concentration on the personal rather than the professional lives of its protagonists, but it nevertheless succeeds in being more than moderately entertaining.

During the first half dozen years of the talkies, the preeminent screen couple was Fox’s Janet Gaynor and Charles Farrrell. Their playing together was so natural and effortless that it provided a blueprint for subsequent teamings at Fox and at other studios. The duo’s last film together was John G. Blystone’s Change of Heart, a 1934 melodrama that may have lacked freshness and insight into the efforts of young college graduates trying to make it in the big city, but it boasted a fine roster of leading actors and continues to entertain in spite of its hoary old clichés about unrequited love and scheming vixens out to win the love of a married man.

Graduating from an unnamed West Coast university, four college friends are eager to try their luck looking for careers in New York City: writer Catherine Furness (Janet Gaynor), lawyer Chris Thring (Charles Farrell), actress Madge Rountree (Ginger Rogers), and radio crooner Mack McGowan (James Dunn). Their personal lives are intertwined, too, in a rectangle of unrequited love: Catherine loves Chris who loves Madge who loves Mack who loves Catherine. Though they pledge faithfulness to each other, once in the Big Apple, Madge ditches the gang and chases fame through connections with society’s upper echelon while Catherine can’t find writing work and instead goes to assist the proprietor (Beryl Mercer) of a salvage shop. Chris and Mack find work in their chosen professions, but their unsuccessful pursuit of love tends to quash any satisfaction they might have gotten through their jobs.

The Sonya Levien-James Gleason (who has a cameo as a hot dog vendor at Coney Island) screenplay forsakes potentially interesting looks at each of the four main characters’ attempts to find work in the big, cold city and concentrates instead on their not-always-interesting pining for one another away from work. Though naturally the viewer wishes to see Gaynor and Farrell’s characters end up with each other (because they do have amazingly strong screen chemistry), they’re apart for longer during the movie than they’re together, and it’s so clear they belong together that the separation begins to feel more and more contrived the longer it lasts. Once they become a couple (she nurses him back from near death when everyone else has abandoned him), the writers and director John Blystone give us two particularly memorable moments between the two: Catherine shaves Chris after his partial recovery as they talk of their future together, and the pair lug furniture through the New York streets to their shabby new apartment. We never are allowed to see Madge make it on Broadway (after a long absence, she suddenly returns as a success with lots of money), and we only hear a couple of snatches of James Dunn’s singing (not his strong suit) to know he has landed a radio job.

Three of the four leading actors already had or would eventually earn Academy Awards (Charles Farrell was never nominated), and all of them are given more than adequate moments to show their stuff: Ginger Rogers in particular stands out as an especially selfish, unpleasant, and unlikable character (she makes winning Chris away from Catherine into a contest, and director Blystone cuts back and forth near the end of the film between temptress Madge and sweet Catherine to prolong our finding out how the fight for Chris’ love turns out). Both Janet Gaynor and James Dunn show their basically sunny dispositions to great advantage as we root long and hard for their eventual successes. Charles Farrell gets stuck as the sad sack of the bunch: quiet, introspective, and guilty of wearing his heart on his sleeve, a sweet but basically introspective performance. Beryl Mercer gives a lovely performance as the woman who first offers Catherine a helping hand, and Gustav von Seyffertitz is most welcome as a kindly doctor. Look fast for Dick Foran as the radio crooner whose job Mack wants and Shirley Temple in a wordless cameo as a child passenger on the fifteen-hour airplane flight between the coasts. 1934 was Shirley’s breakthrough year in films, but this definitely wasn’t the movie that first got her noticed.

The film’s original 1.33:1 theatrical aspect ratio is presented here. At its best, the image offers better than average sharpness and a grayscale that features deep blacks and  creamy whites. But this over eighty-year old film does display its age: there are shots which aren’t particularly crisply focused, plenty of dust specks, some damage here and there, reel change markers scattered throughout, and some missing frames. The film has been divided into chapters every ten minutes so this disc has 8 chapters.

The volume level has been set damagingly high and needs quick adjustment to prevent distortion or possible injury to your speakers. Dialogue is always easy to understand and has been mixed with the sparse scoring of the era and the atmospheric effects necessary to convince studio soundstages as being the streets of New York. For a film of this age, hiss has been kept remarkably in check, but there are occasional thumps and pops on the track and some crackle here and there, too.

The last feature to star Janet Gaynor and Charles Farrell together, Change of Heart may be a product of its era with its concentration on the personal rather than the professional lives of its protagonists, but it nevertheless succeeds in being more than moderately entertaining. The made-on-demand disc shows its age with no studio clean-up at all, but it’s still watchable and for fans of the stars still something to see. 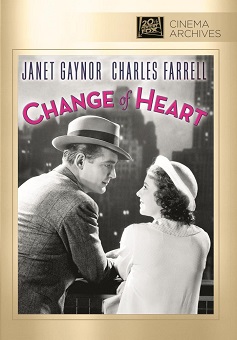