As Dogs & Cats 3: Paws Unite! opens, dogs and cats have formed not only a truce but have formed a peace-keeping organization known as Furry Animals Rivalry Termination (F.A.R.T.) to stop any cat or dog attempting to upset the balance. The three analysts heading up the Seattle (aka Vancouver) office are Senior Agent Ed (Garry Chalk) – a golden retriever, Agent Roger (Max Greenfield) – a sheepdog, and Agent Gwen (Melissa Rauch), an orange tabby. The three are completely unaware that Pablo (George Lopez), a cockatoo that has been ignored at the local pet shop for several years, has formed a counter-agency – Pets of the Out of the Ordinary Pedigree (P.O.O.P.), planning to pit dogs and cats against each other, forcing humans to give up the top two pet animals in the world and replace them with birds, lizards, and rodents. That’s right, for this third entry, it’s FART vs. POOP and is pretty much the level of the jokes here, well-deserving its PG rating for Rude Humor. There are also tired running gags of cat naps, “Fish don’t count,” and seamlessly unending pet puns. Cats & Dogs 3 also contains a subplot where Gwen’s owner Zoe (Sarah Giles) and her musician father (John Murphy) are being evicted and their upstairs’ neighbor, Roger’s owner Max (Callum Seagrum Airlie), is an over-achieving and over-extended tennis player at the local school. Max and Zoe don’t get along until Roger and Gwen lock them in the elevator to become friends. The visual effects are light years behind current CGI technology, with the animals’ mouth movements that just aren’t convincing.

Cats & Dogs 3 was produced as a direct-to-video release, and it shows, badly. Many wide shots are overly soft, with details often appearing smeared (check out Max’s sweatsuit at the 45:00 mark). Colors are decent, almost muted to some degree when you would expect them to be much more vivid. Contrast is weak, with blacks that appear more dark grey than anything approaching black.

Although a DTS-HD MA 5.1 track is listed and that is what my Denon receiver indicates being decoded, Cats & Dogs 3 is a very front-heavy presentation with some occasional discrete surround effects, but it may as well be a 2.0 matrixed surround mix, as they are so infrequent. LFE presence is barely there, not anemic, but just not all that noticeable, at least until the hip-hop song during the end credits. Dialogue is clear and understandable throughout, mostly directed from the center speaker.

Kids may enjoy Cats & Dogs 3: Paws Unite! much more than adults will.

2.5 stars for that movie is at least 2 stars too many!
Reactions: Todd Erwin

This does not sound like "an entry that cat-lovers may enjoy over its predecessors" (even as low as that bar might be).

It sounds more like something that should be buried in the litterbox!

Sad that Warner went the cheap and stupid route for this, as the first two films were kind of fun.

Thomas Newton said:
This does not sound like "an entry that cat-lovers may enjoy over its predecessors" (even as low as that bar might be).
Click to expand...

The villain in this entry was not a cat - that was my rationale for that statement.

P.S. – If you want videos that your kids can really enjoy – and, for some reason, you want them to be centered around animals – try these:
Really, who needs to settle for P.O.O.P. versus F.A.R.T. when there is all of this other stuff so readily available? 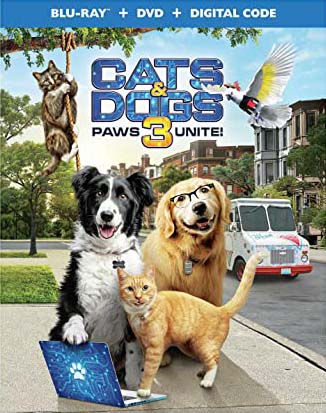