After a series of award-winning television specials and an off-Broadway musical that ran for years, Charlie Brown and his Peanuts gang finally came to the big screen in A Boy Named Charlie Brown.

After a series of award-winning television specials and an off-Broadway musical that ran for years, Charlie Brown and his Peanuts gang finally came to the big screen in A Boy Named Charlie Brown. For Peanuts aficionados, the familiar tropes of Charles Schulz’s moppet world translated just fine from one medium to another, and this first feature also offers a complementary song score by Rod McKuen that sometimes works with but just as often works against the more familiar jazz riffs of Vince Guaraldi which by the time of this movie had become synonymous with the sound of Peanuts.

Charlie Brown (Peter Robbins) finds himself once against in the doldrums as he endures for the umpteenth time a series of disasters: a catastrophic failure flying his kite, losing the season’s first baseball game, having the football once again pulled away by the calculating Lucy Van Pelt (Pamelyn Ferdin) who as Charlie’s psychoanalyst never tires of pointing out his flaws, even resorting to a slide show and later an instant replay of his inability to succeed at anything. But when the school spelling bee is announced, Charlie is determined to learn the dictionary if he has to in order to finally accomplish something positive.

Charles Schulz had based his script on situations which had delighted his readers for a couple of decades at the time of the film’s production. Charlie’s utter depression over the course of the film gets to be a bit heavy going as the film plays out only made bearable by Charlie’s unexpected success at spelling – though he manages to make even his triumph something of a burden before it’s over – and by the usual side trips to Snoopyland (as he dogfights in his Sopwith Camel and both figure skates and plays hockey at the Rockefeller Center ice rink), Schroder’s (Andy Pforsich) Beethoven “Pathétique Sonata” interlude, and Linus’ (Glenn Gilger) dizzying search for his missing blanket. Having a wider palette of the big screen for his imagery, director Bill Melendez uses split screens on occasion to expand views of Peanuts life, takes a mosaic motif to add color to the crushing baseball ignominy, and allows the animators to take some unusual flights of fantasy in several other sequences. Perhaps the most successfully imaginative illustrates the song “I Before E” as Charlie prepares for the school spelling bee, but Snoopy’s several adventures all get the extra bonus of a feature film budget in which to make his exploits even more memorable. Many of the Vince Guaraldi themes used on the television specials also show up in this film, some with tempo and minor key alterations, but their sophistication sometimes seems at odds with Rod McKuen’s song score which is far more traditional in composition. The title song does carry a bit of poignancy to match Charlie’s usual depression (though the lyrics sometimes seem a bit forced), but “Failure Face” chortled by the girls and “Champion Charlie Brown” sung by the kids after Charlie wins the school bee and heads to New York City for the national championship seem more attuned to another movie (and none of them match the clever effortlessness of Clark Gessner’s score for the stage musical). Nevertheless, the song score did earn the picture’s sole Oscar nomination.

Peter Robbins had voiced Charlie Brown on some of the television specials, so his fine work continues right in line with his earlier efforts. Pamelyn Ferdin, on the other hand, doesn’t quite have the authority and superiority to make Lucy such a dominant character in the story, and Glenn Gilger is just okay as Linus though he had done the character on one of the prior specials. Erin Sullivan is a delightful Sally Brown and Christopher DeFaria does a fine Pig Pen (though he also excelled as Peppermint Patty in some specials and the next feature Snoopy Come Home).

Would it have killed CBS to properly matte this feature film in widescreen format? Instead, we’re given a 1.33:1 open matte transfer (1080p resolution, AVC codec) that doesn’t look to have been touched since its VHS days. Imagery can be sharp, but there are infrequent soft shots that seem to come from nowhere. Color is very strong and is probably the transfer’s biggest claim to fame. There is also no banding noticeable. Certainly there’s been no clean-up or remastering as there are small white scratches in certain places, the usual dirt and some dust specks, and spotting to break the spell of the storytelling. The movie has been divided into 12 chapters.

The disc offers DTS-HD Master Audio 5.1 and Dolby Digital 2.0 stereo sound choices. The surround track gets a nice spread across the front soundstage, but music only occasionally visits the rear channels. Though not lossless, the 2.0 track is probably the more balanced mix. Dialogue is solidly presented throughout, and the music and occasional sound effects are mixed with professional surety. There are no age-related problems to contend with.

There are no bonus features with the disc.

It’s nice to have A Boy Named Charlie Brown on Blu-ray disc, but the transfer is a great disappointment for those who wanted the movie to have a feature film look and have at least a modicum of attention paid to its cleanliness and overall presentation. 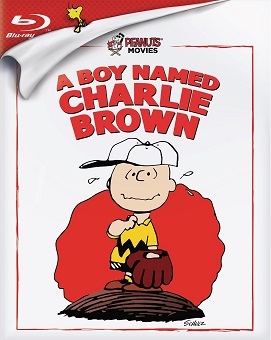