Grandly quirky and entertaining mix of comedy and procedural 4 Stars

Based on the 2011 film thriller, CBS’ Limitless took some of the basic tropes from the movie and developed them into one of network television’s quirkiest and most appealing new series.

Based on the 2011 film thriller, CBS’ Limitless took some of the basic tropes from the movie and developed them into one of network television’s quirkiest and most appealing new series. Sad to say, the show was possibly too unique and individualistic for its own good, losing part of its audience along the way and ending with a cancellation at the end of its premiere season. It’s a shame, too, because Limitless was probably the most creative of the procedurals this year to air on a network whose major claim to fame is procedurals. Without even trying it in an earlier time slot or on a different night, CBS ended what promised to be one of television’s most eccentrically entertaining shows before it had a chance to really fully flower.

With a new mind enhancing drug NZT-48 on the street, people are dying due to its severe side effects after the drug has worn off. Happy-go-lucky Brian Finch (Jake McDorman) is one of the people who have experienced the miraculous brain-expanding benefits of NZT, and when the ambitious Senator Edward Morra (Bradley Cooper) gives Brian a shot that counteracts the damaging side effects of the drug, the FBI is fooled into thinking that somehow Brian Finch is immune to the aftereffects of the pill. Hired as a consultant to assist with cases while the FBI scientists study what gives Brian his unique invulnerability to the drug, the good-hearted but undisciplined Brian clashes with boss Nasreen Pouran (Mary Elizabeth Mastrantonio) right away. Charged with being his handler is Special Agent Rebecca Harris (Jennifer Carpenter) who has great patience with Brian’s mischievous nature, and while other agents like Spellman Boyle (Hill Harper) and Brian’s bodyguards whom he nicknames Mike (Michael James Shaw) and Ike (Tom Degnan) resent his special treatment, Brian does produce incredible results for the FBI.

With Brian facing various cases of the week, the series is able to flex its procedural muscles away from formula with Brian’s unusual approaches to crime solving. He’s an arts and crafts guy, so many of his explanations for crimes and their solutions become incredibly charming and funny arts projects that vary from case to case. Brian’s imagination both on and off NZT plunges the viewer into various fantasias that likewise remove the show from the realms of the average procedural. One episode may revolve around a kiddie show motif; another is a paean to Ferris Bueller’s Day Off. There are telenovela parodies, 007 nods, comic book scenarios, and superhero movie formats. There’s even a pirate episode. NZT takes Brian to some amusing and entertaining places, and yet, as the season runs, crimes of the week begin to take a backseat to an insidious subplot involving Senator Morra’s right-hand man Jarrod Sands (Colin Salmon) who even early-on represented a dangerous presence to Brian, but when he goes rogue to form his own operation, the final four or five episodes take on more of a crime thriller feel than a whodunit.

The other overriding subplot of the season involves Brian’s slavish (and occasionally irritating) devotion to his sometimes smothering, manipulative family. His lawyer father Dennis (Ron Rifkin) almost dies in the pilot, saved due to Brian’s expanded knowledge about medicine once he takes NZT and a liver transplant donor arranged by Senator Morra once Brian signs on to work on Morra’s behalf with the FBI. But the father is convinced Brian is becoming a drug addict taking NZT every day to aid the FBI in solving cases, and he continually harangues Brian and the Bureau about his well-being not trusting Brian to be able to make adult decisions even though he is an adult doing good work and helping a great many innocent victims. Jake McDorman as Brian leads a very strong cast of actors in these often playful roles (since in Brian’s fantasies, many of his fellow cast mates must dress and act contrary to their established characters). Jennifer Carpenter goes the extra mile to keep Brian legit (though she often fails as he’s definitely someone who forges his own path). Georgina Haig shows up midway through the season as love interest Piper Baird, a scientist who may be able to create the serum herself to release Brian from NZT side effects and thus free him from Senator Morra’s control. Colin Salmon makes a great season-long villain, and Tom Degnan and Michael James Shaw are great fun all season long as Brian’s reluctant bodyguards who inevitably grow close to the ultimate trickster.

Here are the twenty-two episodes contained on six DVDs in this season one set:

3 – The Legend of Marco Ramos

6 – Side Effects May Include…

12 – The Assassination of Eddie Morra

The show’s widescreen aspect ratio of 1.78:1 is faithfully reproduced in these transfers which are anamorphically enhanced for widescreen televisions. Sharpness isn’t always razor-edged: as the effects of NZT kick in, the screen often color times a bit warmer and a little softer. Color varies between a bit undersaturated to a bit oversaturated at given moments, and black levels, usually deep, can get a little cloudy, too. All of these variations are part of the look of the show, but it sometimes creates problems with these standard definition transfers. There are also fairly frequent moiré patterns and aliasing on view. Each episode has been divided into 6 chapters.

The disc offers Dolby Digital 2.0 stereo and 5.1 surround sound options. The 5.1 track is very good indeed, the equivalent of the broadcast version with dialogue firmly rooted in the center channel and music by Paul Leonard-Morgan and split atmospheric effects nicely designed and placed within the entire soundstage.

Audio Commentary: series creator Craig Sweeny and actor Hill Harper share the track for “Headquarters!” and have a lot of fun discussing the quirks of the show which was filmed in Toronto. Clearly from the comments, the cancellation decision had not been made when the track was recorded, sad in retrospect as each man speaks of hopes and ambitions for season two.

Big Screen to Small Screen (17:32): creative talent before and behind the camera discuss the adaptation of the film Limitless to the needs of a weekly television show. Among those speaking about the similarities and differences are producers Craig Sweeny, Bradley Cooper, Alex Kurtzman, Marc Webb (who also directed the pilot), and Heather Kadin and actors Jake McDorman, Jennifer Carpenter, Hill Harper, Blair Brown (Brian’s mother on the show), Colin Salmon, Georgina Haig, and Ron Rifkin.

The Style of Limitless (12:20): producer Craig Sweeny, star Jake McDorman, director Marc Webb, and production designer Bob Shaw discuss the unusual nature of plot presentation in the series and talk about some of their favorite weird episodes of the season.

More of Who You Are (9:33): a brief discussion of how Brian’s steady moral compass whether on NZT or not is the nature of the talk here featuring stars Jake McDorman, Blair Brown, Georgina Haig, and Hill Harper and creator Craig Sweeny.

Brian Presents (7:26): a brief rundown of the various arts and crafts projects Brian concocts during the season, all thanks to production designer Bob Shaw and his art department.

One of the true casualties of the 2015-2016 season, CBS’ Limitless was a show which had only begun to scratch the surface of its creativity. No other network or cable outlet was interested in picking up this uniquely funny and exciting series once the cancellation ax had fallen: more’s the pity for loyal viewers who quickly took the show to its collective hearts. Recommended even in standard definition format. 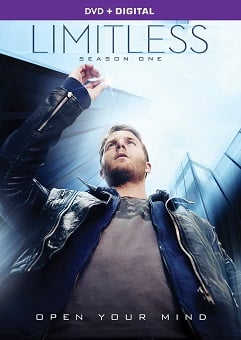