Forum List What's new Dark Style Change width
Log in Register
What's new Search
Menu
Log in
Register
Navigation
Install the app
More options
Dark Style
Close Menu
Posted on August 30, 2016 by Matt Hough
You are using an out of date browser. It may not display this or other websites correctly.
You should upgrade or use an alternative browser.
Effectively scary vampire series forges its own path. 3.5 Stars

Going by the various hit TV series which dot the television landscape, America is in terrible danger of apocalypse from all sorts of other-worldly creatures, and the unusual vampires at the center of FX’s The Strain are certainly among the scariest and most lethal.

Going by the various hit TV series which dot the television landscape, America is in terrible danger of apocalypse from all sorts of other-worldly creatures, and the unusual vampires at the center of FX’s The Strain are certainly among the scariest and most lethal. In its second season, the horror-tinged drama series continues toward the takeover of Manhattan by the Strigoi, an ancient alien presence which uses human greed and self-involvement in which to insidiously infiltrate mankind to eventually take over the world with its Master controlling their every thought and feeling.

As we pick up in season two, elderly hunter Abraham Setrakian (David Bradley) had drawn the Master (Robert Maillet, voice by Robin Atkin Downes) out into the open and exposed him to sunlight, injuring him to such an extent that he must choose a new human vessel for his essence. Chosen is former rock idol Gabriel Bolivar (Jack Kesy) though the heavy lifting in the day-to-day takeover of the island is left to the Master’s right-hand man Thomas Eichorst (Richard Sammel). Still searching for some way to wipe out the Strigoi are CDC scientists Ephraim Goodweather (Corey Stoll) and Nora Martinez (Mía Maestro) who hit on the idea of insinuating into the Strigoi population a virus which will wipe them out, but the duo needs help if their bioweapon is to be manufactured on a grand sale. In the meantime, however, Eph’s son Zach (now played by Max Charles) is still angry and belligerent over his mother Kelly (Natalie Brown) becoming one of the vampires and is certain that there will be a way found to cure her. The Master recognizes the threat from Eph and Nora’s discovery, so he sends Kelly back to try to distract the scientists from their studies by having her make continual attempts to kidnap Zach.

The Master’s plan to take over the world hinges on having access to worldwide exposure which ailing billionaire Eldritch Palmer (Jonathan Hyde) can offer him in exchange for a return to health. With vitality restored Palmer for the first time as an adult begins to enjoy pleasures the world can afford to a well man, one of which is love which comes to him for the first time in the person of his secretary Coco Marchand (Lizzie Brochere). In fact, a good portion of the season explores love relationships between many of the principal characters: Eph and Nora, of course, and their buddy in extermination Vasiliy Fet (Kevin Durand) who begins an on again-off again love affair with bisexual hacker Dutch Velders (Ruta Gedmintas). Toward the end of the season, focus from the impending vampire apocalypse seems to get sidetracked a bit by these excursions into the land of somewhat hopeless romance (two of the season’s three love stories do not end happily while the third is still in limbo). Also there is a great deal of time spent with Setrakian’s efforts to locate and obtain the Occido Lumen, an ancient text which carries secrets about the Strigoi within its covers. Coming to his aid is another extraterrestrial, Mr. Quinlan (Rupert Penry-Jones), one of the ancients who appear to be at complete odds with the Master and his minions.

One of the most effective aspects of the season is the reliance on flashbacks to give us valuable background on the early lives of some of the show’s most important characters. Especially illuminating are scenes with earlier incarnations of Abraham Setrakian, Eph Goodweather, and especially Thomas Eichorst whose experiences in pre-Nazi Germany and later as a ranking member of the party offer a clear understanding to the command he now displays as the Master’s “sergeant-at-arms.” It also allows us to see the multi-faceted acting talent of Richard Sammel as visual effects peel away the years from his face and we see a young man not especially gifted at anything but in love with a pretty office secretary and how his feelings of inadequacy lead him to make decisions that will have lifelong consequences for him. Corey Stoll gets to ditch the widely criticized hairpiece midway through the season as Eph changes his look after he becomes a wanted fugitive. His charisma and presence, however, are still wonderfully on display even if the writers most resort to giving him the patience of Job to withstand the explosive continual brattiness of Max Charles’ Zach, rebellion that seems foolish in the face of what he has seen going on around him. Also giving wonderful performances this season are Mía Maestro as the understanding and sensitive Nora, Ruta Gedmintas as the sexually conflicted Dutch, Rupert Penry-Jones as the enigmatic Quinlan, and Samantha Mathis as a borough president who comes to the forefront of the fight against the Strigoi.

Here are the thirteen episodes contained on three discs in this second season set:

9 – The Battle for Red Hook

The series is framed in its widescreen television aspect ratio of 1.78:1 and is presented in 1080p resolution using the AVC codec. Sharpness is superb (even with all of the CG work which is necessary for the “vampire” special effects to work; the one exception is the softly stylized view of the Roman Coliseum with Quinlan as the champion gladiator in a flashback), and color is rich and deep with accurate skin tones. Contrast is consistently maintained, and black levels are awe-inspiring, necessary for a series where nighttime visuals and scenes shot in dark spaces are plentiful. Each episode has been divided into 12 chapters.

All of the episodes have a DTS-HD Master Audio 5.1 sound mix, superior to broadcast quality and among the best available soundtracks for a television series on home video. While episodes don’t always contain a full array of surround elements (more front effects and less attention to the rear channels), what’s provided is fine indeed with dialogue easy to understand and placed in the center channel and Ramin Djawadi’s unusually suspenseful score getting nice spread throughout the soundstage.

Audio Commentary: showrunner/executive producer/writer Carlton Cuse provides it for the season finale “Night Train.” While a decent amount of backstory and production information is provided by Cuse, his habit of punctuating his comments with “you know” every few words really gets irritating after a few hundred repetitions.

Deleted Scenes (13:33, HD): eleven scenes in total are shown in montage form across the three discs.

Meet the Crew of The Strain (7:31, HD): a jokey supplement with the star actors of the show portraying various crew members denigrating the egotistical stars of the production.

The White Room (3:54, HD): actor Richard Sammel gives us a tour of this most unusual set used in one of the key suspense scenes late in the season.

Sentient Strigoi (7:08, HD): actors Kevin Durand, Ruta Gedmintas, Corey Stoll, Richard Sammel, Miguel Gomez, Rupert Penry-Jones, Jonathan Hyde, and Natalie Brown discuss the construction of the Strigoi vampires which gives them a certain kind of reality and the strata that exists within their own society.

Filled with horror and suspense and some surprising turns, season two of The Strain continues to convince that a vampire plague is upon us. The Blu-ray box set offers terrific video and audio quality, quality that fans of the show who want to revisit each terrifying moment will greatly appreciate.

Yesterday at 5:50 AM
Museum Pieces 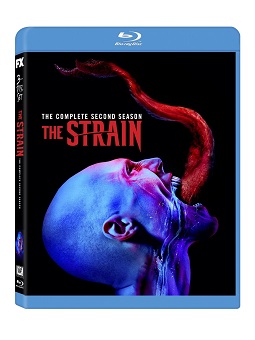