Forum List What's new Dark Style Change width
Log in Register
What's new Search
Menu
Log in
Register
Navigation
Install the app
More options
Dark Style
Close Menu
Posted on April 5, 2020 by Sam Posten
You are using an out of date browser. It may not display this or other websites correctly.
You should upgrade or use an alternative browser.
Someone has to speak up. Someone has to get mad. 3 Stars 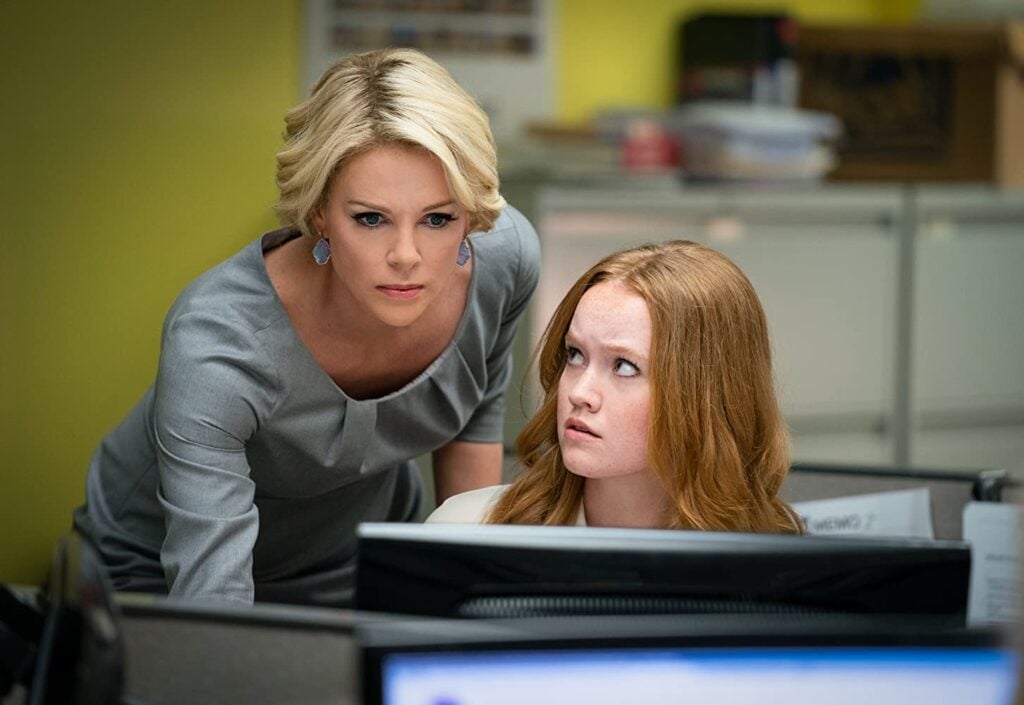 After Fox TV news personality Gretchen Carlson (Nicole Kidman) is pulled from the air and after her own disastrous turn in the national spotlight triggered by fighting with Republican candidate Donald Trump, Anchor woman Megyn Kelly (Charlize Theron) begins to hit her own glass ceiling with boss and abuser Roger Ailes (John Lithgow). Ailes is a serial abuser but his position and the lockstep silence about internal issues the Fox environment insists on have hidden his misdeeds for decades. But Carlson and Kelly start digging, one as part of a lawsuit and the other as self protection, and they start to find women who will talk. Among them is Kayla Pospisil (Margot Robbie), a psuedonimous amalgamation of real people, who is currently being abused by Ailes in trade for a potential rise in status and on air time. When the news breaks of the lawsuit against Ailes, it turns out to be the real bombshell, and the women have the receipts to prove their allegations, bringing down the largest force in American news and politics. 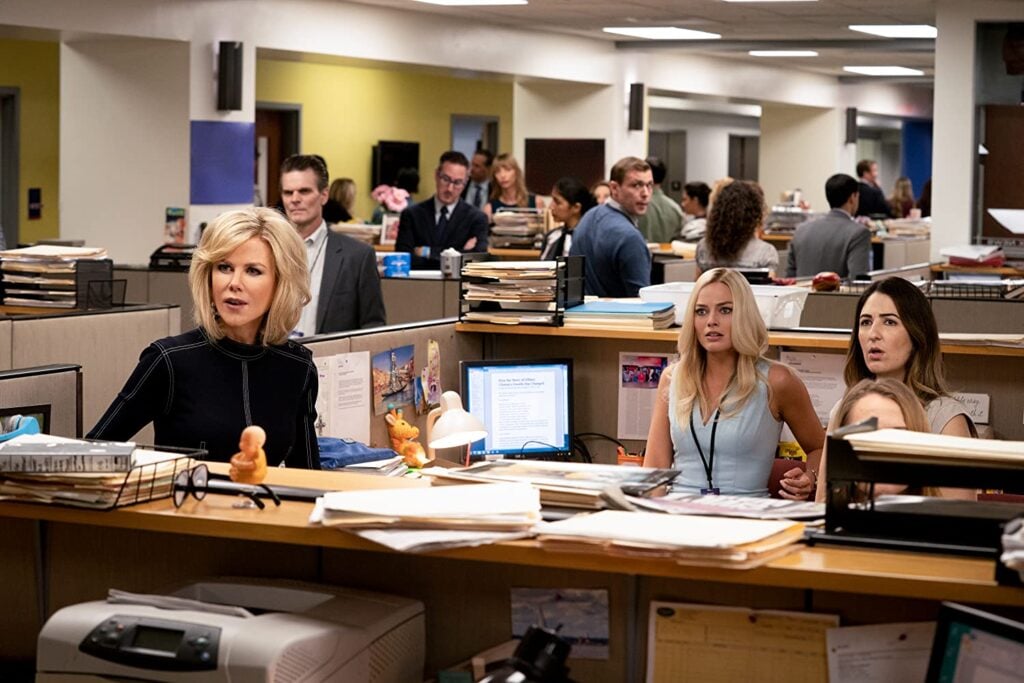 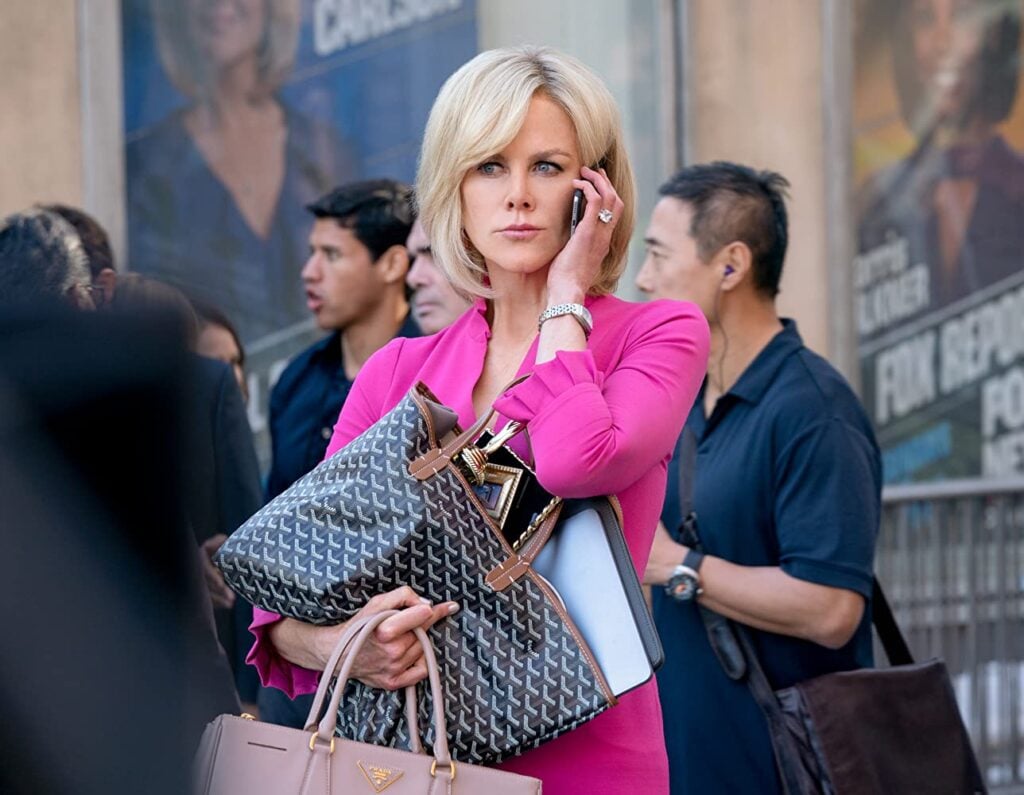 It’s difficult to discuss the premise of Bombshell within the confines of HTF’s well advised prohibition against politics and religion but there are a few things we can agree on. First, Roger Ailes was both one of the most politically connected and feared news producers in the US. He was also accused by dozens of women of degrading comments, lewd suggestions, physical and mental abuse and more. His network aided and abetted that behavior despite it’s outward appearance to give highly visible anchor slots to very stylish right wing women. Regardless of where you fall on the political spectrum his actions are abhorrent and the network and the world are better because he was removed.

Second, despite being produced by ostensibly liberal movie producers, directors and actors, Fox was portrayed mostly in neutral to positive light. There are myriad ways that they could have thrown Fox further under the bus. Yes, there are some digs, particularly:
Roger Ailes: News is like a ship. You take your hands off the wheel and it pulls hard to the left.

Jess Carr: Also stop worrying if the story’s legit. And if you can’t source it, just go with, “Some are saying.”

Jess Carr: You have to adopt the mentality of an Irish street cop. The world is a bad place. People are lazy morons. Minorities are criminals. Sex is sick but interesting. Ask yourself, “What would scare my grandmother, or pi** off my grandfather?” And that’s a Fox story. Are you writing this down?
Kayla Pospisil: Oh, it makes so much sense.
Jess Carr: Frighten, titillate.

In the grand scheme of things they treated Fox pretty well.

Third, the movie doesn’t have much punch. Sure Ailes goes down and the 3 female leads put in award worthy performances. But nothing changed. Fox, if anything, is worse today from a facts standpoint. Ailes is dead from a tragic fall. And the ‘zinger’ to the film was that Carlson had tapes of Ailes bad behavior, which is the only thing that gets results today. It’s all a bit ‘so what?’ for me.

Picture quality is fine. The ‘look’ of the film can veer from hyper real news style to ‘behind the scenes’ film look, but it is what it is. It’s clean, no artifacts, and it’s bright and bubbly.

Overall the film is center heavy as befits a mostly talky film. However the thing that elevates it a bit is the terrific use of sound. First was the inspired use of Billy Eilish’s “Bad Guy” in the trailer, followed up by Regina Spektor’s Little Soldiers theme song. But the most amazing part is the Elevator Scene, which has become almost a meme of it’s own, backed by the “Elevator Trio” song. The Ha’s it uses just give chills. It’s even better in the film than listening to it just on youtube.

I went through the full seven part extra segment and found it both insightful and enjoyable. 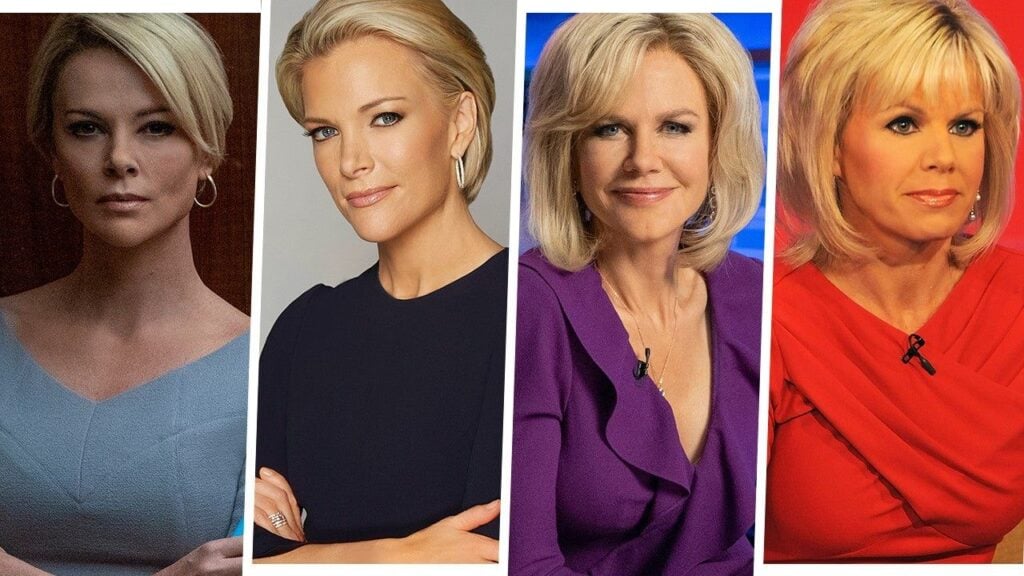 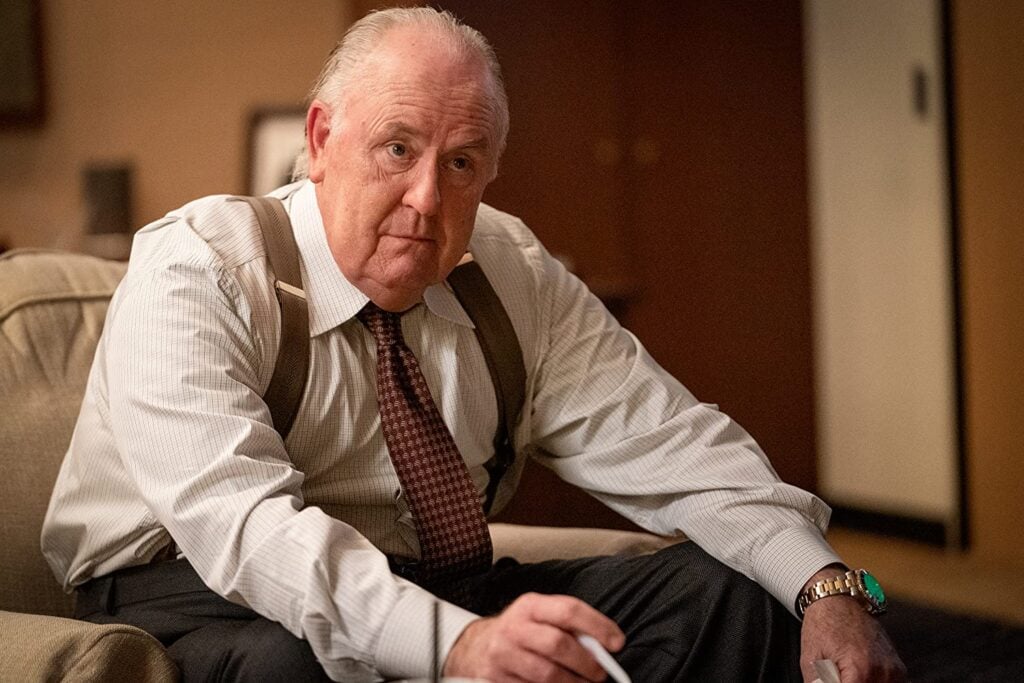 Overall I’m struck by the awesome performances of the three leads. Charlize Theron was absolutely steely as Kelly and she was a force in this movie, despite the vast majority of the work being done to actually take down Ailes resting on Carlson’s shoulders. Kidman’s best scene for me was confronting a viewer who voiced what a lot of people think: Fox is making America worse and weaker. What can Carlson actually say to that? Be nice to me I’m just doing my job? Give us all a break. And Robbie’s performance is just terrifying. What would any of us do when confronted with the choices she faced? Who would believe us? Is it worth the abuse to get ahead?

Lithgow is likewise a hero for being able to perform the role of Ailes, with both an anything to win damn the truth attitude and his horrible abuses come to life.

There’s literally a whos who of supporting cast that are great too. Rob Delaney as a producer stuck between supporting his friends and the company. Kate McKinnon as a closeted gay democrat working at fox. Allison Janney as a take no crap lawyer. Malcolm McDowell and Rupert Murdoch. Connie Britton as Ailes’ wife. Great performances all around.

But in the end? It didn’t really resonate with me. There was nothing here I could take as joy or lesson. The network still is what it is. Maybe worse. Ailes was stopped but the network still goes on.

I haven't seen this film and I doubt I would watch it repeatedly, but your review had made me want to see it at least once.

Robin9 said:
I haven't seen this film and I doubt I would watch it repeatedly, but your review had made me want to see it at least once.
Click to expand...

Awesome, that's the best any of us can ask for!

Thank you for the excellent review, Sam. While the film covers some of the same territory as The Loudest Voice on television I found the film fascinating. Great performances, writing and direction. I hope that the film finds a wide audience as it has an important story to tell for this and future generations.

This review makes no sense- first you state “the network and the world are better because he was removed.” Then at the end you state “The network still is what it is. Maybe worse.”
?????
M

noel aguirre said:
This review makes no sense- first you state “the network and the world are better because he was removed.” Then at the end you state “The network still is what it is. Maybe worse.”
?????
Click to expand...

Both are true statements.

I've been on the fence about watching this one, mainly because I find it good that Ailes was brought down but, yes, it is depressing where the network went from there. Probably best summed up in this quote:

Jess Carr: Also stop worrying if the story’s legit. And if you can’t source it, just go with, “Some are saying.”

As they have taken that to frightening new levels of fantasy and fiction on their shows.

You've pushed me off the fence now and I'll watch it. I do want to see the performances and Lithgow as Ailes. He's always wonderful in whatever he is in as well.

I watched Bombshell last night. The performances are the reason to watch the film as Theron does an often dead-on Megyn Kelly and at certain times looks stunningly like her. I did some double takes. Kidman and Robbie also give excellent performances, not as showy as what Theron does but they do a great job creating their characters and each woman, despite the fact they are all blondes in meeting a FOX news appearance requirement it seems, they each standout as a different personality.

While the film basically makes Kelly the center of the story she is not the hero here, that is actually Gretchen Carlson who was the person that nailed Ailes. The writer of the film in the special features identifies Robbie as the "heart" of the story and who the audience is mostly with as the tale plays out. Her character is actually fictional and made up by combining stories of several women. This both works and doesn't work. It does give the film a "heart" and someone you feel for but knowing she is a creation, even one based in facts from a group of woman, sort of hurts things.

Kelly is certainly no hero in the story. She is not particularly sympathetic and bides her time watching what others do before making any move herself. Theron is fun to watch but can't say I was impressed with Megyn Kelly.

Carlson is interesting, in that she has so much fight in her and is the driving force determined to take down the bad guy. She sticks to her guns and honestly she was the one I most liked and identified with. I wanted her to win whereas with Kelly she just was frustrating and did not seem too swift. Which was sort of how the real Kelly always came across anyway...so I guess true to life.

Robbie is great playing her sort of babe in the woods that is a bit lost and delusional, seemingly a requirement to work at FOX, and yes, you do feel for her but through most of the picture the character seems such a clueless dope that it seems no wonder that Ailes has his way with her. Speaking of Ailes, Lithgow is his usual awesome here playing an absolutely deplorable man but giving him something much more than just mustache twirling bad guy stuff. Ailes does have the ability to charm and some people did really like the guy...which is part of why he got away with what he did for so long.

This is a good story and the acting is great but the end product seems a bit mediocre. It has awards film written all over it. It does do some good work exposing FOX news as little more than a bunch of frauds duping their audience but really does not lean heavily into that. The point here is really how FOX had a corporate culture that demeaned women and that this came right from the top with Ailes.

In the hands of somebody like Sidney Lumet a story like this would really sizzle and probably be a classic. Here, it seems to just dutifully hit its marks and the three women throw themselves into their roles which basically carries the film.

Also should have mentioned that Kate McKinnon is excellent in this as well as a friend and lover of the Robbie character.

Not much interest in this one it seems. Maybe because people already knew how the story played out?

Reggie W said:
Not much interest in this one it seems. Maybe because people already knew how the story played out?
Click to expand...

I hate the subject matter so I thought it best to avoid the movie.
You must log in or register to reply here. 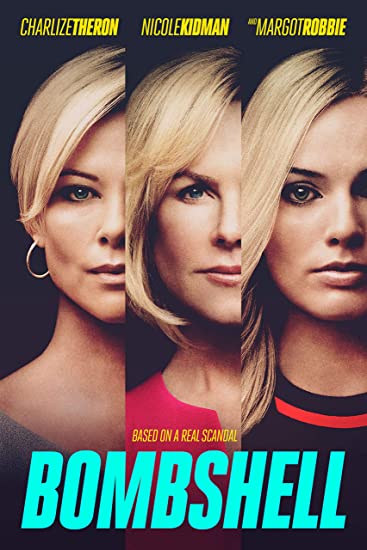