Sony’s UHD release of Black Hawk Down is a very worthy upgrade from the previous 2006 Blu-ray release, utilizing a new 4K scan and a Dolby Atmos remix.

In 1993 Somalia, the United States, under authorization from the United Nations, deploys three special operations forces consisting of Army Rangers, Delta Force operators, and SOAR Night Stalker helicopter teams on a peace keeping mission to protect UN and Red Cross aid workers and to prevent the genocide of Somali citizens by those loyal to Mohamed Farrah Aidid. On October 3, 1993, 100 US Army Rangers are dropped by helicopter inside the city of Mogadishu in an attempt to capture two of Aidid’s generals, but instead find themselves trapped and fighting for their lives after two Black Hawk helicopters are shot down by Aidid’s forces, and due to their location, won’t be rescued until early the next morning.

I am a bit embarrassed to admit this, but Black Hawk Down was one of the first Blu-ray titles I purchased back in 2006, and never watched this movie until now. By 2006 standards, I can see why many gave that transfer (which used MPEG-2 compression) high marks. Compared to Sony’s new UHD release, which was struck from a new 4K transfer of the original camera negative (per the studio’s press release), the difference is night and day. This new 2160p HEVC-encoded transfer with HDR10 high dynamic range is like rubbing sand out of your eyes. Black Hawk Down is a very grainy movie, and the original 2006 Blu-ray release (which is included in this package) did not resolve that grain very well, often appearing as distracting noise. Here, it is much more resolved (not scrubbed), appearing more organic and less obtrusive. Colors and contrast are better rendered as well, appearing more natural. Pay particular attention to the container the embalmer is using in the opening shot of the film. On the Blu-ray, the contents of the container are barely visible and bottom of the container almost appears to glow, yet on the UHD the contents are more distinct and the container is more uniform in color without glowing. Detail is excellent, with every grain of sand and bead of sweat visible, and the subtitles appearing almost 3-dimensional. This is what UHD is supposed to be.

The Dolby Atmos track is truly astonishing, adding emphasis to the action with a wide and immersive sound field allowing the viewer to hear public address announcements at the US base above you, gunshots from various discrete areas of the room, choppers flying overhead, the whirs of the propeller blades above your head during helicopter interiors, etc. LFE is very active, giving your subwoofer a good workout, although for those who may like to play movies with their subs extra loud may want to consider reducing their volume level at first. I should note that I did notice a few dropouts here and there, but only on the extended version, so I assume these may be due to seamless branching artifacts.

The UHD disc contains no special features whatsoever, but Sony has included the 2006 Blu-ray release of the theatrical cut plus a second disc of never-before-released archival features, documentaries, and news specials on a separate Blu-ray disc.

Question and Answer Forum: American Cinematheque (upscaled to 1080i; 11:43)

Black Hawk Down is yet another example of how great Sony treats its catalog on the UHD format. Highly Recommended. 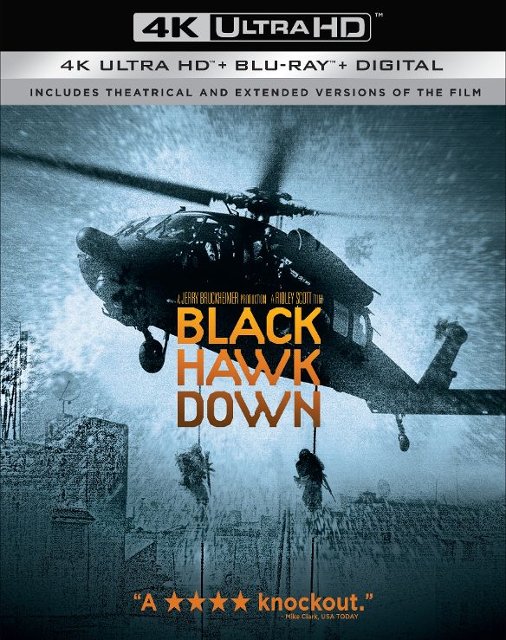