Posted on February 24, 2017 by Todd Erwin
An experiment that ultimately fails 3.5 Stars

Ang Lee’s experimental Billy Lynn’s Long Halftime Walk will likely be remembered more for it’s use of extreme high frame rate and 3D cinematography more than anything else. The story is not all that engaging, with the technology often removing the viewer rather than immersing them in the plot and lives of the characters. It’s an interesting experiment, but one that probably isn’t well-suited for the material.

When Billy Lyyn’s (Joe Alwyn) attempt to save Sgt. Virgil “Shroom” Breem (Vin Diesel) from a gunfight in Iraq is caught on camera, the video goes viral, with Billy and his platoon Bravo Squad whisked back to the States for a victory tour and to bury their comrade in arms, Shroom. Their tour culminates in their participation in a halftime show with Destiny’s Child during a professional football game on Thanksgiving Day (the movie hints that the team is the Dallas Cowboys, but never fully recognizes that fact), having been invited by team owner Norm Oglesby (Steve Martin), who rolls out the red carpet for them by including them in a pre-game press conference, catered lunch, and reserved seats. The squad is joined by film producer Albert Brown (Chris Tucker), who is trying to negotiate a movie deal based on the incident. While in country, Billy visits his family in Texas, including his speechless and wheelchair-bound father (Bruce McKinnon) who sent him off to war as part of a plea agreement to keep Billy out of jail, his mother (Deirdre Lovejoy) who worries he’s not eating enough, and his sister Kathryn (Kristen Stewart) who is still recovering from a major car accident that eventually and inadvertently caused Billy to destroy her ex-fiancee’s car. While at the stadium, during the pre-game press conference, Billy meets one of the team’s cheerleaders, Faison (Makenzie Leigh), who immediately takes a liking to Billy. The movie switches between the events listed above, often as flashbacks spurned by Billy’s PTSD, as he remembers the actual events of that fateful day in Iraq, while he struggles with life back home, the commercialization of war and patriotism, and the brotherhood of his squad.

Billy Lynn’s Long Halftime Walk is based on a novel by Ben Fountain that was known for its sharp satire. This movie adaptation, directed by Ang Lee and written by first timer Jean-Cristophe Castelli, plays the story straight with very brief glimpses of satire. As a straight-forward drama, the film often comes off as flat, and found myself not really caring about Billy, his family, or anyone on his squad. The real problem with the film is it too often felt (and looked) like a live drama for television, with actions that felt over-rehearsed and scripted. Ang Lee’s experimental use of 120 frame-rate 3D at 4k resolution compounds that issue with its striking but out of place clarity. Lee says he shot the movie in this ground-breaking format to give it more reality, but the pristine image gives away much of the film’s flaws and artificiality. The performances by its lead actors are very strong, especially newcomer Joe Alwyn as Billy, who is definitely troubled about his lost innocence during the event that he is being celebrated for. Garrett Hedlund is an actor that I haven’t been all that impressed with prior to this film. He was passable as Sam Flynn in TRON: Legacy, and completely miscast as the two-handed Hook in Pan (where I thought he came off doing a bad impersonation of Christian Slater), but here, as Sgt. Dime, Bravo Squad’s leader, he was very believable even though he was rather unlikable as a character. Kristen Stewart is another actress that never impressed me in the Twlight series, but as Billy’s sister, she emotes a great deal of love for her brother and guilt for him having to serve. Chris Tucker is unbelievably restrained as producer Albert Brown that most would not believe this is the same actor who got his start as Ruby Rhod in The Fifth Element and Carter in the Rush Hour movies, two of the most annoying characters of 1990s cinema. Steve Martin as team owner Oglesby is one of the weak links, and just isn’t convincing in the role (one of his best dramatic roles was in Lawrence Kasdan’s Grand Canyon, where he played a Joel Silver-type movie producer). Makenzie Leigh tries her best to read her lines and emote, but the role is so under-written that she comes off as nothing more than a pretty face. The rest of Bravo Squad are also under-written, essentially stereotypes of soldiers we’ve seen in hundreds of other films.

The real star of the film, though, is the technology. Ang Lee and cinematographer John Toll shot Billy Lynn at 120 frames per second in 3D at 4k resolution. Unfortunately, I was not a fan of the 48 fps used by Peter Jackson on The Hobbit, so much so that I saw the last film in the series in standard frame rate 3D. Having watched the movie twice in its entirety (once in 4K UHD at 60fps and a second time on 3D Blu-ray at 24 fps) and sampled the 2D Blu-ray, the movie works best as a whole, unfortunately, in 1080p 2D at 24 fps. It’s still not a good movie, but its flaws are not as blatantly obvious.

Billy Lynn’s Long Halftime Walk is the first movie to be released on the 4K UHD Blu-ray format in 2160p at 60 frames per second. As much as I disliked the movie and am not a fan of high frame rate cinematography, the disc does show off the true capabilities of a UHD display. Colors are vibrant and natural, with accurate flesh tones and excellent gradations of greens and browns in the camouflaged uniforms. But it is the detail that is off the charts on this disc, revealing pores and subtle muscle tones in the actors’ faces, even in medium shots. The textures of the AstroTurf in the stadium and the fabrics of the costumes and uniforms are also exceptional.

As Sony has often done with new releases that received a theatrical 3D release, a 3D Blu-ray version has been included in this set. Unfortunately, due to technical limitations of the format, the 3D version is presented at 24 frames per second. That’s not necessarily a bad thing, as the lower resolution and frame rate soften the image slightly, making the movie appear less hyper-realistic and more film like with more subdued colors. The 3D is used to provide more of a sense of depth, and does it exceptionally well, particularly when the soldiers walk out on to the field for an impromptu game of catch, but also during the press conference and the halftime show. There are maybe one or two instances of popout, the more memorable being during the impromptu tossing of footballs at the camera, and some of the extreme closeups have the appearance of just barely piercing the screen.

As with all of Sony’s UHD releases so far, Billy Lynn includes a Dolby Atmos soundtrack that contains a Dolby TrueHD 7.1 core. When compared to the DTS-HD Master Audio 5.1 track included on both the 2D and 3D Blu-ray discs played back on a 5.1 configuration with front heights and Pro-Logic IIz enabled, the Atmos track has a punchier low-end and much more immersive and active surrounds, more noticeably during the halftime show (a sonic treat) and the firefight in Iraq that utilize the heights, even in Pro-Logic IIz. Sounds and even dialogue are more precisely placed, with PA announcements seeming to come from above and actors speaking across the entire soundstage.

The bulk of the special features can be found on the 2D Blu-ray, with an exclusive feature on the UHD disc.

Technology As Art: Changing the Language of Cinema (2160p; 5:25): Director Ang Lee and Editor Tim Squyers discuss shooting Billy Lynn’s Long Halftime Walk in 3d at 120 frames per second. Although the featurette is in 2160p, it was completed at 24fps, so the clips do not show the benefits of high frame rate. This is exclusive on the UHD disc (although portions are included on the subsequent featurettes on the 2D Blu-ray).

Into Battle and Onto the Field: Stepping Inside “Billy Lynn’s Long Halftime Walk“ (1080p; 9:21): Director Ang Lee, Executive Producer Brian Bell, Director of Photography John Toll, Editor Tim Squyers, and members of the cast discuss making the movie and the challenges of shooting in a high frame rate.

Assembling a Cast (1080p; 11:29): A look at the casting process, including screen tests and interviews.

Recreating the Halftime Show (1080p; 6:27): A look at designing and shooting the main set piece of the film.

The Brotherhood of Combat (1080p; 4:24): A look at the bootcamp and preparations that cast members of Bravo Squad had to endure before making the movie.

Billy Long’s Long Halftime Walk is a difficult movie to recommend. One the one hand, it is a terrific demo disc to show off the full capabilities of your UHD display and UHD Blu-ray player. On the other hand, it’s not a very good movie, period. Hence, the mediocre overall rating. 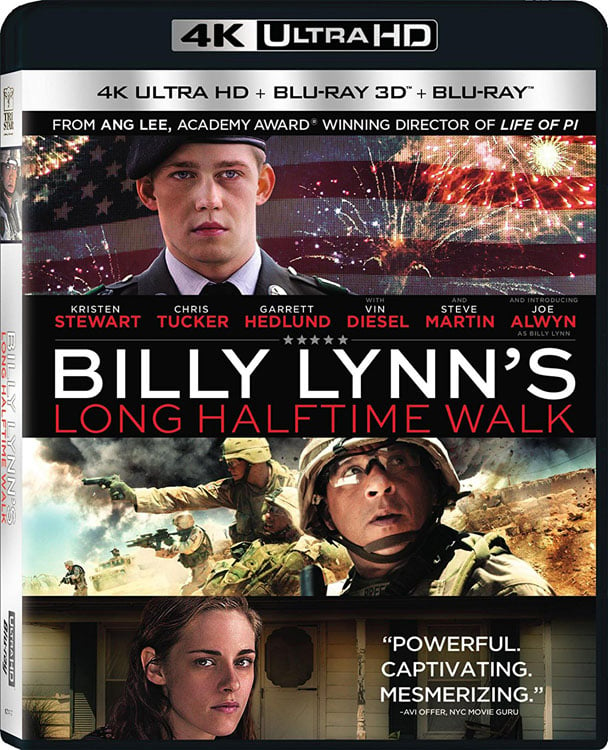