Posted on February 24, 2017 by Matt Hough
Unnecessary and uninspired sequel to the original cult hit 2.5 Stars

Was there really a crying need for a sequel to cult hit Bad Santa some thirteen years after the original film, especially one as forced and lame as Mark Waters’ Bad Santa 2?

Was there really a crying need for a sequel to cult hit Bad Santa some thirteen years after the original film, especially one as forced and lame as Mark Waters’ Bad Santa 2? Three members of the original cast return for a second go-round, and the movie is as profane and politically incorrect as the original, only in today’s more rancorous climate, the jokes mostly land with a thud and what was hilariously shocking more than a decade ago doesn’t even raise an eyebrow now.

Reprobate Willie Soke (Billy Bob Thornton) has come to the end of the line and decides to off himself rather than face another dull, disappointing day, but old friend-enemy Marcus Skidmore (Tony Cox) arrives with an anonymous gift of money and an offer for them to make a potential $2 million haul by robbing a Christmas charity organization Giving City located in Chicago right at the height of the holiday season. When Willie and Marcus arrive in Chi-town, the former is astonished to learn that the money and offer came from his nefarious mother Sunny (Kathy Bates) who had been scoping out the organization for months but needed her son’s expertise at cracking safes to get at the money. Now Willie must don the Santa suit again working undercover within the organization in order to pull off the biggest heist of his career.

Shauna Cross and Johnny Rosenthal have dreamed up this new yarn based on the original characters created by Glenn Ficarra and John Requa, but most of the film simply relies on various characters cursing at and insulting one another, and the overuse of the f-word becomes almost humorous in its ridiculous uber-repetitions. The only semblance of wit to be found in the film occurs when Willie (and occasionally Marcus and Sunny) verbally browbeat pedestrians to make them donate to their charity or feel guilty about passing them by, and Willie, as in the first film, must endure a series of Santa requests from a line-up of innocent children whose comments, questions, and wishes seemingly offer Billy Bob Thornton a chance to improvise profane responses to them. Otherwise, director Mark Waters seems to have a butt fetish since the camera gets focused on them at every available opportunity, and there is much talk of anal sex during the course of the movie. There’s a desperate change-of-heart scenario (similar to the ending of the original Bad Santa) worked into the climactic passages of the movie, prompted by the inclusion into the story of the now 21-year old Thurman Merman (Brett Kelly), an innocent man-child who still considers Willie his surrogate father, but it seems phony and untrue to the nihilistic nature of the comedy.

The cast gets right into the nature of the cursing and sex play, and no one holds back including the three Oscar winners who are part of the cast. Billy Bob Thornton seems a bit world-weary now, and the jibes and cracks are tossed off rather carelessly and haphazardly. Tony Cox struts his stuff as the cocky Marcus on the make for every luscious butt he can spy with his little eye. Kathy Bates certainly enters right into the thick of the raunch with putdowns for every occasion and nothing nice to say about anyone (she also doesn’t shy away from using the facilities right on camera as a cheap source of more putdown humor by the men she’s sharing a room with). Christina Hendricks and Ryan Hansen play the marriage-of-convenience couple who head the charity but with each cheating on the other when the mood arises. Hendricks’ major contributions to the film involve two sex scenes, one in an alley and the other in a Christmas tree lot which display her, shall we say, sexual versatility, and Hansen has even less to do as the smarmy hubby. So does Octavia Spencer wasted in a one scene cameo as a hooker hired to teach Thurman the facts of life. Brett Kelly’s Thurman is charming in his innocence and naiveté and amid all the treachery and sexual debauchery, his character is a welcome relief every time he appears despite its one-note quality. Jenny Zigrino plays an amply endowed (front and rear) charity worker on whom Marcus fixates.

The film’s original theatrical 1.85:1 aspect ratio is faithfully delivered in this 2160p transfer using the HEVC codec. Sharpness is really startlingly good throughout especially in seeing textures in hair and clothes. Color is rich and warm (despite the cold Chicago winter being portrayed) with skin tones especially believable. Contrast is wonderfully consistent in this transfer, and the use of HDR isn’t overdone with the exception of a very bright array of white light pouring through chapel windows during a Christmas concert which will make one momentarily squint. The movie has been divided into 18 chapters.

The DTS-HD Master Audio 5.1 sound mix is fairly typical of a comedy soundtrack though to their credit, the sound engineers have given us a couple of excellent moments of directionalized dialogue (most of the speech is relegated to the center channel) and have spread the Lyle Workman background score and occasional Christmas perennials (like Andy Williams’ “It’s the Most Wonderful Time of the Year” and “Silent Night”) nicely through the soundstage. Other ambient sounds also get split soundfield treatment though it’s not as much in more sophisticated mixes.

The UHD disc offers no bonus material other than both versions of the movie. All of the following bonuses are found on the enclosed Blu-ray disc in this set.

Theatrical Version/Unrated Version: the view makes a choice in the main menu with the unrated version running about two minutes longer.

Thurman Then & Now (2:27, HD): Brett Kelly comments on the changes his character has undergone from the original film to this new one, and he’s abetted with comments from director Mark Waters and actors Kathy Bates and Billy Bob Thornton.

Jingle Balls (0:35, HD): the spew of profanity from the film is clipped via autotune to the melody of “Jingle Bells.”

Deleted Scenes (2:41, HD): in montage, not available to view separately and mostly comprised of the scenes put back into the unrated version of the film.

Promo Trailers (HD): The Infiltrator, A Walk in the Woods, 99 Homes, The Dark Horse.

Bad Santa 2 offers more of the same raunch and political incorrectness that was found in the original film but with less effect and lesser appeal. Fans will certainly relish the exquisite picture quality of the UHD release, presently a Best Buy exclusive (the Amazon link below is for the Blu-ray release of the movie). Otherwise, a rental might suffice for those who want more of this kind of comedy. 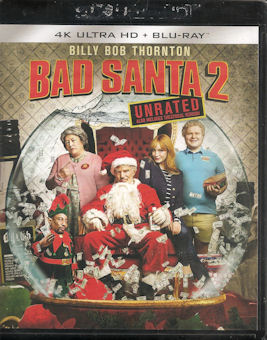