Bad Day at Black Rock, a highly suspenseful M-G-M thriller with a cast populated by no fewer than five Academy Award winners, arrives on Blu-ray with a stunning transfer courtesy of the Warner Archive.

I don’t care anything about Black Rock. Only it just seems to me that there aren’t many towns like this in America. But one town like it is enough. And because I think something kind of bad happened here, Miss Wirth. – John Macreedy

Bad Day at Black Rock opens with dramatic Cinemascope aerial footage of the Southern Pacific Streamliner from Los Angeles flying across the railroad tracks over the Mojave Desert in California. It is the autumn of 1945, and to the astonishment of everyone in the tiny town of Black Rock the train stops to drop off a passenger, something it has not done since World War II began. The passenger is John Macreedy (Spencer Tracy), a middle-aged one-armed man in a black suit. An alarm is raised when Macreedy lets it be known that he wants to visit a place called Adobe Flat.

The cowboys who inhabit Black Rock are not a particularly hospitable sort. Two cowboys, Coley Trimble (Ernest Borgnine) and Hector David (Lee Marvin) are openly hostile toward Macreedy. The only hotel in town is seemingly empty but the hotel manager, Pete Wirth (John Ericson), tries to tell Macreedy that there are no rooms available. Macreedy, a soft-spoken man who nevertheless projects an aura of authority, refuses to take “no” for an answer and essentially checks himself in.

Eventually the rancher who actually runs Black Rock, Reno Smith (Robert Ryan), arrives in town and in a more conciliatory tone tries to find out what Macreedy is up to. First he sends a wire to a private investigator in Los Angeles in an effort to find out who the mysterious stranger really is, but it turns out that Macreedy is unknown there. Smith strikes up a conversation with the stranger and learns that he is looking for a man named Komoko. Smith acknowledges that there had been a Japanese farmer named Komoko in Black Rock, but he claims that the man was sent to relocation camp after Pearl Harbor and was never heard from again. Macreedy had hoped to rent a car, but the only people in Black Rock who haven’t been openly hostile to him are Doc Velie (Walter Brennan), the local undertaker-veterinarian, and Sheriff Tim Horn (Dean Jagger), a shell of man who wants only to avoid trouble. While Macreedy is talking to Smith, the owner of the town’s gas station, Liz Wirth (Anne Francis), drives up and agrees to rent her jeep to him for a few hours. As Macreedy drives away for Adobe Flat, Smith ominously chides Liz. “This is liable to be the hardest ten dollars you ever earned in your life,” he warns her.

Director John Sturges, who received an Academy Award nomination for his work, fashioned a film which bears some resemblance to High Noon. In both movies a solitary man is trying to stand up for what is right, the difference here being that the residents of the town are, for the most part, openly opposing him. As is the case with HIgh Noon, no one in the town seems to be inclined to help him. Spencer Tracy also received an Academy Award nomination for his portrayal of Macreedy, whose soft-spoken ways belie his ability to defend himself. Robert Ryan, an actor who could project a subtle but unmistakable sense of menace, is chillingly effective as Reno Smith. Ernest Borgnine and Lee Marvin are excellent as Smith’s violent henchmen, and Walter Brennan is fine as the only man in Black Rock who displays some empathy for Macreedy. The beautiful Anne Francis has a small but important role as Liz Wirth, who is the only female character in the film, and Dean Jagger skillfully plays the sheriff whose conscience tells him that he should stand up for what is right but whose heart just isn’t up to it.

Bad Day at Black Rock moves along at a brisk pace, and the intense screenplay by Millard Kaufman (Raintree County, Take the High Ground, Never So Few) also was nominated for an Academy Award.

Bad Day at Black Rock is an early CinemaScope film that is properly framed at 2.40:1. Although it was filmed in the often problematical Eastman Color, our resident expert Robert A. Harris reports that this Blu-ray was “produced from a recent interpositive derived from the original negative,” and the result is nothing short of astonishing. The spectacular exteriors were shot on location in the Mojave Desert and Lone Pine, California by cinematographer William C. Mellor (Giant, The Diary of Anne Frank). The 1080p transfer is very sharp, with accurate colors, excellent contrast and shadow detail, and natural film grain.

The only audio track is English stereo, and it is excellent. Apparently there was an original four-track mag which no longer survives, but the audio will not disappoint and it is quite powerful at times. Dialog is clear and understandable, and SDH English subtitles are available.

The musical score by Andre Previn is very potent. Reportedly the original intent of producer Dory Schary was to release the film without any music at all.

The extras on this Blu-ray disc include an informative commentary track by film historian Dana Polan of the University of Southern California and the original theatrical trailer. The trailer is in good shape, although not as pristine as the film itself.

Bad Day at Black Rock is a superior western thriller which has been lovingly brought to Blu-ray by the Warner Archive. Readers who are interested in purchasing it can find it at the WB Shop or at Amazon. 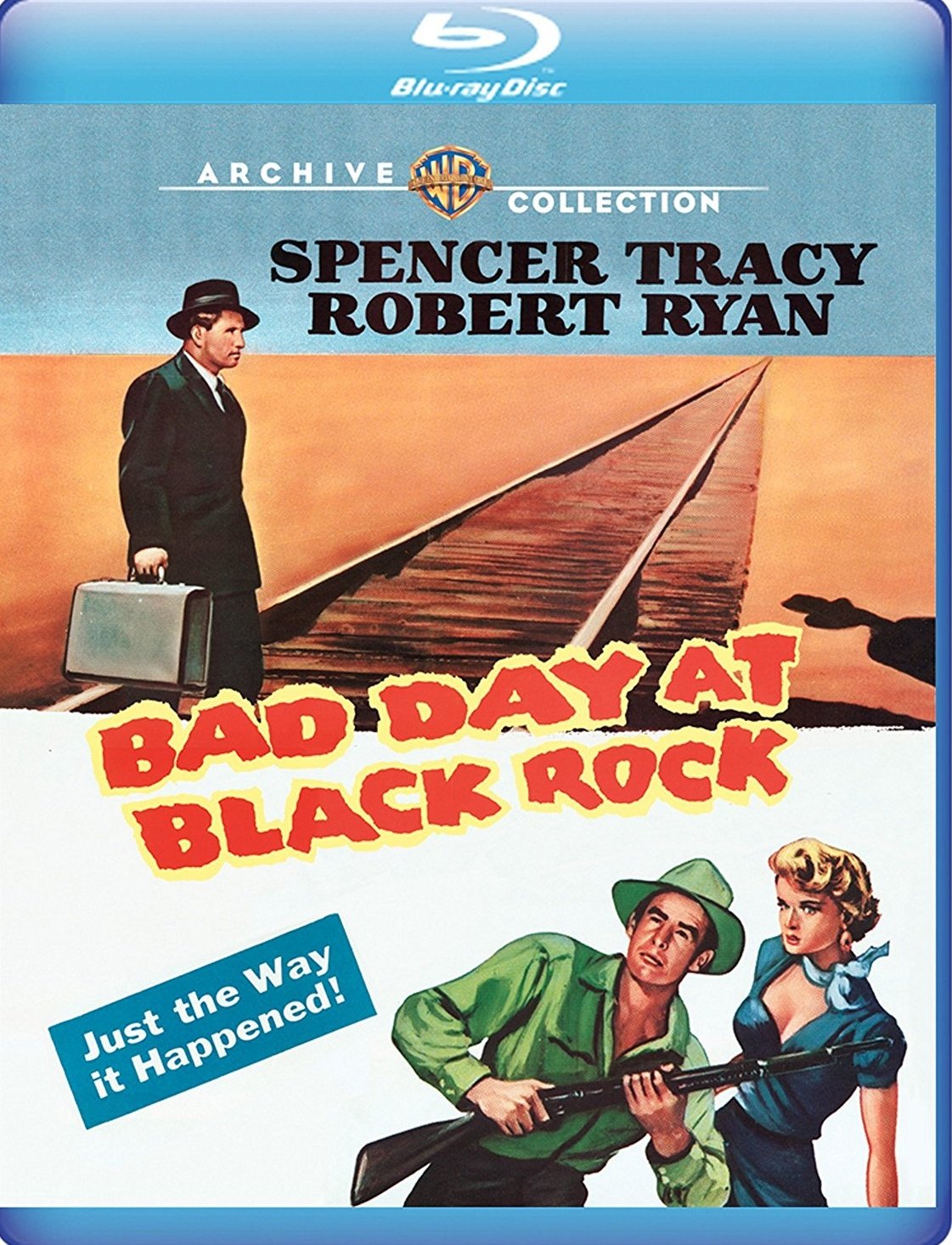