An obvious push for a new superhero teen movie franchise from toy company Mattel, Stewart Hendler’s Max Steel barely registers with a whimper. Despite a fresh-faced new leading man who remains appealing despite the preposterousness and banality all around him, Max Steel frustrates and irritates far more than it inspires, a deadly combination for a hoped-for new movie tentpole.

High schooler Max McGrath (Ben Winchell) makes his eighth or ninth move in his brief lifetime since the death of his father Jim (Mike Doyle), now back to his mother’s (Maria Bello) hometown to start over once again trying to make new friends and fit in. He’s disturbed to notice, however, that something strange has started happening to his body: energy pulses emanating from his hands that come along at random times and which he finds almost unable to be controlled. As they begin to get stronger, he finds himself being dogged by a curious alien robot who calls itself “Steel” (voiced by Josh Brener) and claims that the energy inside Max can only be contained by its joining to Max’s body so it can siphon off excess energy when the waves get too unwieldy to contain. Max senses that his mother knows something, but she refuses to talk to him about his father or their past, so instead Max goes to his father’s best friend Dr. Miles Edwards (Andy Garcia) who had worked with Jim on various energy projects. But Dr. Edwards is hiding a secret, a secret that will have a cosmic effect not only on Max and his mother but on the entire world as we know it.

The Christopher Yost screenplay is an infuriating one keeping the audience (and poor Max) in the dark about his bodily changes and the identity of this alien contraption zooming around the skies for far too long in order to create some kind of bogus suspense. Later, when we learn that Max’s mother knew the truth about all of this the entire time and had been “afraid” to talk things over with him (even though he seems a completely level-headed and mature teenager who loves and trusts her), it makes the story and certain characters even more frustrating and annoying. Naturally to pander to its target audience, there’s a teen romance built into the story: Max’s crush on the attractive and interested Sophia (Ana Villafañe) but whose dates with her are constantly interrupted when his energy levels begin to go haywire and he has to run away to hide his condition from her. There is also a mysterious hit squad that seems to be out to kill Max and Steel (their presence is also very badly explained and again put the mother in the very worst light possible), and director Stewart Hendler has been sure to include a fight to the death between Max and his murderous adversary (whose identity will only be a surprise to the youngest members of the audience who haven’t ever seen a superhero movie before).

Ben Winchell makes for a very appealing and ingratiating Max McGrath. He’s quiet and polite, not prone to hurtful wisecracks and more self-denigrating than critical of others, and one feels for him as he scratches and claws his way to understand who exactly he is. It’s hard to work up any sympathy toward or liking for Maria Bello as the mother who has kept a very vital secret from her son all his life and now even with a squad of men out to kill him, she has not come clean with her own child about what’s going on with him, and her hollow late film explanation to him about her reticence to reveal all never rings true. Andy Garcia does what he can with a poorly written role, and Mike Doyle who appears in flashbacks as Jim McGrath, a brilliant scientist with a major secret or two of his own, is effective insofar as his brief scenes go. Ana Villafañe has the thankless job of thwarted love interest for the movie, and while she and Ben Winchell do make a cute duo, their scenes are always brief and usually interrupted. Josh Brener as the voice of Steel has a fun time providing the movie with its only deliberate humor.

The film’s 2.40:1 theatrical aspect ratio is faithfully rendered in this 1080p transfer using the AVC codec. While sharpness is fine and color values are very strong including realistic and appealing skin tones, contrast levels aren’t always consistent, and Max’s energy levels sometimes send the town into total darkness but with slightly less impressive black levels than might have been wished. The movie has been divided into 20 chapters.

The DTS-HD Master Audio 5.1 sound mix is an exceptionally strong one with vibrant bass levels that will be rattling your windows with their depth and power. Dialogue has been well recorded and has been placed in the center channel. Nathan Lanier’s background score gets the full surround treatment, and atmospheric effects likewise get fully utilized in panning sounds across and through the soundstage during the several noisy action set pieces in the movie.

Finding Max (4:24, HD): producers Bill O’Dowd and Julia Pistor and director Stewart Hendler describe the search for the actor to play Max. Star Ben Winchell describes his audition process and the stunt training he went through after being cast. Maria Bello, Andy Garcia, and Ana Villafañe also sing the praises of the film’s young leading man.

Imagining Steel (3:37, HD): the film’s robot alien is described by director Stewart Hendler. Star Ben Winchell describes how he had to use his imagination to talk to the air during his character’s conversations with Steel.

Behind the Stunts (3:00, HD): the film’s stunt coordinator discusses the work necessary to bring the film to life, and the stunt team is praised by producer Bill O’Dowd and star Ben Winchell.

I wouldn’t be holding my breath for any further installments of the Max Steel franchise. This earthbound superhero adventure is more annoying than exhilarating, and even with a likeable young actor in the leading role, the film just doesn’t fly. The Blu-ray presentation, however, is first-rate for those interested in sampling it. 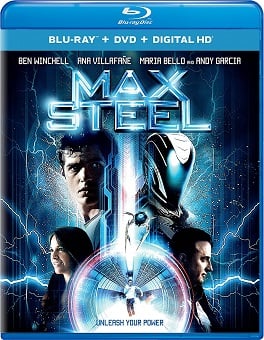