Guy Ritchie’s live action remake of Disney’s animated classic Aladdin is fun and flashy, but lacks the wild spontaneity and show-stopping quality in its musical numbers that made the original so endearing.

“Street rat” Aladdin (Mena Massoud) meets Princess Jasmine (Naomi Scott) in the markets of Agrabah, saving her from being accused of shoplifting. He falls in love with her, but they are forbidden to be married since he is not a prince. Until one day, Aladdin is offered the chance by Sultan advisor Jafar (Marwan Kenzari) to retrieve a magic lamp from the Cave of Wonders. Aladdin succeeds in finding the lamp, but is trapped inside the cave when he is double-crossed by Jafar, and unleashes a blue genie (Will Smith), who grants him three wishes. Aladdin uses one of his wishes to get closer to Jasmine, but the power-hungry Jafar soon learns of the ruse, hoping to steal the lamp back from Aladdin and unseat the Sultan (Navid Negahban) once and for all.

Disney’s live action output over the last few years has been primarily live action remakes of their animated classics, ranging from the interesting and original (Maleficent) to very good (Cinderella, Beauty and the Beast) to the mediocre (Dumbo). Guy Ritchie’s Aladdin remake falls somewhere in-between Dumbo and Beauty and the Beast. As usual for the director, Aladdin is very much eye-candy, with gorgeous set design and using multiple frame rates to achieve some eye-popping visuals. The two leads, Mena Massoud and Naomi Scott, are very good as the two star-crossed lovers to-be, although the real on-screen chemistry belongs to Jasmine’s hand maiden Dalia (former SNL cast member Nasim Pedrad) and Genie (Will Smith), one of the few original additions to this remake. As good as Smith is as Genie, and he does have a few truly comedic moments, his performance is often dwarfed by that of Robin Williams, who truly made Genie his own in the 1992 animated original, a perfect marriage of comedic voice acting and animation. To hamper the character of Genie even more in this version, his two musical numbers come nowhere near the show-stoppers that they were in the 1992 version, Friend Like Me and Prince Ali. They are perfectly fine here, but just don’t have the spontaneity and manic charisma that Robin Williams and the animators brought to those songs. This live action of Aladdin is certainly well done and very entertaining, but pales in comparison to the original on most counts.

Aladdin was captured in 2.8k and 3.4k resolutions using Arri Alexa Mini and SXT cameras, and I suspect it was likely completed as a 2K digital intermediate (with an aspect ratio of 2.39:1) considering the amount of visual effects work that was completed for the film. Disney’s UHD release contains an upscaled 2160p transfer with HDR10 high dynamic range. While the UHD may appear darker at first than its Blu-ray counterpart, I found the Blu-ray to appear almost washed out in some cases, with many of the colors appearing almost too vivid. The UHD tones them down a bit, but also allows for better shading of those colors, providing much more visual information, particularly in the multi-colored costumes. Pay particular attention to Aladdin’s red vest, which has a much more distinct pattern on the UHD than it does on Blu-ray. Contrast is better controlled on the UHD, with deeper blacks with greater shadow detail and daytime exteriors that do not appear blown out.

Aladdin comes with a fun Dolby Atmos track on UHD that improves upon the already splendid DTS-HD MA 7.1 track found on the Blu-ray, once you bump the master volume up a notch or two. The LFE is rich and full, giving the track a nice low end. Heights are implored as music and atmospheric extension as well as some discrete effects, particularly within the Cave of Wonders and the big finale. Dialogue is clear and understandable throughout.

As with nearly ever Disney UHD release, all of the special features can be found on the included Blu-ray edition and online after redeeming your Movies Anywhere code. What is included are pretty standard, run of the mill featurettes.

Aladdin’s Video Journal: A New Fantastic Point of View (1080p; 10:39): That’s a fairly bold statement. Actor Mena Massoud (Aladdin) records some behind the scenes footage on his smartphone. Unfortunately, his footage is as bland as it sounds.

Guy Ritchie: A Cinematic Genie (1080p; 5:28): A look at the director’s style of filmmaking and why he wanted to make this film.

A Friend Like Genie (1080p; 4:31): Will Smith discusses taking on the role of Genie and the challenge of paying homage to Robin Williams while trying to bring an original spin to the character.

Make Way For Prince Ali (1080p; 1:55): A very brief behind the scenes look at the production of the Prince Ali musical number. A Vudu exclusive.

The live action Aladdin is a movie that grew on me, having mixed reactions when screening during its theatrical run, but enjoying it a bit more on this second viewing, although it still pales in comparison to the animated original. 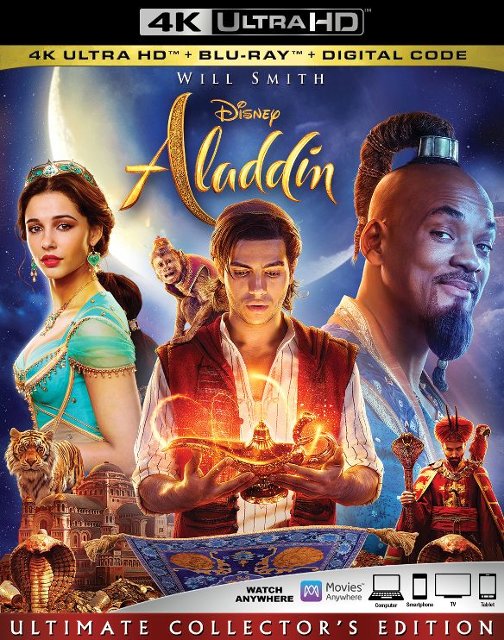