Ron Clements and John Musker hit a second home run in a row after The Little Mermaid with Aladdin in 1992. Taking the classic tale from The Book of One Thousand and One Nights (aka Arabian Nights) and placing a Disney spin, this is, perhaps, their most cartoony (for lack of a better term) of their animated features, thanks mostly for the manic spirit of Robin Williams as the Genie that infuses the film from beginning to end. Aladdin is really an action comedy first and foremost, with spectacular music numbers thrown in for good measure (including the show-stoppers Friend Like Me and Prince Ali).

This is the first time since the movie’s original DVD release in 2004 that Aladdin has been presented in the 1.66:1 aspect ratio. This is true of both the UHD disc and the included Signature Collection Blu-ray edition (the previous Diamond Edition was 1.85:1). The UHD disc features a 2160p upscale with HDR10 high dynamic range that although does not provide a noticeable improvement in fine detail, it does provide a marked improvement in color gamut and contrast. This is noticeably a bit darker overall than the Blu-ray, with deeper blacks that help the nighttime sequences to not have that obvious day-for-night look. Colors are more robust, especially blue and red tones, without blooming, and sparkles and gold have a shimmer to them that is missing on the Blu-ray.

Aladdin on UHD comes with a new Dolby Atmos remix that, once the master volume is bumped up a few notches, is a more immersive experience than the DTS-HD MA 7.1 mix found on the included Blu-ray. The twinkling sounds of Jafar’s flying gold scarab in the opening sequence flitters around the room with much more precision as it locates the Cave of Wonders, for example, while the musical numbers receive a nice extension into the area above the viewers. LFE is adequate (this was an early Dolby Digital 5.1 theatrical release), and does add a chilling low end to Jafar’s voice. Dialogue is clear and understandable throughout.

Although the UHD disc contains no special features, the included Blu-ray contains three new featurettes, plus a few holdovers from the previous Diamond Edition, and a wealth of archival features available online when you redeem your Movies Anywhere code.

Aladdin on “Aladdin” (1080p; 30:27): The voice of Aladdin, Scott Weinger, now grown up, looks back at his work on the film and talks with many of the people who also worked on the film. **NEW** to this edition.

Classic Bonus Preview (1080p; 0:59): A quick look at what archived extras are available online when you redeem your Movies Anywhere code. **NEW** to this edition.

The Genie Outtakes (10080p; 8:53): As a tribute to the late Robin Williams, directors John Musker and Ron Clements and Genie animator Eric Goldberg introduce a series of Williams audio outtakes not used in the finished film accompanied by storyboards and animated clips.

Genie 101 (1080p; 3:59): Original Aladdin voice Scott Weinger explains all of the references to real-life persons imitated by Robin Williams as the Genie.

Ron & John: You Ain’t Never Had a Friend Like Me (1080p; 5:36): Directors John Musker and Ron Clements talk about their thirty-nine year friendship.

Song Selection (1080p; 13:20): Jump to your favorite song from the movie with on-screen karaoke lyrics – Arabian Nights, One Jump Ahead, One Jump Ahead Reprise, Friend Like Me, Prince Ali, A Whole New World and Prince Ali Reprise.

Audio Commentaries: Directors John Musker and Ron Clements and producer Amy Pell share one track while animators Andreas Deja, Will Finn, Eric Goldberg, and Glen Keane take part in the other. For the complete Aladdin experience, one must listen to both tracks as much valuable information is imparted about the film’s chaotic production.

Drawing Genie (1080p; 2:12): Animator Eric Goldberg sketches the Genie as he discusses his career as an animator. New digital exclusive.

The following archival features are available online at select retailers when you redeem your Movies Anywhere code:

The Art of Aladdin: Art Review with Filmmakers’ Commentary

Inside the Genie’s Lamp: Guided Tour

Deleted Scene: Aladdin in the Lap of Luxury

Behind the Scenes “Proud of Your Boy” Performed by Clay Aiken

Music Video “Proud of Your Boy” Performed by Clay Aiken

A Diamond in the Rough: The Making of Aladdin: The Animators

A Diamond in the Rough: The Making of Aladdin: The Music

A Diamond in the Rough: The Making of Aladdin: The Producers

A Diamond in the Rough: The Making of Aladdin: The Voice Talent

Aladdin has been one of my favorite animated films since I first saw it I theaters back during its original release. The UHD is a nice upgrade, especially for those who never upgraded from DVD. 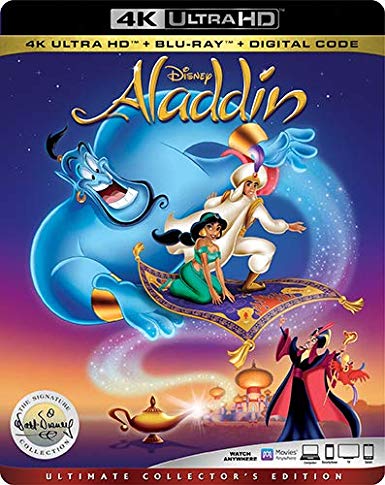