One could easily be led to believe, by viewing the new 4k of Edward Zwick’s 1989 Glory, that the folks at Columbia have a secret sauce, enabling them to perfectly capture the appearance of an OCN Print to one of those tiny discs, we call Blu-ray.

Especially, projected, the velvety textures of the grain make it obvious that one is viewing something very special.

As a film, Glory holds up beautifully, as history told as at least close to history.

That Glory concerns the first all-colored Civil War battalion, led by one Robert Gould Shaw, of the Boston Shaw’s, who set about to gather and train a fighting force that few in leadership believed was worth gathering or training.

They would be proven wrong.

Had they not, we would not have Glory.

Nominated for five Academy Awards, it took three, for Freddie Francis’ cinematography, for Best Sound and for Best Actor in a Supporting role, which placed Denzel Washington properly at the top of his craft. One look at his work over the following three decades, and you’ll find that his talent remains totally intact.

The majority of the cast is black, with Matthew Broderick and Cary Elwes leading the officers in charge.

The trick in creating any film, is that audience must care about those on screen, and here, one cannot but care, and be concerned.

Keeping in mind some beautifully choreographed battle scenes – there are no digital soldiers in this film, it’s hard to believe that it was produced for a reported eighteen million dollars. I would have guessed far higher.

Of interest, is that the story of about the colored ex-slaves and free men, who become soldiers, but the film is told from the perspective (based upon his letters) of Shaw, along with two books. The screenplay is by Kevin Jarre, who held an interest in the Civil War.

Upgrade from Blu-ray – Without a doubt! 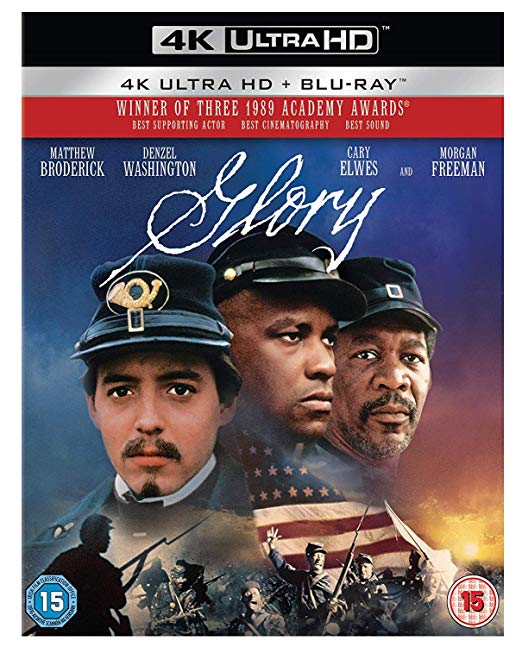