Zelig is one of the greatest mock documentaries ever made, a hilarious and touching look through miraculously created sights and sounds at a sad soul who’s transformed by the love of a wonderful woman.

Produced during the most fertile period of his film career, Woody Allen’s faux documentary Zelig is awash in marvelously creative ideas, technical wizardry incredible for its day, and a surprisingly involving story of someone who never lived but probably should have. If it misses the truly touching emotional center of Hannah and Her Sisters or The Purple Rose of Cairo, Zelig remains one of Woody Allen’s most remarkable creations.

Emerging in the late 1920s as an enigmatic physiological anomaly, Leonard Zelig (Woody Allen) is a man so lacking in confidence and personality that he’s able to transform himself chameleon-like into the very people who might surround him at any given moment. Psychiatrist Eudora Fletcher (Mia Farrow in flashbacks, Ellen Garrison in present day interviews) commits herself to helping the troubled soul into finding himself within and allowing his own personality to flower rather than his constantly retreating into the personas of others. Zelig’s uniqueness establishes him for a time as a tremendous attraction, but as scandals erupt in his life, the public predictably turns eroding all of Dr. Fletcher’s careful treatment of his psychological problems as Zelig returns to his chameleon-like tendencies.

Painstakingly produced through careful manipulation of existing old movie footage and stills combined with new footage which has been aged and weathered to appear as authentic as much of the real-life materials, Zelig is a masterwork of special effects management and creative pluck. Woody Allen’s script catches not only the zany breathlessness of the Roaring ‘20s but also manages to satirize the public’s easy tendency to bore quickly and turn on once-beloved celebrities with shocking abruptness at the first hint of scandal (something the director himself would become intimately familiar with in the decades ahead). As “Zelig fever” reaches its climax, he inspires hit songs (Mae Questel mimes Helen Kane warbling one of them), a dance craze (simply hilarious as couples jerk back and forth and dart their tongues out at each other), and even a Warner Bros. movie biography. But the inspired insertion of Woody Allen and Mia Farrow into real-life footage and stills of a raft of 1920s show business and athletic celebrities, national and international politicians, and assorted literary titans along with present-day pronouncements on the extraordinary life of this one-of-a-kind oddity from such real world notables as Susan Sontag, Irving Howe, Saul Bellow and Dr. Bruno Bettenheim lend a true air of seriousness to the ridiculously outrageous premise mixing the fact and farce with tremendous vitality and inviting appeal.

Mia Farrow’s performance in the interview and clinical footage show the actress truly developing a rounded character of great sympathy and appeal. Woody Allen’s performance, much of it captured in stills showing his various transformations, is much less demanding on him performance-wise, but one suspects he had his hands full trying to film modern day actors in period clothes and furnishings so they could be skillfully blended with old footage making this one of his rare movies in which his work as a director is much more crucial than his work as an actor. Ellen Garrison makes an astonishing older Eudora Fletcher looking eerily like Mia Farrow and delivering a remarkably good performance. Patrick Horgan serves as a most effective narrator for the documentary while Mia Farrow’s real-life sister Stephanie appears in a few scenes as Dr. Fletcher’s aviatrix-sister Meryl. But the hit of the movie is Jean Trowbridge as Dr. Fletcher’s ornery mother Katherine. Her sequence lasts barely a minute, but the interview she gives as a feisty, arbitrary respondent to an unctuous reporter’s desperate attempts to paint Eudora with cotton candy goodness is fall down funny and one of the most inspired segments in a movie simply brimming with them.

The movie is presented in its theatrical 1.85:1 aspect ratio and is offered in 1080p resolution using the AVC codec. Recreating the look of the film from cinemas, the footage representing the 1920s and early 1930s is scratched, dirty, grainy, and often blown out with contrast which makes black levels erratic and sharpness often soft and lacking detail (and in probably the film’s only misstep, cropped to fit the modern day aspect ratio instead of utilizing the older Academy dimensions) while the modern day interviews offer warm, accurate color and greater sharpness and detail (though there is an occasional dust speck here, too, possibly part of the original photography or possibly an age-related artifact). The movie has been divided into 24 chapters.

The DTS-HD Master Audio 2.0 mono sound mix is typical Woody Allen mono audio from this period of his filmmaking career. It’s appropriate, of course, in representing the tinny audio dynamics of the 1920s while modern day interviews feature solid audio without the hiss and crackle evident in the “old” footage used in the documentary.

Six-Page Booklet: features some black and white stills, original poster art on the back cover, and film historian Julie Kirgo’s effusive analysis of the movie.

Zelig is one of the greatest mock documentaries ever made, a hilarious and touching look through miraculously created sights and sounds at a sad soul who’s transformed by the love of a wonderful woman. There are only 3,000 copies of this Blu-ray available. Those interested in purchasing it should go to either www.twilighttimemovies.com or www.screenarchives.com to see if product is still in stock. Information about the movie can also be found via Facebook at www.facebook.com/twilighttimemovies.

One of Woody's best films and a easy buy for the Blu-ray.
Reactions: Peter Keller, PMF and Ahab

Thanks, Matt. It's great to know the film has been preserved on Blu ray in an optimal presentation. I, too, loved this film on first viewing. For some reason, I've never owned a home video copy of the movie and have never seen it aired on television.

I'm in for a treat, I'm sure!
Reactions: Peter Keller, PMF and Matt Hough
P

"Zelig" is a deftly executed piece of filmmaking and well worth owning.
Superior in its concepts and variations to "The Purple Rose of Cairo" and with a vision that pre-dated "Forrest Gump".
It is both a brilliant and vastly original work.
Last edited: Jul 29, 2016
Reactions: Peter Keller
You must log in or register to reply here.
Share:
Facebook Twitter Reddit Pinterest Tumblr WhatsApp Email Link 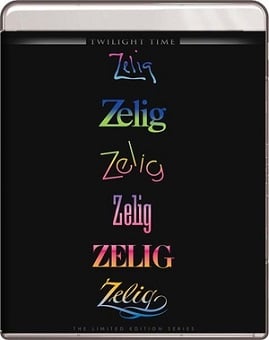