Pedro Almodovar’s Women on the Verge of a Nervous Breakdown mixes slapstick farce with a more serious undertone to its comic shell to offer what may be the first screwball dramedy.

Faced with desertion by her lover Ivan (Fernando Guillén) just as she has learned that she’s pregnant, actress Pepa Marcos (Carmen Maura) feels completely out of control. After considering taking an overdose of sleeping pills and burning down her penthouse apartment, Pepa decides instead to confront Ivan to find out what’s wrong and attempt to patch up their relationship. She’s hindered in this by the appearance of the hysterical Candela (María Barranco) who’s stumbled on a Shiite terrorist cell, Ivan’s former wife Lucia (Julieta Serrano) who’s been two decades in a mental hospital and now out seeking vengeance, and Ivan’s son Carlos (Antonio Banderas) and his bitchy fiancé Marisa (Rossy de Palma) scoping out apartments to rent after their marriage.

As with all of Pedro Almodovar’s best works, women form the fulcrum for the action, and he’s got a handful of enormously complex and hilarious ladies at the forefront of his screenplay led front and center by his muse of the era Carmen Maura playing the unpredictable Pepa. Not only does she consider overdosing on pills ground up in gazpacho (a running gag that becomes a centerpiece of the farce) or burning down her place, she actually goes through initially with her plans making the viewer feel early on that just about anything can happen in this movie. Almodovar’s confidence as a director is so obvious throughout the film as he tries lots of different motifs with his actors: in extreme close-up, staring straight at the camera, with sight gags like a series of objects being tossed out a window, and the frantically climactic race to the airport as the crazed Lucia who’s hijacked a motorcyclist with her two pistols (one is never enough) fires at her pursuers chasing her in the world’s most accommodating taxicab (another simply hilarious conceit in the film). The director’s love of movies is also manifest with homages to Johnny Guitar, Rear Window, some music from Vertigo on the soundtrack, and the romantic comedies Doris Day made famous only filtered through the writer-director’s exaggerated Spanish temperament.

As an actress who does dubbing work as well as appearing in a long running TV soap, Carmen Maura’s Pepa is definitely on the verge of a nervous breakdown in the early going, but interestingly, she gains control of herself as the film continues since she’s surrounded by a succession of people as frantic as she had been feeling and comes to take care of them as any good mother would (signaling that she should make a fine parent for her own child soon to appear). Maura milks all of the deadpan comic farce out of the character (she’s alternately tempestuous and sorrowful) while never sacrificing audience sympathy despite the extremity of some of her actions. María Barranco has some very funny bits as the frenetic Candela who is certain she’s on a terrorist hit list. Julieta Serrano as the outraged wife who loses all control of herself as the film runs adds immeasurably to the fun as we see her drop her sane façade and give in to her murderous intentions. Rossy de Palma spends a good chunk of the movie comatose, but she does get to enjoy before and after variations of her character Marisa, early-on a haughty snob and later a more understanding and grounded person. Most famous of the faces to American audiences here is, of course, Antonio Banderas as Ivan’s son Carlos, quick to make advances to the closest available girl. He’s still a pretty green performer here allowing his looks to carry the burden of his characterizations. Fernando Guillén as the faithless Ivan and Kiti Manver as Ivan’s lawyer Paulina Morales carry off their roles quite nicely. Very memorable is the affable Guillermo Montesinos as the taxi driver with a cab outfitted for the comfort and convenience of his customers.

The film’s original 1.85:1 theatrical aspect ratio is faithfully recreated in this 1080p transfer using the AVC codec. The film’s bright and bold color palette is reproduced beautifully with reds particularly vivid but never so bold as to bloom, and skin tones are quite appealing. Sharpness is superb in the transfer which has been cleaned up without losing any of the movie’s grain structure for a most film-like image. Contrast is superb, and black levels are rich and deep. The English subtitles are in white and are very easy to read. The movie has been divided into 16 chapters.

The disc offers the original Spanish 2.0 stereo track as well as a refitted 5.1 surround track, both presented in DTS-HD Master Audio. Both tracks are effective and have been spruced up by sound engineers so that no trace of age-related hiss, crackle, or flutter mars the listening experience. As the soundtrack is composed of original themes by Bernardo Bonezzi as well as classical pieces like “Scheherazade” and “Malagueña,” the rich sound offered on the disc is most appreciated. Ambient sounds don’t really get much of the benefit of the stereo and surround channels, however.

Pedro Almodovar Interview (16:53, HD): a 2016 interview with the filmmaker in Madrid finds him grateful for this first great international success. He tells the film’s story and explains how he based his idea on a play by Jean Cocteau, expresses his pleasure at showing characters always on the edge in his films, and exclaims joy about his uses of color in his movies.

Carmen Maura Interview (19:07, HD): this 2016 interview finds the actress proud at age 71 of her career as an actress and especially is proud of Women on the Verge of a Nervous Breakdown since it was the first role ever written expressly for her.

Agustin Almodovar Interview (16:12, HD): the brother of the film’s writer and director discusses his career of working with his sibling and his learn-by-doing approach to filmmaking. He is also proud of his brother’s strong presentation of women’s problems and behaviors and discusses his brother’s working techniques which he makes it his job to accommodate as his producer.

Richard Peña Interview (11:06, HD): the head of the New York Film Festival discusses his extreme good luck to find the movie to use as the opening night attraction at his first festival program and then discusses its place in the filmmaker’s previous and subsequent career.

Enclosed Pamphlet: contains the cast and crew list, information on the film’s audio and video transfer, and a thoughtful essay on the film and its creator by writer Elvira Lindo.

Women on the Verge of a Nervous Breakdown remains one of the essential works by Spanish filmmaker Pedro Almodovar, and its combination of brittle farce and dramatic tension still plays like gangbusters in today’s cinematic climate. Highly recommended! 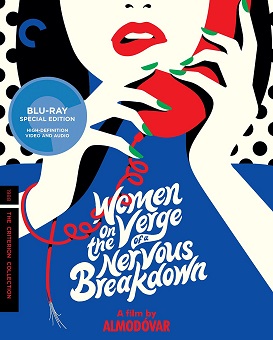