This follow-up to 2012’s Jack Reacher, Never Go Back is an enjoyable ride as action films go, but comes nowhere near the momentum and clever twists and turns of the original.

When I first viewed Jack Reacher in 2012, I went in with extremely low expectations. At the time, Cruise had more or less been written off by Hollywood. With the exception of Mission: Impossible – Ghost Protocol, the films Lions for Lambs, Valkyrie,  Knight and Day, and Rock of Ages had been box office disappointments for their studios. It didn’t help that the teaser trailer for Jack Reacher relayed absolutely nothing about the film, other than Tom Cruise was playing a bad ass that drove a muscle car. The movie widely surpassed my expectations, and I really enjoyed it.

Fast forward to the present, and I found myself with high expectations for the sequel, Jack Reacher: Never Go Back. Jack Reacher (Tom Cruise) is on his way to Washington, D.C. to have dinner (and possibly more) with Major Susan Turner (Cobie Smulders), who has taken his old position in the nation’s capitol and the two have been working cases over the phone for some time. When Reacher arrives at Major Turner’s office, he finds that she has been arrested for espionage, and as he begins to dig deeper, he is also arrested for the same crimes as an accomplice. He breaks himself and Turner out of prison, save a young girl, Samantha (Danika Yarosh), who may or may not be Reacher’s daughter, and head to New Orleans to uncover the mystery and clear their names. It’s a simple enough story, but one we’ve possibly seen several times before. Director Edward Zwick manages to stage some nice action set pieces and keep the story moving at a nice enough pace, but the movie lacks the twists and turns of the first film, as well as the sense of humor and interesting supporting characters. Cobie Smulders is fine as Major Turner, but the character is not that much different from her Maria Hill character from the Marvel Cinematic Universe. Aldis Hodge’s character, Espin, is never really given enough screen time for us to connect with him, and feels more like a plot device than anything else. Jack Reacher: Never Go Back isn’t a bad film, as I did find it rather entertaining, but it could have been so much better, perhaps under a different director and a more developed screenplay.

Jack Reacher: Never Go Back was shot on 35mm film stock and completed as a 2K digital intermediate. The movie has been upscaled to 2160p and enhanced with HDR, and the results are a noticeable improvement over the 1080p Blu-ray, which still looks exceptional. Detail is where this transfer excels over the Blu-ray, with richer textures in fabrics and backgrounds, as well as skin imperfections (such as wrinkles and beard stubble). Film grain is also more defined but not overly noticeable. Colors are more natural, with a wider range of gradients. Contrast is improved somewhat, with better shadow detail in darker scenes.

The UHD disc contains the same Dolby Atmos track that can be found on the Blu-ray edition. When played back on non-Atmos capable systems, the track defaults to Dolby TrueHD 7.1. My home theater space is set up in a 5.1 configuration, but with added heights in the front, and I play back films mixed in Atmos with Dolby Pro-Logic IIz enabled. In this configuration, heights are used subtly for atmospheric effects, while the rest of the speakers are used to full effect with very active surrounds and an exceptionally deep low-end that enhance punches, crashes, and explosions. Dialogue is directed mostly to the center channel, with occasional panning where necessary, yet never gets lost or drowned out by the mix.

Reacher Returns (1080p; 11:31): Cruise, author Lee Childs, and other members of the cast and crew discuss the character of Jack Reacher.

An Unexpected Family (1080p; 14:31): A look at the dysfunctional family of Reacher, Turner, and Samantha.

Reacher In Focus: With Tom Cruise and Photographer David James (1080p; 8:33): A look at still photography on the set.

Digital HD Copy: An insert contains a code to redeem a digital copy through Ultraviolet partners. If redeemed through VUDU, you will have access to a 4K UHD streaming version, if your device is supported.

Jack Reacher: Never Go Back was a bit of a disappointment for me, not a bad film, but nowhere near as good as the first Jack Reacher adventure. Hopefully, the poor box office won’t deter Paramount from green lighting further stories. The UHD is an improvement over the Blu-ray edition in the video department, and nothing else. 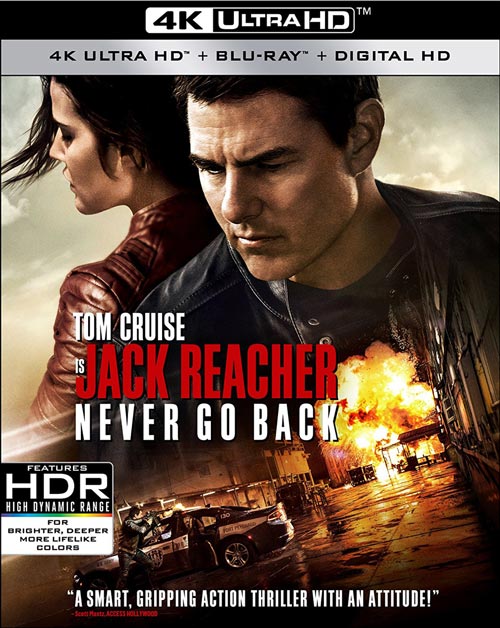