Woman on the Run is a tense and sometimes thrilling film noir which has been rescued from public domain purgatory by the Film Noir Foundation and the UCLA Film & Television Archive. It is now available on Blu-ray from Flicker Alley in a set which includes an outstanding array of extras and a DVD.

No wonder the world is full of bachelors. – Inspector Ferris

Frank Johnson (Ross Elliott) is taking his dog for a walk on a dark night in San Francisco. They climb the stone steps above a street and when they reach a landing Johnson pauses to light his pipe. A car on the street above them comes to a screeching stop. Johnson glances up at the car but takes no particular notice of it. Two men are inside the car, and one is complaining that both the police and a gangster named Smiley Freeman are gunning for him. It seems that the driver, a man nicknamed “Danny Boy,” took $20,000 from Freeman to kill a man, and his passenger knows it. He tells “Danny Boy” that if he is given $15,000 he will take it on the lam and the police will never know who did the killing.

“Danny Boy” says not a word. He responds to this attempt at blackmail by pulling out a gun and shooting his passenger twice, killing him with the second shot. Johnson’s dog starts to bark, and “Danny Boy” steps out of his car long enough for Johnson to get a good look at him. The killer fires two shots at Johnson, but both man and dog scramble behind the stone steps and they are unharmed. “Danny Boy” gets back into his car and drives away. Johnson then scrambles up the hill and confirms that the passenger is dead.

The police are summoned, and Johnson remains at the scene to tell them what he saw. Inspector Ferris (Robert Keith) informs him that the dead man is Joe Gordon, a witness who was supposed to testify against Smiley Freeman. He wants to have Johnson identify the killer and be taken into protective custody as a witness. Johnson, who initially is cooperative, does not like that idea at all. When the police are distracted he scrambles down the hill, leaving his dog behind.

The police then go to visit Johnson’s wife, Eleanor (Ann Sheridan), who surprises them with her nonchalant attitude about her missing husband. It becomes clear that she and Frank have a strained relationship and their marriage is all but on the rocks. She is certain that Frank no longer loves her, and if he wants to run away that is his business. However, while the police are there Frank calls on the telephone, but Eleanor warns him to hang up before there is time to trace the call. The police then decide to keep an eye on her apartment building in case Frank comes to see her or she tries to go out to meet him.

Frank’s call has given Eleanor a slight change of heart and she decides to try to find out where he is. She avoids the police by climbing onto the roof of her building via a skylight, but there she runs into a newspaper reporter named Legget (Dennis O’Keefe), who has been trying to get in to interview her. He tells Eleanor that he is looking for a scoop. Initially she seems to go along with Legget, but she pulls a fast one and loses him. However, he catches up to her at a restaurant in Chinatown that she and Frank frequented. There Legget offers to pay Eleanor a thousand dollars if she helps him to land an exclusive interview with Frank.

“Trying to buy me so soon?” she responds.

She asks bemusedly, “Isn’t that the reverse of the usual procedure?”

“I’m a perverse fellow,” explains Legget. “On second thought, Mrs. J., I find you very attractive. I may try and win you right off.”

“No thanks,” Eleanor retorts. “I’d rather be bought.”

Before they leave a waiter brings over a menu for Eleanor to look at. On it is written a note by Frank that says he has sent a letter to her, addressed to the store where he is employed. When she gets home she is met by Inspector Ferris, who informs her that he has learned that Frank has a heart condition and that he may die if he fails to get his medication. The next day the cryptic letter arrives. It contains clues which Eleanor does not fully understand, so she and Legget set out to find Frank before he dies or is located by either the police or the killer.

Ann Sheridan is excellent and totally believable as the strong-willed Eleanor, and Dennis O’Keefe does a fine job of playing off of her. They are ably supported by actors who have familiar faces but whose names are not well-known, such as Robert Keith, John Qualen, and Frank Jenks. The film is ably directed by Norman Foster (Journey Into Fear), who keeps the action moving along in an economical 77 minutes (the packaging says 79 minutes, but that includes the restoration credits which appear prior to the Universal logo). A rollercoaster scene in the last reel is very impressive. The taut and occasionally witty script is by Foster and Alan Campbell (A Star is Born, Tales of Manhattan), and reportedly some of the dialogue was improvised by the actors.

We have seen an impressive array of classic film noir released on Blu-ray of late, and this release of Woman on the Run by Flicker Alley is one that fans of the genre will want to own.

This 1950 film has been preserved but not fully restored. Although there is some speckling throughout, it is unobtrusive and I hardly noticed it after the first few minutes. The big plus here is the transfer’s sharpness and the absence of any significant damage. That alone places this Flicker Alley Blu-ray heads and shoulder above every other home video release of Woman on the Run. The 1080p black & white image is framed at 1.37:1 and is encoded with the AVC codec. Contrast is strong and shadow detail is very good. Black levels are fine throughout.

The excellent cinematography by Hal Mohr (The Wild One, Destry Rides Again) makes superb use of locations in San Francisco, Santa Monica, and Los Angeles.

The audio on this Blu-ray is LCPM mono 48K, and it is terrific. There is scarcely a hint of noise and hiss, and the music by Arthur Lange and Emil Newman has excellent fidelity. Every word of dialogue is clear and understandable. The sounds of the rollercoaster are quite realistic.

Flicker Alley has included an impressive collection of extras with this Blu-ray/DVD set.

There is a very informative commentary track by Eddie Muller of the Film Noir Foundation, who probably knows more about Woman on the Run than any other living person.

“Love is a Rollercoaster: Woman on the Run Revisited” is a featurette which includes comments from Eddie Muller, film historian Kim Morgan, film historian Julie Kirgo, and film historian Alan Rode. As Julie points out, the real heart of the film is the relationship between Frank and Eleanor, yet we only get to see them together for a few moments. This featurette has a running time of 17 minutes.

“A Wild Ride: Restoring Woman on the Run” explains how the only known print of Woman on the Run was destroyed during the Universal fire in 2008. Eddie Muller learned that the British Film Institute had a nitrate dupe negative but it had no audio, and the one print which BFI had with audio had deteriorated so badly that it was unusable. Fortunately, prior to the fire Muller had been borrowing Universal’s print to show at his Noir City film noir festivals, and at one point he decided that it would be prudent to make a digital backup copy. The audio track from his digital copy was synched up with the BFI print. This featurette has a running time of five minutes.

“Woman on the Run Locations: Then and Now” is a feature that I would like to see on more Blu-rays. Multiple shots from the film are compared with recent photos of the same locations. One of the more interesting is the film’s opening scene, which was shot above the Hill Street Tunnel in the Bunker Hill area of Los Angeles.  The steps, the tunnel, and even the hill itself no longer exist.

“Noir City: A Short Documentary about San Francisco’s Annual Noir City Film Festival” is a 10-minute featurette about the film festival which takes place each year at the Castro Theatre. It will inspire you to add attending the festival to your bucket list.

Also included is a lavishly illustrated 24-page booklet which features an essay about Woman on the Run by Eddie Muller.

Woman on the Run was an independent production which was released by Universal but never owned by the studio. When the actual production company, Fidelity Pictures, went out of the business, the copyright was allowed to lapse. Consequently, until now only very poor public domain prints have been available on home video. This excellent Blu-ray set from Flicker Alley remedies that problem, and film noir enthusiasts who purchase it will help to ensure that more films from that classic period will find their way to the Film Noir Foundation.

Note: Amazon is currently listing this as a pre-order but it is in stock at the Flicker Alley website. 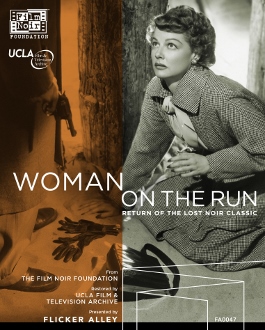