Posted on May 10, 2016 by Matt Hough
Disappointing comedy-drama with top-flight stars and director 2.5 Stars

Top flight actors and a notable director ought to add up to something a lot more substantial than Martin Ritt’s Back Roads, but the unsteady mixture of comedy and drama never takes flight.

Top flight actors and a notable director ought to add up to something a lot more substantial than Martin Ritt’s Back Roads, but the unsteady mixture of comedy and drama never takes flight. Some fleeting instances of accurate local color on this road trip movie are about all the film has to show for ninety minutes of pratfalls, mishaps, and some tentative stabs at human intimacy and understanding.

When ex-prizefighter and now drifter Elmore Pratt (Tommy Lee Jones) knocks out a street cop he thinks is harassing a good-natured hooker Amy Post (Sally Field) who’s just let him get away with a $20 freebie, the pair realizes they need to get out of Mobile for their own safety. Amy needs to leave anyway since her young son whom she gave away for adoption at birth has started noticing her staring at him from afar and his mother (Barbara Babcock) has asked her to stay away, so the duo decides to try their luck in Los Angeles if they can only get there. A series of misadventures where her savings are stolen, she’s near-raped by a quartet of sailors, the pair are almost squashed trying to hop a train, and other fun disasters mark their topsy-turvy travels across the southwest.

The script by Gary DeVore basically just sets up one catastrophe after another as each of the couple tries his or her best to earn survival money (he earns a few bucks selling blood to a local blood bank; she tries her hand at her practiced profession though something always seem to go wrong before she consummates the transaction), and the picaresque adventures really never seem to have much of a point or much of a payoff. There are some lengthier sequences directed by Martin Ritt that come close to achieving something interesting: an extended stroll around a Louisiana fairground with a friendly sailor (David Keith), a desperation boxing match for Elmore against the town bully and champion, but even these moments end badly. Seemingly intent on keeping the fun elements of the narrative at arm’s length, screenwriter DeVore plots a couple of pointless spats between the duo to add to their growing litany of troubles, and ultimately the movie simply stops rather than coming to some kind of satisfactory conclusion with the journey not yet over.

Oscar-winning actors like Sally Field and Tommy Lee Jones are experienced hands at forging characters that hold our attention (one of Field’s Oscars was under Ritt’s direction – Norma Rae; she’d make a much better film for Ritt a few years later – Murphy’s Romance), but the screenwriter hasn’t done them any favors here giving them such cardboard stereotypes to play, two street people drifting through life with few to no goals and no ability to plan for a brighter future. Worse, the two don’t share much chemistry together in their few scenes of intimacy (most of the time they’re heckling one another as she clatters through the back roads of America on three inch heels and he looks for ways to steal what he needs to survive). Only David Keith as the gullible sailor has a supporting role of any substance, and he’s excellent as his eyes are slowly opened to what’s actually going on. Other famous faces get a scene or two at most to show their stuff: Nell Carter as a determined waitress, Michael V. Gazzo as the boxing promoter, M. Emmet Walsh as a car wash manager, Barbara Babcock as the boy’s concerned mother, and Miriam Colon as a particularly dangerous pimp.

The film’s Panavision theatrical aspect ratio of 2.35:1 is delivered in a 1080i transfer using the AVC codec. The surprising interlaced nature of the transfer (the liner notes claim 1080p, but it isn’t) may account for some moiré patterns that are evident and the lack of razor-edged sharpness in the transfer. Color is nicely delineated with accurate flesh tones throughout. Black levels are average, and there are dust specks to be seen on occasion though they are not a major distraction. The movie has been divided into 8 chapters.

The DTS-HD Master Audio 2.0 mono mix is very typical of films from this era. Dialogue is usually very easy to understand (though looping of some outdoor shots is very noticeable). It’s been mixed carefully with Henry Mancini’s easy-going country-tinged score and the expected atmospheric effects. Only the slightest bit of soft hiss can be made out in some of the quieter scenes of the movie.

With agreeable leading and supporting actors and a first-rate director, Back Roads disappointingly emerges as no great shakes though it’s a moderately pleasant viewing experience for fans of the stars and the director even in this rather lackluster video presentation. 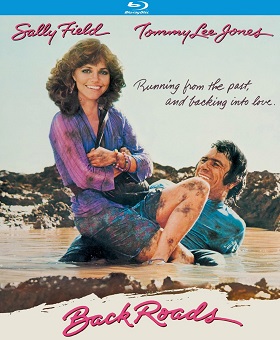