Mediocre thriller that should have been much better. 3 Stars

The shock machine that brought notoriety and riches to What Ever Happened to Baby Jane? and Hush…Hush, Sweet Charlotte was running a bit low on inspiration by the time of Curtis Harrington’s What’s the Matter with Helen?

The shock machine that brought notoriety and riches to What Ever Happened to Baby Jane? and Hush…Hush, Sweet Charlotte was running a bit low on inspiration by the time of Curtis Harrington’s What’s the Matter with Helen? Its story is a bit slow moving and obvious, and its chills are rather muted and undistinguished, so that even with sterling Hollywood pros like Debbie Reynolds, Shelley Winters, and Dennis Weaver doing the heavy lifting, the end result doesn’t quite deliver the goods.

After their sons are convicted of homicide in a highly publicized trial, Adelle Bruckner (Debbie Reynolds) and Helen Hill (Shelley Winters) begin receiving threatening phone calls vowing revenge and decide to begin their lives anew in Hollywood where Adelle can open a talent school for hopeful screen moppets and Helen can serve as piano accompanist. While the business does quite well, it isn’t long before mysterious things begin happening again. Helen becomes increasingly unstable and requires constant assurance from Adelle who longs to escape from her bad memories by marrying wealthy Linc Palmer (Dennis Weaver), the doting father of one of her students.

Henry Farrell, who had written the stories for those previous two Bette Davis shockers, once again provides the narrative for the film, but despite some chilling touches (a gruesomely stabbed cutout of dancing Debbie Reynolds, numerous tall strangers in shadows: any one of which might be a murderer, some ghastly memories of previous violence which intrude into Helen’s consciousness), the film never gathers suspenseful momentum nor sustains tension for anything more than a brief shock moment. Rather, the movie pauses at regular intervals to allow the very talented Debbie Reynolds to show her dexterity at tapping (two numbers) and a lengthy ballroom tango with superb support by marvelous Broadway dancer Swen Swenson and to offer several numbers by the school’s tiny tots performing at their recital (“Animal Crackers in My Soup” as an elaborate production number, a Mae West homage in “Oh, You Nasty Man”). Director Curtis Harrington rather botches the climax, too, as a series of horrifying discoveries, some involving bloody corpses, another involving a surprising bit of revelation) aren’t especially well fashioned to generate the intended thrill moments building to the final shock. In fact, the movie’s most successful sequence, almost an afterthought and wonderfully satiric even if its intentions are blunted, involves a broadcast prayer meeting headed by celebrity evangelist Sister Alma (Agnes Moorehead) whom Helen consults seeking absolution from her guilty secrets. Alma’s “Church of the Open Hand” is open handed indeed, constantly soliciting funds to keep the church broadcast operational with extra contrition given to the biggest contributors.

Debbie Reynolds has a real star role as Adelle whose platinum blonde locks in homage to Jean Harlow and her singing and dancing talents make it seem a shame she can’t seek a Hollywood screen career for herself rather than teaching small children. While she and twangy-talkin’ Texan Dennis Weaver make beautiful music together, the sexual hanky-panky has been kept to a minimum, a surprise since the Production Code’s influence had ended by 1971, and the movie could have been much more explicit about their sexual attraction. Shelley Winters’ role as the tentative and frightened Helen is much more neurotic and needy, but she hasn’t been especially well served by the screenwriter who constantly has her teetering on the verge of a nervous collapse one minute and seeming completely rational and calm the next. Winters’ final actions seem to come out of nowhere and really don’t make much sense. Micheal Mac Liammóir plays a former Shakespearean actor met with hard times and signed on as an elocution teacher at Adelle’s school while Agnes Moorehead simply steals the show as the crassly commercial evangelist Sister Alma. Helene Winston, Peggy Rea, Paulle Clark, Yvette Vickers, and Molly Dodd all excel as busybody stage mothers while Samee Lee Jones and Robbi Morgan get their moments to shine as kiddie clones of Shirley Temple and Mae West. Look fast for Timothy Carey in a brief bit, and Swen Swenson’s partnering of Reynolds in that sultry tango is quite something.

The film’s 1.85:1 theatrical aspect ratio comes to Blu-ray featuring 1080p resolution using the AVC codec. While most of the transfer looks just fine with very good sharpness and excellent color rendition (including believable skin tones), there are occasional intrusions of damage, specks, and debris along with a soft vertical band which runs down the center right area of the frame for an entire reel beginning about midway through the movie. The film has been divided into 12 chapters.

The DTS-HD Master Audio 2.0 mono sound mix is very typical of its era. Dialogue has been nicely recorded, and it’s been blended with surety with David Raksin’s moody background score and the atmospheric sound effects. Age-related problems with hiss, crackle, and flutter have been eliminated.

Art Gallery (3:25, HD): black and white and color stills, lobby cards, and poster art are combined into an animated montage.

What’s the Matter with Helen? doesn’t quite reach the heights of thrills and eerie ambiance that can be found in What Ever Happened to Baby Jane? or the compelling mysteries attached to Hush…Hush, Sweet Charlotte, but for a sad, sinister tale of 1930s Hollywood, it’s not bad, and the Blu-ray release of the movie should find a welcome audience for its fans.

I love the "psycho biddy" genre! So many weird and wonderful films in that genre, and a lot of them are out in blu-ray. In addition to the two you mentioned, there's The Baby, You'll Like My Mother, Strait Jacket, What Ever Happened To Aunt Alice, Whoever Slew Auntie Roo, The Nanny, Berserk, Dead Ringer, and Die Die My Darling. There was a brief flurry of the genre in the late 60s, then nothing more. The golden age of psycho biddy!
Reactions: Jimbo64

A guilty pleasure of mine!
You must log in or register to reply here. 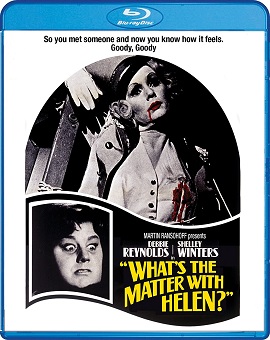