Carl Theodor Dreyer’s Vampyr is best appreciated as a visual-aural experience, a disquieting mix of story and character that is unquestionably one-of-a-kind.

Carl Theodor Dreyer’s Vampyr is an unsettling mix of shadows and the supernatural. Shot as something of a fever dream with continuity lapses, multiple points of view, and a story that stubbornly refuses to follow the rules of logical plotting, Vampyr is best appreciated as a visual-aural experience, a disquieting mix of story and character that is unquestionably one-of-a-kind. It’s the least “vampish” vampire movie ever made (i.e. there isn‘t a fang in sight), but that doesn’t prevent it from being creepy and compellingly different.

Studious, sensitive Allan Gray (Julian West, the screen name of the film’s co-producer Nicolas de Gunzburg) has great interest in the supernatural and especially in all things vampire, and he finds himself at a peculiar inn and interrupted while trying to fall asleep by the intrusion into his room by a troubled man (Maurice Schultz) who hands him a package which is not to be opened until his death. He’s sensing that death is near because his daughter Léone (Sybille Schmitz) has displayed signs of “blood infection” and is slowly dying, and he’s determined to prevent it if possible. Following the elderly man to his estate, Allan sees the effects of the “blood disease” and volunteers to donate his own blood for a transfusion. The doctor (Jan Hieronimko) performing the blood withdrawal, however, is in league with the local vampire Marguerite Chopin (Henriette Gérard), and he’s taken blood from Allan to weaken him and also bound Léone’s younger sister Gisèle (Rena Mandal) to prevent her from interfering with the final attack on the sadly weakened girl. It’s a race to see who will inevitably get the girl and whether good or evil will triumph.

The script by Carl Dreyer and Christen Jul has been culled from two stories in Sheridan Le Fanu’s In a Glass Darkly, but Dreyer’s direction is a more striking aspect of this production than his script. His concentration on shadows and reflections, many macabre and often surreal, and his tendency to hop jarringly from one set-up to another and back to the initial one gives the film an eerie ambiance, a disquieting sense of unbalanced reality that makes up for an otherwise genuine lack of traditionally “undead” production values. And he films two sequences that still stand out today over three-quarters of a century later. In the first, Allan dreams of his own burial while also watching it, and Dreyer shows it sporadically from a subjective point of view putting us in the casket with him and watching helplessly as events transpire. The climactic death of a major character in an unusual way (no spoilers offered here) is shown in visceral though discreet close-ups, too, a death that even the primitive sound of the era can’t sully. This was one of the earliest German sound films, and so much of its power is achieved from facial expressions, creepy images of turning skulls and wild-eyed characters, and camera effects (blood seeping into the dirt, double exposures, reverse motion) that were perfected during the silent era. Similarly, the soft-focused, fog-shrouded exteriors lend an eerie quality to the picture that can’t help but keep the viewer disquieted and with a sense of creeping dread.

Many of the actors in the film were amateurs, and their inexperience often shows. Julian West is fairly stiff and inexpressive though one can use his weakness as an actor as an example of his character’s basic ineffectualness. Rena Mandel as Allan’s love interest also is vacuously pretty but not very interesting. However, Sybille Schmitz makes a vivid impression as the victimized Léone, and Jan Hieronimko as the doctor, despite this being his first and only film, certainly delivers in a performance that brings to mind the demented sneer of Werner Krauss’ Doctor Caligari. Maurice Schultz appears only briefly as the lord of the manor, but he’s so strange that his presence hovers over the remainder of the movie.

The film is presented in its original aspect ratio of 1.19:1, one of the narrowest frames ever used in cinema and is offered in 1080p resolution using the AVC codec. The film is eighty-five years old and has been pieced together from multiple prints to arrive at this final product; thus, to say it’s in rough shape is an understatement. Obviously much as been done to bring it to even this level of presentation, but that doesn’t mean there aren’t many white and black scratches, small tears, an occasional hair, and with a limited grayscale that features only average blacks and sometimes very milky contrast and deliberate softness in all of the outdoor photography. Whites are somewhat better, and the interior camerawork is a great deal sharper. The white subtitles are easier to read in this Blu-ray update than in the 2008 DVD release. The film has been divided into 16 chapters.

The PCM 1.0 (1.1 Mbps) German sound mix surprised me a bit in its range. Sure, fidelity is of necessity limited for such early sound recording, but it doesn’t sound nearly as tinny as I was expecting. There is some hiss now and then and a good deal of noise and occasional flutter on the track which no amount of processing could eliminate. The Wolfgang Zeller music certainly adds authority to the “creepy factor” of the film, but the blending of the post synched dialogue, music, and sound effects has the abruptness typical of early sound recording.

Audio Commentary: the always wonderful Tony Rayns provides an excellent commentary track filled with fascinating information about the making of the movie and some incisive critical analysis of the film, too.

Carl Th. Dreyer (30:00, HD): a 1966 documentary by director Jorgen Roos which covers Carl Dreyer’s entire film career from 1920-1964 showing clips from the films and interview footage with the director compiled over the years but some made particularly for the documentary.

Video Essay (36:01, HD): film scholar Casper Tybjerg contributes a marvelous video essay on the various influences on Dreyer that helped him to create Vampyr. Included in this featurette are photos, film clips, and interview footage both audio and video (some from the previous documentary).

Radio Broadcast (23:31): 1958 radio broadcast in English by director Carl Dreyer concentrates on his ideas about what constitutes admirable qualities in film (one word: simplicity) and his opinion about the abuse of the use of color photography in movies. (His choice of the greatest color film: Japan’s Gates of Hell).

There has never been a suspense picture quite like Vampyr. More shuddery than scary, it does gain from multiple viewings especially once you put the pieces of its surreal storytelling together into some kind of sensible arrangement. For fans of early avant-garde filmmaking, it’s certainly worthy of a rental, and the entire package, a thorough update of Criterion’s 2008 DVD release, is a good bargain by Criterion standards. 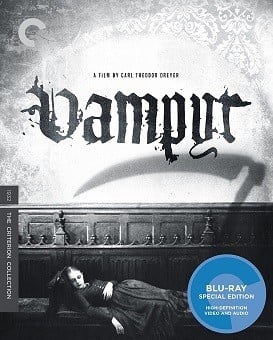