Forum List What's new Dark Style Change width
Log in Register
What's new Search
Menu
Log in
Register
Navigation
Install the app
More options
Dark Style
Close Menu
Posted on March 31, 2019 by t1g3r5fan
You are using an out of date browser. It may not display this or other websites correctly.
You should upgrade or use an alternative browser.
Final Bela Lugosi top billed studio film debuts on Blu-ray 3.5 Stars

Although he made a name for himself during the 1930’s as Dracula and for a few films he co-starred in with fellow master of horror Boris Karloff, by the 1940’s Bela Lugosi had already started to decline in the eyes of the major studios in Hollywood as a major star. However, 1943’s The Return of the Vampire represented a rare opportunity for him to take the lead in a studio picture compared to leading roles in Poverty Row films; it would be the last time he would do so in his career. Previously released on DVD by Columbia/TriStar, The Return of the Vampire debuts on Blu-ray from Shout Factory as part of their Scream Factory line.

At the end of World War I, the English countryside around London is plagued with mysterious cases of anemia, which is later attributed by Lady Jane Ainsley (Freida Inescort) and her colleague, Professor Walter Saunders (Gilbert Emery), to vampire activity in the area. Sure enough, a search of the local cemetery unearths the vampire’s crypt, which they promptly destroy and end the vampire’s curse, seemingly once and for all. However, years later during WWII, a bombing raid unveils the vampire’s coffin and a pair of civilians unknowingly remove the metal stake from the corpse. Now revived, the vampire – Armand Tesla (Bela Lugosi) – begins his nocturnal reign of terror anew by setting his sights on Lady Jane and her family, particularly her soon to be daughter-in-law Nikki Saunders (Nina Foch). It’s up to Lady Jane to destroy Tesla yet again and save Nikki from a fate worse than death…

Modestly made, The Return of the Vampire follows the traditional vampire movie formula, but adds a few new twists that separate it from previous efforts. First of all, the decision to have a female lead and hero that’s not in distress is remarkably refreshing not only for 1940’s cinema but for the genre in general. Second, the choice to acknowledge the horrors of war – albeit briefly – compared to the Universal Horrors of the time brings a small degree of reality compared to the more fantastic elements usually found in this type of movie. Finally, the addition of a werewolf into the formula not only helped to establish a crossover style in the genre, but set a template for future films to follow and examine further (the Underworld franchise of recent years certainly comes to mind). At just a little over an hour, director Lew Landers keeps things moving along briskly but the introduction of these new elements makes sure that the film does stand out when compared to previous entries in the genre.

In what would be considered his first true return to the vampire role that propelled him to stardom, Bela Lugosi brings effortless charisma and menace to the role; his performance further illustrates why he became synonymous with the role of Count Dracula both on film and on the stage. As the female lead and main hero of the film, Freida Inescort makes a very solid impression as Lady Jane Ainsley; the part gave her a rare chance to shine in a leading part in a career that mostly confined to character bits. Making her film debut here at the tender age of 19, Nina Foch is both luminous as well as suitably vulnerable as Nikki; shortly after this movie came out, she would play the first female werewolf in a feature length film – Cry of the Werewolf (1944). Matt Willis makes the most memorable impression of the supporting players as the tortured half-man, half-werewolf Andreas; it would be the most notable role of his brief career in film. Other notable appearances include Miles Mander as the skeptical Scotland Yard detective, Gilbert Emery as the professor who first destroys the villainous Tesla, Roland Varno as Lady Jane’s son and Nikki’s fiancee, and an uncredited Billy Bevan and Harold De Becker as the civilian defense workers who unwittingly revive the vampire by removing the spike from the corpse.

The film’s original 1:37:1 aspect ratio is preserved for this release. Film grain is sturdy and organic, while the density of it fluctuates from scene to scene, particularly noticeable in some night scenes. Fine details are rendered faithfully, and there’s a solid grayscale throughout; overall, this is an improvement over the old Columbia/TriStar DVD and likely represents the best the movie has looked on home video.

The original mono soundtrack is preserved on a DTS-HD Master Audio track for this release. Dialogue is clear and strong, with Mario Castelnuovo-Tedesco’s score given great fidelity and ambiance along with the sound mix; there’s very little in terms of age related issues – crackling, popping, hissing, distortion – making this the best the movie has ever sounded on home video and an improvement on the previous DVD.

Commentary by film historian Lee Gambin – The first of three newly recorded commentary tracks goes over some of the aspects of the production, particularly the werewolf angle compared to other films around the time of this film’s release.

Commentary by author/film historian Gary Don Rhodes – The second track might the most comprehensive of the bunch, as it goes over the movie from pre-production to filming.

Commentary by film historian Troy Howarth – The third and last track on the release focuses not only on the film, but on Bela Lugosi’s career in larger context.

Rare 8MM version (8:19) – Taken from a collector’s print courtesy of Don Cunningham, this rare version of the movie is presented without sound.

Still Gallery (5:15) – 71 images, consisting of production stills and promotional material, are presented with some of them provided by Brett Cameron.

Although it represented the last hurrah for Bela Lugosi as a leading man in major studio horror during Hollywood’s Golden Age, The Return of the Vampire is an effective little B-movie. Shout Factory can be commended for reviving the film with a solid Blu-ray release; not only does it earn high marks for both audio and visual quality, but the addition of 3 informative commentary tracks and a rare 8MM version of the film makes this release recommended for classic horror movie lovers.

Nice review. Just FYI - the reason the 8mm edition (8 minutes) is silent is because that is how Columbia Pictures Home Movies released it -- there was no corresponding edition that featured magnetic sound. Too bad these very nostalgic digest prints can't look as good on Blu-ray or DVD as they would if projected with a Super 8mm machine to the same dimensions as our home theater displays. Nice to have them, though.These seem to be popping up more and more and they're a fun special feature.
You must log in or register to reply here. 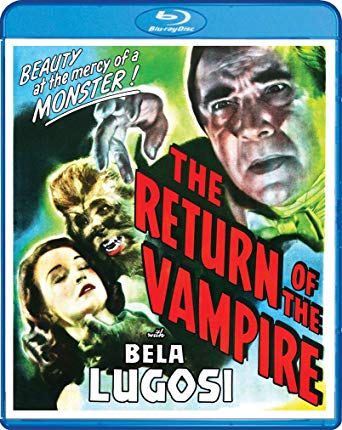