Forum List What's new Dark Style Change width
Log in Register
What's new Search
Menu
Log in
Register
Navigation
Install the app
More options
Dark Style
Close Menu
Posted on February 8, 2016 by Ken_McAlinden
You are using an out of date browser. It may not display this or other websites correctly.
You should upgrade or use an alternative browser.
Pleasant, but a bit of a missed opportunity. 3 Stars

Director Nancy Meyers has had great success with films depicting mature relationships such as Something’s Gotta Give and It’s Complicated, with the occasional foray into films about younger protagonists such as The Holiday.  With The Intern, she spans the generations by building a film around the professional relationship between an “unretired” businessman who accepts a “senior internship” at an internet fashion retail start-up and the group of millennials comprising most of the rest of the company’s workforce.

In Nancy Meyers’ The Intern, Robert Deniro plays Ben Whittaker, a 70 year old widower reckoning with retirement.  Feeling somewhat unfulfilled, he applies for a “Senior Intern” position at a start-up company that sells fashion via the internet.  Ben not only gets the job, but finds himself assigned to the company’s hard driving and overworked founder Jules Ostin (Hathaway).  In the midst of professional turmoil as investors are pushing her to hire a CEO to manage her rapidly growing company. At first, Jules has no time for Ben and seeks to pawn him off elsewhere, but a mutual admiration begins to develop between them as they face new professional and personal challenges.

The Intern has a topical and potentially intriguing premise that touches on subjects such as work-life balance, professional implications of an aging US population, double standards applied to female executives, and myriad others.  The film’s plot takes steps in the direction of tangling with many of these, but never seems to fully commit.  The climax of the film is handed over substantially to the resolution of a domestic dispute that is arguably the least interesting of the various plot threads woven throughout the film’s two hour running time.  The novelty of the film is largely its focus on a unique professional relationship.  The inability of the screenwriter to mine this relationship for drama (or possibly the lack of confidence that audiences would be satisfied without the drama surrounding a more conventional romantic relationship) makes the film seem like a missed opportunity.

While the film does not quite live up to the potential of its premise, it does nearly get by on the charm of its lead actors.  Robert De Niro and Anne Hathaway are too good as actors and too charismatic as movie stars to not be watchable in their scenes together.  They make good choices within the machinations of the somewhat uneven plot progression resulting in a decent through-line in their relationship that peaks while there is still too much time left in the movie.

The film is also very easy on the eyes due to the impeccable production design and fantastic and purposeful use of color that are trademarks of all of Director Nancy Meyers’ films.  It was all the more striking when thrown into contrast against the trailer for the movie “Pan” that appears when this disc is first inserted into a Blu-ray player where the design and color approach seem devoid of any taste and meaning.

The film is presented via an AVC encoded 1080p presentation which approximates its original theatrical aspect ratio by filling the full 16:9 frame. The presentation is generally outstanding, particularly in its rendering of the aforementioned meticulously chosen colors. Sharpness and detail are near perfect, betrayed only by a few brief highly detailed exterior shots with moving camera where a slight shimmer appears around object like leaves on trees. One has to really be scrutinizing the frame to notice these minor artifacts.

The DTS HD 5.1 track serves the dialog heavy film well with surrounds used sparingly for music and ambient effects. The mix does a nice job of increasing the ambient immersive surround effects when the action takes characters outdoors without drawing undue attention to itself. Fidelity is outstanding with the film’s score being the primary beneficiary of the lossless encoding.

When the Blu-ray disc is first played, the viewer is greeted with the following skippable promos:

Proper special features accessible from the disc menu consist of three featurettes cut from the “electronic press kit” cloth with actors and filmmakers offering comments usually recorded on or near the production’s sets or offices.

Designs on Life (5:46) is the most interesting behind the scenes feature focusing on the various design elements of the film with discussion of Meyers’ visual design philosophy and how it is realized across sets, props, costumes, and other elements. On-camera comments are provided by Meyers, Set Decorator Susan Bode, Production Designer/Set Decorator Beth Rubino, Production Designer Kristi Zea, Producer Suzanne Farwell, Costume Designer Jacqueline Demeterio, Anders Holm (“Matt”), Hathaway, DeNiro, Russo, and DeVine.

The Three Interns (5:46) is a very slight featurette in which DeVine, Orley, and Pearlman talk about each other, their characters, and the on-set experience making the film.

SD DVD This two-disc combo pack also comes with an SD DVD that presents the film in 16:9 enhanced standard definition video with Dolby Digital 5.1 Audio in English, English DVS, French, and Spanish.  Available subtitles are English SDH, French, and Spanish.  The only special feature is the Learning from Experience featurette that also appears on the Blu-ray disc.  When the DVD is first played, the viewer is greeted with the following skippable promos:

Nancy Meyers’ The Intern features a timely premise, a charming cast, and the director’s usual impeccable visual taste, but it comes up short of doing justice to its central idea of exploring an unusual professional relationship. Anne Hathaway, Robert DeNiro, and a supporting cast filled with comedic ringers make it a watchable misfire, but a misfire nonetheless. It is presented on Blu-ray disc with outstanding audio and video and a modest trio of featurettes more promotional than informative.

The Amazon link at the review showing a $14.99 price is inaccurate. 'The Intern' is $10 at Amazon at this moment in time (it may change by the time you read this).

Mark Booth said:
The Amazon link at the review showing a $14.99 price is inaccurate. 'The Intern' is $10 at Amazon at this moment in time (it may change by the time you read this).

Thanks Mark! Just ordered. One of the best films I have seen in a long time.
Last edited: Feb 9, 2016

A big fan of this as well. My wife and I saw it a couple of weeks ago on PPV and both loved it (we both love most of Nancy Meyer's films). As soon as it was over, I ordered the BD and we've passed it around already to several family members who have really enjoyed it as well.

Mark Booth said:
The Amazon link at the review showing a $14.99 price is inaccurate. 'The Intern' is $10 at Amazon at this moment in time (it may change by the time you read this).

Yeah, I got bitten by buying this title earlier this week for $14.99
You must log in or register to reply here. 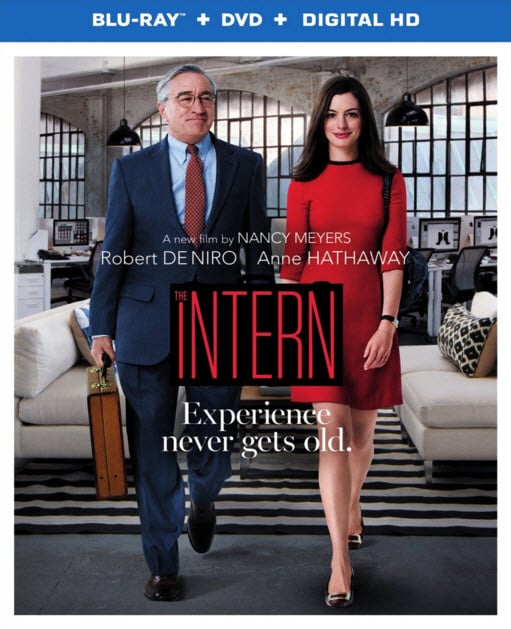