By the mid 1960’s, Polish director Roman Polanski was beginning to make a name for himself on the international film scene with critical successes like Knife in the Water (1962) and Repulsion (1965). Made right on the verge of his breakthrough film – Rosemary’s Baby (1968) – The Fearless Vampire Killers pays homage to the classic vampire movies while serving up some humor as well. Previously released on DVD by Warner Bros., the company has given the movie its Blu-ray debut through their Warner Archive Collection line.

In a remote Transylvanian mountain village, noted but doddering vampire expert Professor Abronsius (Jack MacGowran) and his bungling assistant Alfred (Roman Polanski) arrive to seek out an destroy the vampiric influence in the area. The mission takes on a personal angle when Sarah (Sharon Tate), the daughter of the local innkeeper and a budding love interest of Alfred, is abducted by Count von Krolock (Ferdy Mayne) and taken to his castle. The professor and Alfred set off to both rescue Sarah and end the Count once and for all, and it all leads up to a fantastic ball where the guests have plans to make Sarah one of them!

In comparison to much of his best known works, Roman Polanski’s The Fearless Vampire Killers can be seen as a lighter and humorous look into the darkness. There’s certainly an almost fairy tale quality to the story, but that too is given a comedic twist as well. The story also stays true to many of the conventions of previous vampire movies while serving up a comedic spin on them as well; the film is also very beautifully designed (the production values can hold their own with many of the Hammer films of the time) and staged as well – the climatic ball sequence is a testament to that. While it was released here in the United States in a truncated version in its initial run, The Fearless Vampire Killers has been reappraised over the years as a great blend of horror and satire and has earned belated praise that was first elusive, like the vampires our heroes try to slay.

In addition to writing and directing the film, Roman Polanski also takes on the lead as the well meaning but bumbling Alfred; it’s one of the two best acting roles he’s had in his own films (The Tenant being the other). Character actor Jack MacGowran also gets the chance to take the lead as well as the aging and doddering vampire expert; it was a notable role for him – in the original US release, his voice was dubbed to make his character more kooky. The lovely Sharon Tate is also given one of her best roles as the innkeeper’s daughter who’s also the object of affection for both Alfred and the Count; Tate and Polanski were married shortly after the film was completed and their marriage would become famous for the wrong reasons we now know all too well. Also worth mentioning are Ferdy Mayne as the nefarious Count (and film’s narrator), Alfie Bass as the village innkeeper, Terry Downes as the hunchbacked servant of the Count, Fiona Lewis as the maid and object of the innkeeper’s affection, Ronald Lacey as the village idiot, Iain Quarrier as the Count’s foppish son (his voice dubbed by Vladek Sheybal), Jessie Robins as the innkeeper’s wife, and Sydney Bromley as the sleigh driver at the beginning of the film.

The complete 107 minute version of the movie is presented in its original 2:35:1 aspect ratio for this release, which features a brand new HD transfer. Film grain is organic throughout with the color palette extremely vivid and fine details strongly and faithfully rendered. There next to no instances of print damage and issues like scratches, tears, dirt or dust present, which means that this transfer of the movie is the best the movie will ever look on home video and blows the previous DVD out of the water in this regard.

The film’s original mono soundtrack is presented on a DTS-HD Master Audio track for this release. Dialogue is strong and clear throughout with the sound effects and Krzysztof Komeda’s effectively brooding score both given great clarity and fidelity without intruding upon each other. Any instance of issues related with the soundtrack (crackling, hissing, distortion, etc.) are either very minimal to nonexistent, which makes this release another improvement over the previous DVD and the best the movie will ever sound on home video.

Vampires 101 (10:21) – Carried over from the Warner DVD, this brief promo tied to the release of the movie humorously illustrates details on the vampire and how to guard yourself from one.

Alternate Title Sequence (4:01) – The alternate title sequence from the truncated US release of the movie is presented here.

While it didn’t really find an audience upon first release, The Fearless Vampire Killers has been resurrected over the years as a great send up on the vampire genre and as one of Roman Polanski’s most overlooked and underrated films. Warner Archive should be highly commended for this Blu-ray release, which gives the film its best presentation on home video and easily surpasses the old Warner DVD. Very highly recommended.

A thoroughly fun and well-done movie. And Sharon Tate is beautiful.

One of my favorite popcorn matinee movies I saw as a kid- both scary, sexy and hilarious. Perfectly cast and a fantastic score. I only wish it included the pro final US version which is what I most likely saw though I think when first shown on TV t it had the Jack Macgowan voiced version but I’m sure censored but I kind of remember it being shown late on CBS.
Expand signature
RIP Ziegfeld and Paris Theaters NYC

Great review. Thanks. Love this film and the fantastic blu-ray.
Expand signature
My Blu-ray / DVD Collection 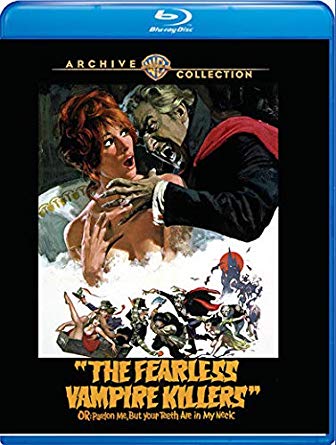