Posted on May 24, 2019 by Matt Hough
Hilarious and heartrending comedy-drama still ranks among the best 4 Stars

Robert Harling’s loving remembrance of his late sister’s life and death forms the basis of his hit play Steel Magnolias and its very successful 1989 film version directed by Herbert Ross. Filled with assorted comic and dramatic moments in the lives of six female friends living and loving together in a Louisiana parish, Steel Magnolias is a touching and funny slice of life and a sure cure for what ails you.

The title symbols in Steel Magnolias refer to its six protagonists, a sextet of sometimes hard-edged, determined Southern women who make a memorable team of individuals at work and play in Chinquapin, Louisiana. But tough Southern women aren’t new to movies. Shirley MacLaine, for example, who here plays the feisty town curmudgeon named Ouiser, played a similarly resolute Southern belle in Terms of Endearment (which this movie definitely resembles in spots). These women are all cherishable ladies a couple of generations removed from Tennessee Williams’ suffering females and with more on the ball than Truman Capote’s eccentric creations.

Besides MacLaine (who steals every scene she’s in and emerges as the feistiest of the grand dames), there are Sally Field and Julia Roberts playing M’Lynn and Shelby, mother-daughter adversaries locked on a loving collision course, Dolly Parton and Daryl Hannah as friendly beauty shop owner Truvy and her daffy, insecure new assistant Annelle, and Olympia Dukakis as Clairee Belcher, the resident town wit who makes acerbic observations about the inhabitants of the entire parish throughout the picture.

Robert Harling’s stage play and his adapted screenplay have some general allusions to Clare Booth Luce’s The Women in its insights into human nature in general and women in particular. In Luce’s comedy, though, the accent was on women using sex as the lethal weapon in the eternal conquest of men. Harling’s story is less obvious, less structured, and less catty (though still plenty bitchy at times), seeing the women as individuals struggling for life’s rewards rather than simply as kept objects of men. In fact, much is made of the women’s independence from their men, hardly the thesis of Luce’s play and much more appropriate for modern women and today’s audiences. Unlike Terms of Endearment, however, Steel Magnolias is noticeably episodic in the six stories it’s trying to tell, and splitting its time between these powerhouse ladies lessens a little some potentially dynamic scenes through such a necessity for its split viewpoints. It’s, however, a true embarrassment of riches, especially in the stories of MacLaine, Parton, and Field.

Performance-wise, each woman has her moments, Sally Field’s being the most intensely dramatic, and they all rise to the occasion whenever their spotlight moments occur. Dolly Parton’s natural buoyancy and verve is totally captivating making any other actress in this part unthinkable. Olympia Dukakis’s dry delivery robs her of some of the sympathy of the other characters, but she still has a few unmatched moments. Hannah is as good as she’s likely ever to be, and Roberts makes a beautiful, fresh-faced ingénue and the only one of the sextet of powerhouse actresses to emerge from the movie with a Golden Globe award and an Oscar nomination to show for her trouble. While some of their Southern accents prove occasionally elusive (particularly Field’s), one harbors no ill will for the infrequent lapses. The ladies are far too likeable and appealing for that.

Director Herbert Ross, used to handling women’s stories in such previous movies as The Turning Point and Funny Lady, focuses on the women’s faces, and etched there are the laughter and tears that everyday life is comprised of. He gets the film off to a grand start as we pop in and out of the sights and sounds of these Southern folks on the day of Shelby’s wedding, and he handles a dramatic diabetic episode in the beauty shop with real grace and candor. The big reveal of the tacky church decorations in Shelby’s pink monstrosity of a wedding, the wedding reception with folks dancing up a storm, and a graveside sequence where a mother expresses her disbelief over the vagaries of life are also right on the mark.

In his opening up of his all-female stage play, writer Harling along with director Ross has offered here a few men who make sporadic appearances in the film. Tom Skerritt has a funny moment or two as Field’s wacky husband, and Sam Shepard pops in from time to time as Parton’s unemotional but occasionally thoughtful spouse. Dylan McDermott, Kevin O’Connor, and Bill McCutcheon also score in scenes with the various ladies, while never fully securing the spotlight from them. It’s really the ladies’ story, unquestionably. The movie opens out many of the memorable scenes from Harling’s dramedy and plays much better as a film actually (in much the same way that Driving Miss Daisy, also opened up from play to film in 1989, did). How much of that has to do with Ross’s snappy pacing, the intelligent and striking performances, and the lovely location photography, though, rests with each individual’s interpretation. It’s certainly a very gratifying two hours.

The film’s theatrical aspect ratio of 1.85:1 is faithfully rendered in 1080p resolution using the AVC codec. Using the same transfer that Twilight Time used in their 2014 Blu-ray release now out-of-print, the image is bright, colorful, and devoid of any age-related problems. Hues and saturation are nicely balanced and appealing, and contrast has been dialed in to perfection.

The DTS-HD Master Audio 5.1 sound mix offers a solid, reliable aural presentation. The all-important dialogue is clearly and cleanly presented in the center channel, and the surrounds are filled with occasional ambient sound effects and Georges Delerue’s lovely background score. There are no problems with hiss, flutter, crackle, or pops.

The disc offers some of the same contents of the 2000 DVD release:

Audio Commentary: director Herbert Ross delivers a somewhat dry and unemotional commentary on the film, offering some insights into his casting and production decisions but also featuring numerous gaps in the commentary and too much description of what’s on the screen.

Deleted Scenes (6:04, SD): ten brief scenes which can be watched separately or together in one montage.

Steel Magnolias remains a beautifully realized film version of a one-set hit play with an all-star cast giving their all in telling its episodic story. While it’s wonderful that Sony has made the film available once again in high definition after the sellout of the Twilight Time edition, it’s a shame no new bonus material was collated since many of its principal cast members are still with us. Nevertheless, recommended! 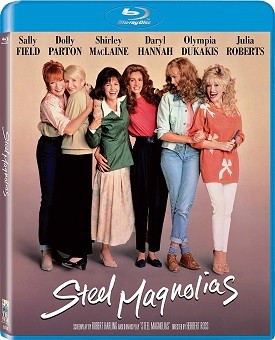