JJ Abrams brings the Skywalker Saga to a close with Star Wars: The Rise of Skywalker, aka Episode IX.

Emperor Palpatine (Ian McDiarmid) is alive and not exactly well, living in seclusion on the uncharted planet Exegol, preparing a new army to launch what he is calling The Final Order, in hopes of obliterating all free worlds. Poe (Oscar Isaac), Finn (John Boyega), and Chewbacca (Joonas Suotamo) have received a transmission aboard the Millennium Falcon from a First Order mole warning them of the danger and that they need to find passage to Exegol to stop Palpatine as soon as possible. Meanwhile Rey (Daisy Ridley) has been continuing her Jedi training under the tutelage of Leia (Carrie Fischer, using outtakes from The Force Awakens) as Kylo Ren, aka Ben Solo (Adam Driver), continues his assault on the free world taking down rebels one by one with his light saber. Rey, Poe, Finn, Chewbacca, and C-3PO (Anthony Daniels) head out in search of a GPS (for lack of a better Star Wars term) that will lead them to Exegol, with Kylo Ren hot on their tail. But Ren also knows the true secret to Rey’s lineage, and hopes to use it to turn Rey once and for all.

Star Wars: The Rise of Skywalker, the ninth and final “episode” in the Skywalker Saga brings back director JJ Abrams, who helmed the popular seventh episode, The Force Awakens, and uses the nostalgia factor favorably, as he did in his previous outing. Like that seventh film, Rise of Skywalker has a familiarity to it, although not quite to the extent where we fell like we’ve seen most of this story before. In other words, while Force Awakens quite often felt like a rehash of A New Hope, Rise of Skywalker never feels like a remake of Return of the Jedi (thank goodness!), although we do return to the Moon of Endor eventually and even Ewok Wicket (Warwick Davis) and his son Pommet (Warwick’s son Harrison) get a brief cameo. Some have called Rise of Skywalker a course correction attempting to polarize the divisiveness caused by Rian Johnson’s The Last Jedi, and Rise of Skywalker succeeds more than it fails in doing that without turning the knife too far in Last Jedi’s side (the Disney+ series The Mandalorian was much more successful in polarizing the fan base), although Rise of Skywalker rarely if ever takes any real risks. Where would I rate Rise of Skywalker among the nine film saga (plus the two stand alone’s)?

Star Wars: The Rise of Skywalker was shot on 35mm film with certain IMAX sequences shot on 65mm film, and then completed as a 4K digital intermediate in the 2.39:1 theatrical aspect ratio with Dolby Vision HDR for some of its premium theatrical engagements. Disney’s HEVC-encoded 2160p transfer uses HDR10 high dynamic range for this UHD disc release. This disc impresses with its deep blacks from the get go during the opening text crawl, providing a black background with pinpoints of bright stars compared to a dark grey on the included Blu-ray). This continues throughout, providing excellent shadow detail during the night time scenes on Kijimi. Whites are bright and crisp while never blowing out detail in the image, as evidenced in the laser duel in Kylo Ren’s sterile white quarters. Colors are bold and vivid, providing excellent and natural gradations in tones while also helping to reveal minor imperfections such as wear and tear on droids and ships. Detail gets a nice boost compared to the included Blu-ray, with noticeably more defined textures and a light layer of film grain.

When played at near reference levels, the default Dolby Atmos track is a real treat. The soundstage here is wide and deep, utilizing every speaker in your set-up and providing fluid movement of sounds. Ships and laser blasts zoom overhead, TIE fighters and speeders whizz by you, John Williams score envelopes you, all the while dialogue is well-prioritized, clear and understandable throughout. LFE is strong where needed, from Palpatines footsteps to laser blasts to all-out explosions. Your mileage may vary as you decrease your master volume.

The Skywalker Legacy (1080p; 126:11): The big highlight of this set is the two-plus hour documentary on the making of The Rise of Skywalker, intercutting with similar incidents (using archival footage and interviews) from the original trilogy.

Pasaana Pursuit: Creating the Speeder Chase (1080p; 14:16): An informative look at the speeder chase though the Pasaana desert.

Warwick & Son (1080p; 5:37): Warwick Davis and his son are fitted for new Ewok costumes as they prepare for their cameo in the film.

The Maestro’s Finale (1080p; 11:00): John Williams conducts his last (?) score for a Star Wars movie. Available on most digital retailers.

Legacy (1080p; 3:13): An EPK piece on the making of the movie, almost an extended trailer of sorts for The Skywalker Legacy. Vudu exclusive.

Star Wars: The Rise of Skywalker is a satisfying conclusion that doesn’t take too many risks. Disney’s presentation on UHD disc is excellent.

Love the film and can’t wait to pick it up.

trying to decide on Disney movie club or Barnes and nobles.
The target exclusive disc is tempting too....
Reactions: PMF

Am going to pick this up in the Skywalker UHD set to add to my collection. Will need to add Rogue One by itself on 4K UHD. These titles will join many other titles as the last time I will be buying them. Only UHD title scheduled for repurchase is Terminator 2! Thanks for the review, Todd. I have not seen this one yet. Hopefully the price will drop around the holidays so I can complete my saga collection - - I own episodes 1-7 on BD and episode 8 on UHD. In the meantime, I will watch it initially on Disney+ when it hits that service.
Reactions: Osato

Am I correct in assuming this will not be available in 3D anywhere? Also, what is on the target disc that would make me want to get it there?

Edit: Nevermind, it is available in 3D from Amazon UK. Question for Target still stands.

This proposes a conundrum for me. 3D or Atmos? I shouldn’t have to choose, but it will be necessary.
Last edited: Mar 31, 2020

I found a pic of the back of the 3D box. it shows DTS:HD MA 7.1. I think that will sound fine on my atmos system, so I’m sticking with 3D.

Yeah. But I'm easier to please than many others when it comes to the SW films.
Reactions: Scott Merryfield, Craig_Ehr, TravisR and 1 other person

Mike Frezon said:
Yeah. But I'm easier to please than many others when it comes to the SW films.
Click to expand...

You can say that again.

Funny thing. As I was posting here, UPS delivered my 4k version of Rise of Skywalker from Target.

The artwork on the cardboard sleeve is much nicer than what's on the case artwork.
Reactions: Osato

Another eBay 3D buy next month when it comes out.

For those interested in the “Target bonus” it’s a cool and informative 25 minute behind the scenes...

So moderate your expectations. I will say my Oppo 203 to Sony 900F did a respectable job in the upscale. But yeah. DVD.
Reactions: Osato, TravisR and holtge

Carlo Medina said:
For those interested in the “Target bonus” it’s a cool and informative 25 minute behind the scenes...

So moderate your expectations. I will say my Oppo 203 to Sony 900F did a respectable job in the upscale. But yeah. DVD.
Click to expand...

The little booklet is nice, so that kept me from feeling like I literally set fire to a five dollar bill.

But honestly, not many of these were made, and the difference of burning a dvd vs bd at this point is pennies. And you know the documentary stuff was natively shot 1080p so...#stilldisappointed
Reactions: Osato, Johnny Angell and holtge

Well not including the unlikely release of the original trilogy theatricals hitting 4K Blu-ray and the addition of new Star Wars titles in the future. Now that I have all current Star Wars titles on 4K Blu-ray this is finally the last time I feel the need to purchase any of these titles! I am glad to have picked up the Skywalker Saga and the individual Rouge One all on 4K UHD Bluray! I think there is a possibility I kinda like this franchise? I like the printed photos on the pages but the discs are a total pain to get out, who in the world approved this design?
Reactions: Osato

Dave Moritz said:
I like the printed photos on the pages but the discs are a total pain to get out, who in the world approved this design?
Click to expand... 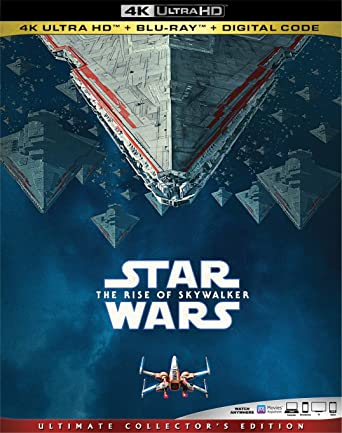