Forum List What's new Dark Style Change width
Log in Register
What's new Search
Menu
Log in
Register
Navigation
Install the app
More options
Dark Style
Close Menu
Posted on February 9, 2021 by Matt Hough
You are using an out of date browser. It may not display this or other websites correctly.
You should upgrade or use an alternative browser.
Excellent, perceptive documentary on the life and career of a revered artist. 4 Stars

James Lapine’s Six by Sondheim is an entertaining documentary offering first-timers some insight into the identity of America’s most revered living composer and collecting for purists some treasurable interviews and performances of some of his most celebrated work.

Stephen Sondheim, the dean of American musical-theater composer-lyricists, has been fortunate to have been interviewed throughout his noteworthy career, and we’re even luckier that he is both intelligent and articulate, able to summon at will his thoughts about fashioning words and music tightly into a musical libretto so that the process flows effortlessly from dialogue to songs in a way unmatched by composers of his own or previous generations (though he freely gives credit to his forefathers in tributes to Jerome Kern, Cole Porter, and Oscar Hammerstein II). Now 90, the composer and his comments contained in the 2013 HBO documentary Six by Sondheim have been collected from seven decades of interviews on everything from Camera One to The Mike Douglas Show to 60 Minutes. In them, we not only get a clear picture of the man’s life and times, but we hear about the creation of some of his classic works (but not all; sadly, the documentary only has time to touch on highlights and not cover the breadth of the man’s significant creative output) and have some of the songs contained in them sung either all or in part by such legendary stage performers as Barbra Streisand, Angela Lansbury, Ethel Merman, Bernadette Peters, Mandy Patinkin, and more current performers such as Audra McDonald, Darren Criss, and Laura Osnes.

Sondheim has selected six songs of his which he feels constitute major ramparts in his career, songs which parallel his own life or express his philosophy of living or working in show business. Some are performed by the actors who made them famous; others are more newly mounted to show how timeless his work can be in a modern setting. All are among the greatest show tunes ever written. He begins with “Something’s Coming” from West Side Story. Though he’s not proud of many of his lyrics in his first Broadway show, “Something’s Coming” constitutes something of which he is proud: words that correspond to his own ambitious striving for success in an unpredictable world. As illustrated in the show’s star Larry Kert’s driving rendition, the longing for that intangible goal around the next corner keeps the character (and Sondheim himself at that young stage of his career) moving ever-forward to see what’s next. A young artist’s striving for success also marks the song “Opening Doors” from Merrily We Roll Along which is presented in two parts as three young show business hopefuls (played by Darren Criss, America Ferrera, and Jeremy Jordan suggesting Sondheim, Hal Prince and Mary Rodgers in their early years trying to make it on Broadway) work temp jobs during the day while writing their book, music, and lyrics at night and audition for an unimpressed producer (played by Sondheim himself) while not giving up their dreams. James Lapine directs these sequences (as well as the rest of the documentary apart from two numbers) with all the fervor and flavor of youthful exuberance both eager and impatient for their big break.

Sondheim’s biggest Grammy-winning hit song from one of his shows “Send in the Clowns” gets a fair amount of screen time as we’re first told the story of its origins and then treated to a montage of the famous singers who have tackled the number (from originator Glynis Johns through Judy Collins, Frank Sinatra, Barbra Streisand, Bernadette Peters, Patti LaBelle, Cher, Carol Burnett, and Glenn Close, to name but a few). Director Autumn de Wilde then stages six-time Tony winner Audra McDonald (accompanied by her husband Will Swenson) singing the new refrain added to the song for Streisand’s The Broadway Album in a moody, effectively fresh rendition of the familiar tune.

The documentary has a couple of missteps. In attempting to illustrate Sondheim’s references to the influences of Cole Porter and Oscar Hammerstein in his own writing, clips from the film Can-Can (Porter) and the London theatrical revival of Oklahoma! (Rodgers-Hammerstein) are shown, interrupting Sondheim’s precise musical palette with writers possessing far different melodic and lyrical sensibilities. Even worse, though, is the treatment afforded to one of his most triumphant songs of determination and plucky longevity “I’m Still Here.” Though we appreciate the story of its origins as a replacement for the frivolous “Can That Boy Foxtrot!” in the Follies out-of-town tryouts (and even get Sondheim warbling the first few lines of that novelty song), we only get a snatch of originator Yvonne De Carlo’s singing her career high point number. It’s followed by a deathly Todd Haynes-directed nightclub sequence as young crooner Jarvis Cocker talk-sings his way through the song while women of advancing ages look on in astonishment. A dynamic song of much greatness deserves a classier rendition than this tuneless New Age interpretation.

But some of the best has been saved for last. In discussing his romantic life, Sondheim has chosen “Being Alive” from Company to illustrate his long-time search for a partner, and the rendition we get of the song is lifted from the masterful D.A. Pennebaker documentary Company: Original Cast Album where Dean Jones offers a chills-down-the-spine rendition of a man spilling his guts in expressing his readiness to accept love in his heart. And with the original Broadway cast of Sunday in the Park with George comes the first act closer “Sunday” which offers an artist’s expression of his raison d’être bringing the documentary to a most satisfying end.

The production is presented in its widescreen television aspect ratio of 1.78:1 and is offered in 1080p resolution using the AVC codec. Since the songs and interviews are culled from varying sources including ancient kinescopes, videotape, film, and digital photography, video quality is variable though everything has been cleaned up to as presentable condition as possible. The new musical sequences filmed for the piece have excellent sharpness, accurate color, and impressive contrast making for a first-rate impression. The documentary has been divided into 15 chapters. (There is a chapter listing in the main menu if you want to skip to a specific song or sequence.)

The DTS-HD Master Audio 5.1 sound mix offers the best possible musical dynamics given the patchwork nature of the documentary. The older clips from kinescopes like “Something’s Coming” lack bass and resonance, but the new footage all comes across with acute aural fidelity, and even some of the clips as “Being Alive” and “Sunday” offer nice stereophonic spread across the soundstage. Again, all of the vault footage has been cleaned up to rid it of hiss, crackle, pops, or flutter.

There are no bonuses of any kind offered with this documentary, a bit of a disappointment for those hoping some behind-the-scenes views of the new material being prepared might have added to fans’ interest in all things Sondheim.

Winner of the George Foster Peabody Award for excellence in television, James Lapine’s Six by Sondheim is an entertaining documentary offering first-timers some insight into the identity of America’s most revered living composer and collecting for purists some treasurable interviews and performances of some of his most celebrated work. Highly recommended!

Thanks for this, Matt.

This title is also streaming on HBO Max.

I might end up with the disc eventually, but since it is on HBO Max and I have access to it, a barebones disc isn't a huge priority for me at this time.

There is a short clip from the film "Gigi" in my screener of this, but not "Can-Can". Has the "Gigi" clip with Hermione Gingold and Maurice Chevalier been substituted with one from "Can-Can" in the new blu ray?

Don't know why a Gigi clip would be included. He never discusses Lerner and Loewe. He does discuss Cole Porter and Louis Jordan and Maurice Chevalier from Can-Can is shown.

Matt Hough said:
Don't know why a Gigi clip would be included. He never discusses Lerner and Loewe. He does discuss Cole Porter and Louis Jordan and Maurice Chevalier from Can-Can is shown.
Click to expand...

My mistake. It was, of course, Can-Can.
You must log in or register to reply here. 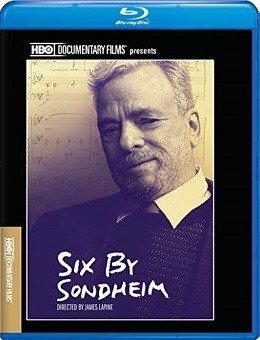