A rather obvious and predictable ghost story 2.5 Stars

A horror tale with regulatory hooks that get transgressed, Johannes Roberts’ The Other Side of the Door covers very familiar and much-trod territory without offering anything freshly minted or unusual.

A horror tale with regulatory hooks that get transgressed, Johannes Roberts’ The Other Side of the Door covers very familiar and much-trod territory without offering anything freshly minted or unusual. Yes, there are a few blatant shocks that can work with an audience, but the storytelling is messy and unsatisfying, and most of the adults seem thick-headed and irritating, ridiculously surprised when things go so wrong or cluelessly in the dark with all manner of evidence around them to suggest something’s nastily afoot.

Devastated when she must let her older child Oliver (Logan Creran) drown during a car accident in order to save younger child Lucy (Sofia Rosinsky), Maria (Sarah Wayne Callies) is ready to take her own life and join her lost child in the afterlife when her servant Piki (Suchitra Pillai) offers her an ancient East Indian ritual for having a final communication with her dead child: scattering his ashes on the steps of an ancient temple and hiding behind a locked door when her child’s ghost is resurrected. She’s warned not to open the door for any reason during their reunion, but, of course, Maria can’t help herself to catch a final glimpse of her child when he tells her he’s leaving. Afterward, it seems his ghost returns to the family home in Mumbai and begins a series of increasingly malevolent acts designed to reinsert himself back into family life at the expense of anyone who tries to stop him.

Stories involving ritualistic magic rules which can’t be transgressed cover the gauntlet from Gremlins to Pet Semetary, and director Johannes Roberts and Ernest Riera’s screenplay is no different: we hear the rules that must be followed for the child’s spirit to reappear from the grave and know before anything actually happens that the distraught mother will never be able to obey them (she can’t even stay in the designated spot inside the temple; she wanders around foolishly courting disaster though her snooping does allow us access to seeing statues of some of the horrifying goblins which will later plague the family). Why is she so surprised, then, when the family dog begins acting peculiarly or her dead son’s favorite stuffed tiger returns from the grave with him? And naturally she doesn’t share anything with her husband (Jeremy Sisto) so that all of these weird events happening around him, everything from strange sounds emanating from the dead son’s upstairs bedroom, the deaths of all of the property’s growing things and pets (fish and birds; for some reason, the dog is spared so he can continue to growl throughout the film), and these strange mystics getting in his face around town, can perplex and confound him. Director Roberts is fond of a particular kind of “boo” moment: characters turning around only to find someone startling an inch away from them punctuated by a deafening music screech on the soundtrack (how they crept up without being heard is never dealt with). On the other hand, he’s pretty circumspect when dealing directly with death. Several characters mercifully die off camera though, to spice up the climax, there’s a fair share of blood spilled to get to an ending that won’t take many by surprise, and the movie’s final scene seems hastily thrown together to bring the movie full circle..

Sarah Wayne Callies is practically the whole show as Maria, distraught and suicidal over her loss (even with a husband and another child who love and need her) and then running the gamut from exhilaration over communicating with her son and the thoughts that his resurrected spirit might linger peacefully within the house to the dreaded realization that her living family is in grave danger from the ghost of her malicious child. Suchitra Pillai is creepy and foreboding as the house servant who offers the mother solace with some bitter strings attached. Jeremy Sisto does what he can with the loving husband who isn’t clued in until very late into the film about what’s going on, only to typically discount what he’s being told until it’s too late to reverse his reasoned responses. Sofia Rosinsky as the innocent daughter is fine though occasionally she seems a bit too knowing for a four-year old.

The film is presented in its theatrical aspect ratio of 2.39:1 and is offered in 1080p resolution using the AVC codec. Sharpness isn’t razor-edged throughout though at its best, it’s quite detailed and immersive. Color saturation levels are solid without being overdone, and skin tones are accurate and appealing. Black levels don’t reach the deepest possible levels, but they are more than adequate. Contrast has been well sustained making for an involving visual experience. The movie has been divided into 24 chapters.

The DTS-HD Master Audio 5.1 sound mix is the transfer’s strong point, a brilliant use of the available channels through which to filter the wonderfully designed atmospheric effects that place voices, natural sounds, and odd thumps and bumps to draw in the audience and keep them continuously unsettled. The sparse music by Baxter is likewise given surround treatment in the fronts and rears. Dialogue has been well recorded and falls mostly into the center channel with wise placement in the surrounds for the ghostly communication from the undead.

Deleted Scenes (7:41, HD): six scenes may be watched individually or in montage.

Behind the Door (1:55, HD): a very brief EPK vignette featuring producer Alexandre Aja describing the plot of the film.

Still Gallery: twenty-six color stills and behind-the-scenes shots which may be automatically or manually advanced.

DVD/Digital Copy/Ultraviolet: disc and code sheet enclosed in the case

The Other Side of the Door is a somewhat bland and predictable horror film, lacking the incessant gore for the splatter crowd and lacking freshness and sophistication for those who yearn for a truly classy ghost story. For horror fans, a rental will likely suffice if you’re curious. 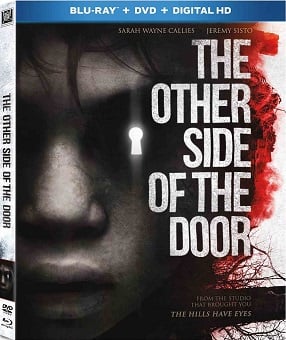