Forum List What's new Dark Style Change width
Log in Register
What's new Search
Menu
Log in
Register
Navigation
Install the app
More options
Dark Style
Close Menu
Posted on June 8, 2016 by Todd Erwin
You are using an out of date browser. It may not display this or other websites correctly.
You should upgrade or use an alternative browser.
A sequel that has aged well. 4 Stars

Five years after the first film was released, Ghostbusters II was unleashed in yet another crowded summer season in 1989, having to compete with Indiana Jones and the Last Crusade, Lethal Weapon 2, and Tim Burton’s Batman. Anticipation ran high on this sequel, so high that when it arrived in theaters, it was met with disappointment by the general public, and long thought to have killed off the franchise that could have been.

Five years after the events in the first film, the Ghostbusters have disbanded, forced out of business by lawsuits from just about every government agency at every level, trying to recoup for the damages caused by Gozer, and slapped with a restraining order forbidding them to capture ghosts. Egan Spengler (Harold Ramis) has moved back on campus at Columbia University, conducting psychological experiments at the Institute for Advanced Theoretical Research. Ray Stantz (Dan Aykroyd) has opened an occult bookstore. Peter Venkman (Bill Murray) hosts a local talk show called World of the Psychic. And Dana Barrett (Sigourney Weaver) got married to a violinist, had a baby boy named Oscar, got divorced, left the orchestra, and is now helping to restore paintings for Dr. Janosz Poha (Peter MacNicol) at the Manhattan Museum of Art. When Oscar’s baby carriage gets away from Dana and starts weaving in and out of traffic by itself on the busy streets of Manhattan, she enlists Egan and Ray to look into the matter, buy asks them to keep Peter out of it. Obviously, that doesn’t last long, and Peter is soon reunited with Dana, realizing that she was probably the best thing that ever happened to him. Meanwhile, back as the museum, Janosz becomes obsessed with a large painting of sixteenth century tyrant Vigo the Carpathian (Wilhelm von Homburg from Die Hard), who begins to come to life within the painting, and enlists Janosz to help him find a child that he can possess and return to life by the stroke of midnight on New Year’s Eve. The Ghostbusters soon learn that there is a pink mood slime flowing under the city in the abandoned pneumatic train tunnels, all leading to the museum. The slime feeds off of negative energy given off my humans, and is helping Vigo gain his power. When Oscar is kidnapped by Janosz (in a sequence that pays homage to The Wizard of Oz), it is up to the Ghostbusters to change the polarity in the mood slime and use one of New York’s most recognizable icon to break through the negative slime, defeat Vigo, and save both Oscar and the city.

Sequels can be tricky, as the built-in audience wants something familiar, but not necessarily the same story told again. And that’s is where Ghostbusters II falters, using the same basic storyline as the first film, but changing the villains and adding a few other twists. The inside joke the film does have some fun with is how it was clearly stated in Murray’s contract that he was not to be slimed in the second film, and setting up possible sliming situations for his character. The comedic teamwork is still there, with Murray once again as the front man, but both Aykroyd and Ramis do get a slighlty larger share of the laughs this time out. Murray and Weaver continue the chemistry from the first film, but the odd pairing of Annie Potts reprising her role as Ghostbusters receptionist Janine Melnitz (now decked out in bright colored outfits and hair) with Rick Moranis’ Luis Tully (now the Ghostbusters’ lawyer) is a bit too broad for the movie. And poor Ernie Hudson is once again underused as the everyday middle man with whom the audience can relate to.

Is Ghostbusters II a bad movie? Not really, it’s not even a bad sequel now that it has some distance from the overpowering anticipation that audiences and the studio had upon its initial release. There is no way any film can live up to that, especially a film that was so beloved as the original. Director Ivan Reitman and his team took their best shot, and for the most part, they succeeded. Most of the effects (this time contracted out to ILM) are an improvement over the previous film, but there was also a huge leap in technology in those five years, particularly in the digital realm. The only thing ILM didn’t get quite right was the character of Slimer, who had to be recreated from scratch.

For Ghostbusters II, Ivan Reitman chose Michael Chapman to lens the picture, who has a very different style than Laszlo Kovacs, this time opting for a more fine grain film stock, resulting in a much sharper appearing image overall. And as with the original Ghostbusters, the sequel was also completed and composited on film, and that is what Sony used to create the 4k master for this UHD release. Colors are vibrant and natural, never blooming or appearing oversaturated. Fine detail is also exceptional, and the image exhibits some additional depth over all previous home video releases, yet still retains natural film grian. Contrast is perhaps the biggest winner, resulting in a much brighter and refined image.

Sony once again provides a new Dolby Atmos remix of the film, which is backwards compatible to Dolby TrueHD 7.1. Ghostbusters II was released theatrically in the Dolby Stereo Spectral Recording format, which allowed for a wider dynamic range, even with an optical soundtrack, and gave the sound designers a lot more room to play around with. Comparing the DTS-HD MA 5.1 to the Dolby TrueHD 7.1 (folded down to 5.1 for my home theater setup), it is pretty clear that the big difference is an improved lower end (something I noticed with Warner/HBO’s Atmos remixes of Game of Thrones) and a wider soundstage to place the effects. Dialogue is clear and understandable throughout, never getting lost in the mix. Randy Edelman’s score (using some of Elmer Bernstein’s cues from the original) fills the room nicely, and thew discrete surrounds are used to great effect to spook the audience.

This is my second experience with a 4k UHD disc from Sony, and their menu design takes some getting used to. While the other studios are using the exact same menu design they use on their Blu-ray (which is sometimes confusing when you’re not sure which disc is in the player), Sony has decided to go with something entirely new, where the viewer has to follow the arrows to get to the options screen they want to arrive at.

Blu-ray Copy: The 25th Anniversary release, featuring the movie in 1080p and DTS-HD MA 5.1 audio, plus the following special features – Time Is But A Window: Ghostbusters and Beyond, 7 Deleted Scenes, On Our Own Music Video by Bobby Brown, Teaser Trailer, and 2 Theatrical Trailers.

Digital HD Copy: An insert contains a code to redeem a digital copy through Ultraviolet. The code included in my review copy was exhibiting an invalid code error on both Sony’s redemption site as well as VUDU, and I have logged a ticket with Sony regarding this issue. Apparently, my review copy had a Canadian UV code enclosed, and Sony issued a new code for the USA.

Ghostbusters II is an entertaining albeit by the numbers sequel that manages to match the spirit of the original, but never surpasses it. This new 4k UHD release is the best it has ever looked or sounded on a home format. 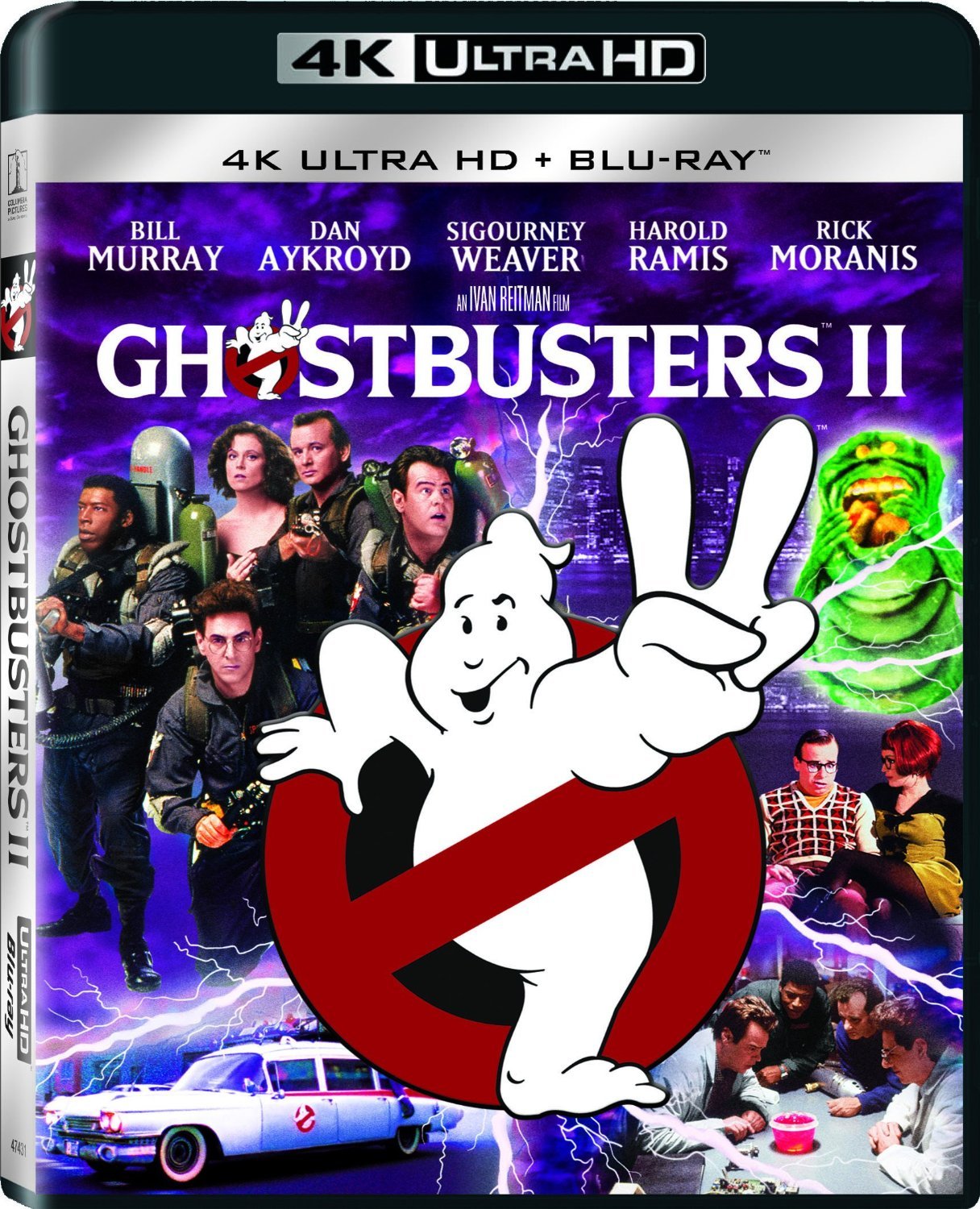