The buddy movie goes to the dogs 2.5 Stars

Show Dogs will likely appeal to the younger dog-loving crowd while trying the patience of its older audience members.

When NYPD undercover rottweiler Max (voiced by Chris “Ludacris” Bridges) foils FBI Agent Frank Mosley’s (Will Arnett) undercover attempt to catch a team of exotic animal traders who have kidnapped a baby panda, the two are teamed up as partners and work undercover as contestants in the Canini Invitational Dog Show in Las Vegas to try and find the missing panda and catch the traders. Director Raja Gosnell seems to have cornered the market for talking dog movies, having directed both live-action Scooby Doo movies, Beverly Hills Chihuahua, and now Show Dogs. I had two real problems with this movie. The first was that it took me until about 30 minutes in to figure out that the humans can’t hear what the dogs are saying, although the dogs can understand human English fairly well. I say this because in many of those early scenes, it appears that maybe Will Arnett’s Frank can understand what Max is trying to tell him, at least until the two arrive the the trainer’s trailer in Las Vegas, when it is (finally) made abundantly clear that Frank can only hear Max barking. Secondly, the movie is just not very funny. I know comedy can be rather subjective, but the screenplay by Max Botkin and Marc Hyman frequently goes for the lowest common denominator, leaning towards childish bathroom humor and a few double entendres hoping to please the adults who’s kids suckered them into watching this film, and even throwing in one or two LEGO Batman references. Will Arnett often looks lost, muttering lines that often fall flat, likely waiting to see if his paycheck doesn’t bounce. The all-star voice cast, which includes Stanley Tucci, Jordin Sparks, Gabriel Iglesias, Alan Cumming, RuPaul, and even Shaquille O’Neal can’t save this film.

As bad as the movie is, Show Dogs looks very good on Blu-ray. Although there is some minor noise here and there, particularly in the night-time New York sequence opening the film, this is a fairly clean image with good depth and detail. Colors are vivid when necessary without any noticeable banding. Contrast is decent, with the bright daytime desert exteriors never looking washed out while darker sequences retain a good level of shadow detail.

For a family-oriented movie, Show Dogs has a fairly punchy DTS-HD Master Audio 5.1 soundtrack. The track has a tight low end that drives much of the music in the film. surrounds are used effectively, particularly during the dog pageant sequences with public address announcements emanating from all five channels. Dialogue is clear and understandable throughout.

The only special features, if you can call then that, are a DVD and Digital Copy (on Movies Anywhere) of the film.

Show Dogs was a trying experience, but thankfully a rather short one. Video and Audio are very good, but no extras other than additional copies of the film. The film does beg the question – why are so many FBI agents in the movies named Mosley? 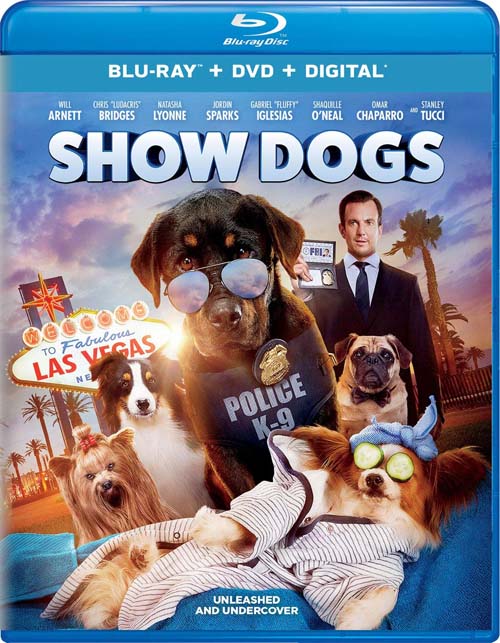