Posted on August 2, 2019 by Todd Erwin
Possibly the most fun DCEU film to date 4 Stars

An orphaned boy is given the powers to be a grown-up superhero by uttering the name Shazam! by an ancient wizard in director David F. Sandberg’s fun and often quite funny comic book origin story. The real joy of Shazam! is seeing actor Zachary Levi, who shot to fame as the Nerd-Herder turned Super Spy in NBC’s Chuck return to the role of a man-child as the titular superhero, playing a young teenager trapped in a 30-something body, discovering his newly found powers, at first misusing them for his own gain, and finally learning to use them to help others. Also a joy to watch are Asher Angel as the teenage Billy Batson and Jack Dylan Glazer as Billy’s best friend Freddy, and the chemistry between Freddy and the younger and older Billy adds to the enjoyment of the film and adds a level of true friendship. This makes up the bulk of the first two-thirds of the film, with the inevitable showdown between the hero and the villain, while still fun, rounding out the last third. The character of the villainous Dr. Sivana, played by Mark Strong, is rather underdeveloped. Yes, we know he was robbed from getting the powers Billy did when he was the same age due to his greed and lust for power, and that he has been searching for a way to regain those powers all of his life, but it’s handled rather matter-of-factly. There are some dark moments in Shazam!, and director Sandberg, having previously directed the horror films Annabelle: Creation and Lights Out, is able to switch from these darker elements and back to comedy quite well. Despite the darker moments, this is not the depressing or doom and gloom of previous DCEU films, and instead is a much more amusing and fun ride, never taking itself too seriously.

Shazam! was captured at 3.4K resolution on Arri Alexa Mini and SXT cameras, and likely completed as a 2K digital intermediate, with Dolby Vision high dynamic range used for some of its premium engagements. Warner’s upscaled 2160p HEVC-encoded transfer includes both HDR10 and Dolby Vision high dynamic range, and is a noticeable difference from the already excellent 1080p Blu-ray. Colors are much more natural and not overly saturated, with the subtle gradients of red in Shazam’s costume much more pronounced. Detail is exceptional, from the textures of the statues in the Grand Wizard’s lair to the Greek and Roman mythological symbols embedded in Shazam’s costume. Contrast gets a nice boost as well, with patterns in plowed snow much more distinguishable in the brighter daytime scenes and more defined shadow details in the dark Wizard’s lair. Shazam’s practically-lit thunderbolt also has a more intense glow than it does on the Blu-ray.

Both the UHD and Blu-ray contain the same excellent (and default!) Dolby Atmos track that is Dolby TrueHD 7.1 compatible. This is what one usually expects, sonically, for a superhero movie (perhaps Disney should take note of this on their Marvel releases). LFE is robust, giving an added oomph when Billy transforms to and from Shazam, for example. When the action kicks into gear, so do the surround and height speakers, dowsing the viewer in full audio immersion, with sounds seamlessly panning around various points within the listening area. Dialogue is clear and understandable throughout.

All of the special features can be found in the included Blu-ray version of the movie.

The Magical World of Shazam! (1080p; 26:56): This is a pretty good behind the scenes featurette that doesn’t feel like a quickly put-together collection of EPK interviews and footage. The cast and crew discuss the making of the movie, from development, the choice of director, casting, etc.

Warner and DC’s more light-hearted reset of the DCEU continues with Shazam!, a fun film suitable for most older family members (some of the darker material may be unsuitable for younger members). Warner’s audio and video presentation are excellent, and the extras are better than what are usually included these days. 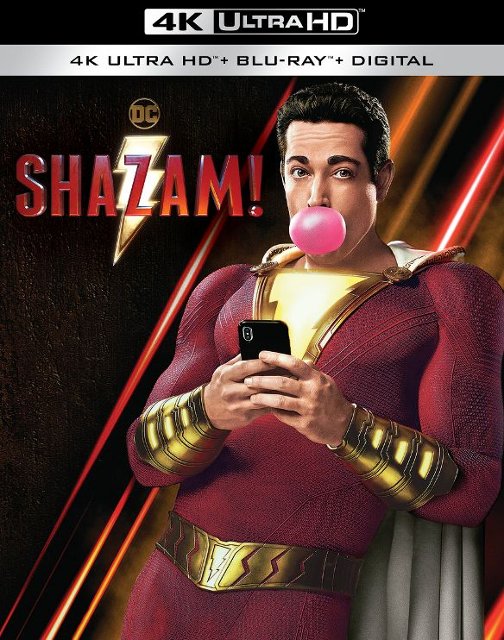