Forum List What's new Dark Style Change width
Log in Register
What's new Search
Menu
Log in
Register
Navigation
Install the app
More options
Dark Style
Close Menu
Posted on September 17, 2019 by Matt Hough
You are using an out of date browser. It may not display this or other websites correctly.
You should upgrade or use an alternative browser.
Great star power but only average comedy and drama in this enterprise. 3 Stars

There is star power aplenty in Lewis Seiler’s dramedy Pittsburgh, but the narrative is awash in most predictable formula and clichés. For a wartime public at the time of its release who was looking for a simple story of three people who love one another with some morale boosting right around the edges, Pittsburgh delivers on those undemanding requirements, but with a cast this good, the movie should have been better.

Pittsburgh Markham (John Wayne) is a coal-miner with backwoods roots, but he has unbridled ambition. He’s out to get ahead any way he can and does so by gently forcing best friend Cash Evans (Randolph Scott) into one money-making scheme after another, eventually stringing along the glamorous Josie Winters (Marlene Dietrich) who is fond of both Markham and Evans though clearly one is ruthless and one is an honest Joe. Ultimately, Markham runs the whole show, but marriage to the boss’s daughter (Louise Allbritton) doesn’t bring him happiness or contentment, and his win-at-all-costs approach to business loses him the admiration and respect of all who know him. Someone is definitely riding for a fall.

The screenplay by Kenneth Gamet and Tom Reed (additional dialogue by John Twist) reverses the personas that John Wayne and Randolph Scott played in their previous film together The Spoilers. Now, it’s Wayne who’s the unscrupulous one (although with an always-at-the-ready smile) and Scott who’s the white knight standing on the sidelines hoping his goodness will be noticed. The story is a very familiar love triangle with the woman in question loving the unprincipled one until he drives her into the arms of his rival, and the only question remains if she’ll stay true once she switches sides or will that unfulfilled passion from the earlier relationship drive her to make decisions with her heart rather than with her head. The writers take every possible opportunity to offer propagandistic rallying cries to work hard for the good of the armed forces fighting around the globe in World War II (Scott’s opening speech and a montage near the end which echoes in pictures what Scott’s words spoken at the beginning are all about aren’t subtle but are nevertheless effective), and director Lewis Seiler uses other montages to take shortcuts in storytelling as the two friends rise up the corporate ladder (while others get taken over) and later when one of them loses everything and must begin again from the ground up to regain the trust of his co-workers and the respect of his superiors. Otherwise, Seiler directs an amusing sequence where Scott fights for a $100 prize against an up-and-coming heavyweight contender that eventually explodes into a free-for-all brawl in the theater and a later coal mine cave-in that never lets us forget the daily dangers which daring workers faced.

Though top-billed, Marlene Dietrich is the decided third wheel in this triangle story. She looks smashing throughout, of course, but the real drama takes place between the two men and, in particular, with John Wayne’s clever manipulator who’s an unashamed cad both personally and professionally. Randolph Scott holds his own in the boxing ring in that early scene but elsewhere seems a little stiff and unnatural as the hard worker who is everything he seems to be. John Craven has an important role as Wayne’s conscience Doc Powers, but Louise Allbritton is given a clichéd part of the rich society woman without the colors in the writing to show how she becomes so disenchanted with her less well-groomed husband. As her father, Samuel S. Hinds is similarly afflicted with a role that needed much more fleshing out as the tycoon who has the rug pulled from underneath him. Thomas Gomez as the head of the union workers and Shemp Howard as a flustered tailor make the most of their infrequent screen opportunities.

The film’s original theatrical aspect ratio of 1.37:1 is faithfully reproduced in this 1080p transfer using the AVC codec, despite the unnecessary windowboxing of the opening credits. In this very film-like transfer, sharpness is excellent (except in glamour close-up shots of the gorgeous Miss Dietrich), and the grayscale is sublime with outstanding black levels which give an eerie reality to those coal mining scenes below ground. Apart from a black scratch or two, the image is pretty pristine, and while there is no chapter menu on the main screen, the movie has been divided into 8 chapters.

The DTS-HD Master Audio 2.0 mono sound mix is just as good as one might hope with clear and clean dialogue mixed carefully with the background score of Frank Skinner and H.J. Salter, and the sound effects (which offer nice fidelity especially during that mine cave-in and a later accident with an elevator). Age-related problems with hiss, pops, crackle, and flutter are not present.

Kino Trailers: The Spoilers, Reap the Wild Wind, Legend of the Lost, The Blue Angel, No Highway in the Sky, Canadian Pacific.

While only average in melodramatic appeal, Lewis Seiler’s Pittsburgh does offer three top stars exuding lots of on-screen chemistry. The Kino Lorber release of this Universal transfer offers a very pleasing audio and video experience, and fans of the stars of the film will likely find it very worth their while.

I think my first viewing of this movie was back on the Million Dollar movie back in the day. I always enjoyed it despite some cliches. As I stated in my blog thread, it's the best I've seen "Pittsburgh" so I'm happy with the BD. Thank you for your review.
You must log in or register to reply here. 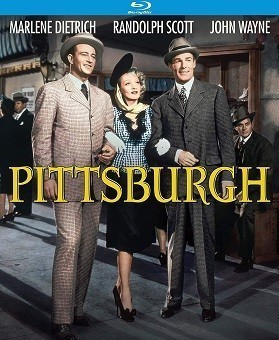