Forum List What's new Dark Style Change width
Log in Register
What's new Search
Menu
Log in
Register
Navigation
Install the app
More options
Dark Style
Close Menu
Posted on September 18, 2019 by Matt Hough
You are using an out of date browser. It may not display this or other websites correctly.
You should upgrade or use an alternative browser.
A masterpiece of British black comedy. 4.5 Stars

For those who enjoy the droll, sophisticated, underplayed comedy of the postwar British cinema, you will never find a better example of it than Kind Hearts and Coronets, one of the inarguable masterpieces of the most productive period of the Ealing Studios.

A masterpiece of black comedy with marvelous tongue-in-cheek performances by a perfect cast and subtle, brilliant direction, Robert Hamer’s Kind Hearts and Coronets is certainly a one-of-a-kind movie experience. At the top rank of the Ealing comedies produced in a stunning ten-year period after World War II, Kind Hearts and Coronets is the virtual epitome of droll British humor produced in a sparkling package of classy filmmaking at the very highest level.

When his mother (Audrey Fildes) eloped with an Italian opera singer (Dennis Price in a funny cameo), she and her son Louis Mazzini (Dennis Price) were cut off from their aristocratic family, the D’Ascoynes. After the family refuses to let her be buried in the family mausoleum, Louis avenges his mother’s death by attempting to murder every family member (all played by Alec Guinness) who stands between himself and the family fortune and a dukedom. Along the way, however, Louis finds himself torn between his longtime love, the married Sibella (Joan Greenwood), and Edith, the widow of one of his victims (Valerie Hobson). That’s when fate has a way of stepping in to right the score.

The brilliant screenplay by director Robert Hamer and John Dighton based on a novel by Roy Hornman makes a film about a serial killer into a delightful comedy of Edwardian manners and mores. Most of the film apart from the bookended prison scenes is told in narrated flashback as the protagonist explains most assuredly and in the calmest possible way the rightness and morality of his series of murders. (The irony that he’s eventually arrested for a murder he didn’t commit is not lost on him or the viewer.) The execution of Louis’ string of killings is delightfully droll as one despicable D’Ascoyne after another meets a grisly end: by drowning, by explosions, by poison, by arrow (and Louis gets a couple of freebies that he didn’t actually plan and commit himself; he relishes them just the same). Director Robert Hamer doesn’t slap the viewer in the face with the butchery; most of the deaths occur out of camera range, and we mostly only see the aftermath (a boat going over a weir, a plume of rising smoke from behind a hedge, a dropping balloon). But he gives equal time to Louis’ careful balancing act with the two women who are also diametrically opposite types: the selfish and scheming Sibella and the cultured and prim Edith. He also films an astonishing shot with six of Alec Guinness’ characters seated or standing alongside one another at one of the funeral services, sheer movie magic achievable even in an age long before computer graphics made the impossible possible.

Because Alec Guinness’ versatility is so on display throughout the film as he spectacularly undertakes eight totally different characterizations with differing make-ups, accents, and postures, it’s easy to overlook Dennis Price’s steady, unruffled performance as Louis Mazzini. But the screenplay also allows him some versatility, too, as he plays his operatic father singing an aria (rather sharp of pitch) and later in a bit of skullduggery masquerading as an older fidgety bishop when he comes to murder the parson of the D’Ascoyne family. Both actors are at the top of their game and were never better than they are here. Joan Greenwood is the personification of the purring, sneaky alley cat making bad life decisions and then expecting someone else to tidy them up for her. Valerie Hobson is her polar opposite, a quiet and refined lady of substance and honor. Apart from the four leading players, look for hilarious cameos from Miles Malleson as a dedicated hangman, John Penrose as Sibella’s sniveling, haughty husband Lionel, and Hugh Griffith as the imposing Lord High Steward.

There was much discussion about the quality of the 1.37: 1 (AVC codec) transfer given to Kino for this release. Not having seen any other high definition master and wondering if a replacement was effected after the initial review copies went out, I can only say that the one sent for review here looks spectacular: sharp, pristine throughout, and with an enviable grayscale with the cleanest white levels and the deepest blacks. There isn’t a spot, speck, scratch, or blotch to be seen: one of the best Blu-ray transfers of a classic British film I’ve yet seen. There is no chapter listing in main menu, but the movie has been divided into 8 chapters.

The DTS-HD Master Audio 2.0 mono sound mix offers excellent aural clarity for a film from this era. The dialogue (which constitutes probably the most important aspect of the movie since it is narrated by the protagonist) is crystal clear and has been combined with surety with the music directed by Ernest Irving and the various sound effects. No age-related problems with hiss, crackle, pops, or flutter exist on the soundtrack.

Audio Commentary: film historian Kat Hellinger does one of her usual talky monologues while the film plays, using the word “incredible” and its variations to distracting effect, and failing to offer much in the way of biographical identification of most of the actors.

Introduction to the Film (2:58, HD): director John Landis extols the virtues of the movie for those unfamiliar with it.

Those British Faces: Dennis Price (26:59, HD): actor Richard Todd narrates a brief biography of the actor illustrating his points with a number of clips from his films.

Audio Interview with Cinematographer Douglas Slocomb (28:17): the Oscar-nominated cinematographer discusses his early career as a photographer and his entry into the movies commenting especially on Kind Hearts and Coronets as a high water mark in his work.

Alternate American Ending (2:49, HD): a change in the film’s final shot suggesting a possible different end for the protagonist.

Kino Trailers: The Lavender Hill Mob, The Man in the White Suit, The Captain’s Paradise.

For those who enjoy the droll, sophisticated, underplayed comedy of the postwar British cinema, you will never find a better example of it than Kind Hearts and Coronets, one of the inarguable masterpieces of the most productive period of the Ealing Studios. Kino Lorber’s Blu-ray release looks wonderful and comes with some interesting bonus features. Highest recommendation!

I have the U. K. disc so cannot judge your assessment of Kino's offering. I agree fully with your review of the film.

I purchased this during the last Kino sale, but it arrived scratched so I'm still waiting for a replacement copy from Kino. I can't wait to watch it. Kino also has the rights to The Captain's Paradise, but The Ladykillers is still with Lionsgate I believe.

As always, a top-knotch review, Matt!

I have the Blu-ray of The Ladykillers and it’s a nice print of the film and it comes with a good documentary Forever Ealing. Every time I see Kind Hearts it gets better with each viewing.

atcolomb said:
I have the Blu-ray of The Ladykillers and it’s a nice print of the film and it comes with a good documentary Forever Ealing. Every time I see Kind Hearts it gets better with each viewing.
Click to expand...

I have the same BD of Ladykillers. Unfortunately, it's not widescreen, and it should. Angelo, I have the same Region A,B, Blu-ray of The Ladykillers as yourself. Identical to your photo except my Blu also is labeled Maple Pictures in addition to StudioCanal and Lionsgate...it's copyright is 2010, bilingual French/English packaging and booklet. Looks like the catalog number is 20899.

Now here's the thing with mine...it is labeled, and boldly, as full screen 1.33, on both the jewel case insert and on a card sleeve with identical artwork and design. BUT it's labeled as widescreen on the BD itself!

I don't know if it's a digital file number that's lasered on the play side that Robert wants, in which case I'm sure that mine would be different from yours. Mine appears to be BVDL-079350A1.

The code closest to the spindle on the artwork side on my copy is IFPI OWYJ. Is that the code for the manufacturing plant?

Other than the A/R, it looks very nice. But I hope a better Blu is coming.

My catalog number is 27037.1.A on the disc and it says Full Screen. Very interesting...

I believe Mr. Harris wants the pressing code from what Matt watched - if we really kept these threads on topic it would be so helpful 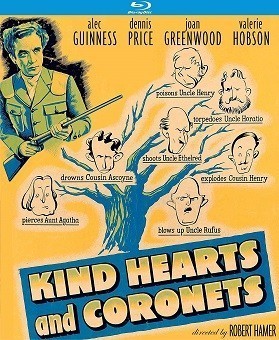