Forum List What's new Dark Style Change width
Log in Register
What's new Search
Menu
Log in
Register
Navigation
Install the app
More options
Dark Style
Close Menu
Posted on July 13, 2019 by Matt Hough
You are using an out of date browser. It may not display this or other websites correctly.
You should upgrade or use an alternative browser.
Below par Betty Grable musical outing. 2.5 Stars

One of the weakest of Betty Grable’s 1940’s Fox musical trifles, Pin Up Girl is light and frivolous enough for fans of the star, but the Blu-ray rendition of the movie is not visually up to par.

With Fox’s number one star Betty Grable also the most popular pin up girl during the years of World War II, was it any surprise that the powers that be came up with a frothy musical comedy called Pin Up Girl in her honor? Truthfully, the bosses put forth a fairly feeble effort in collating the production personnel for their biggest box-office draw (not that it mattered; the film was a smash anyway), but despite much better material in her previous musicals Coney Island and Sweet Rosie O’Grady, Betty Grable remained front and center in this decidedly second-rate Technicolor mash-up though the front office made it up to her with her subsequent musicals Diamond Horseshoe and The Dolly Sisters.

Beautiful stenographer and compulsive liar Lorry Jones (Betty Grable) and her best friend Kay (Dorothea Kent) leave Missouri for war jobs in Washington, D.C. Stopping in New York City along the way, Lorry spins a web of lies, turning herself into make believe Broadway star Laura Lorraine hoping to gain a gig in USO shows, and surprisingly it draws the attention of handsome war hero Tommy Dooley (John Harvey). Jealous club singer Molly McKay (Martha Raye) suspects Lorry’s claims are false and hopes to expose her. The situation worsens when Tommy ends up in Washington at Lorry’s new office where she must disguise herself so her beloved won’t recognize her.

Writers Robert Ellis, Helen Logan, and Earl Baldwin must take the trophy for perhaps the flimsiest premise that any of Betty Grable’s musicals were ever built on and with a romantic build-up, break-up, and make-up that defies rational explanation. The film’s rather short 83-minute running time is padded with a slew of production numbers including a roller skating extravaganza, two slap-happy tap numbers by the Condos Brothers (weren’t the Nicholas Brothers available?), two Martha Raye (instead of Carmen Miranda) upbeat scat songs (“Red Robins, Bob Whites, and Blue Birds” and “Yankee Doodle Hayride”), a couple of Charlie Spivak orchestral interludes, and a mind-numbing female drill team finale that goes on pretty interminably. Otherwise, the star takes part in that finale and all of the other Mack Gordon-James Monaco musical numbers including the extended title song (used as the opening number rather than the closing one), an “impromptu” “Don’t Carry Tales Out of School” (reprised later in the film in her stenographer’s guise), an apache dance with the film’s choreographer Hermes Pan for the “Once Too Often” number, and “The Very Merry Widow” which somehow segues into that tight formation finale drill team sequence. H. Bruce Humberstone directs solidly but without much individual style apart from the climactic moments of the Spivak Orchestra’s “Time Alone Will Tell” number where the camera sweeps up inventively to capture the quartet and the band in a beautifully staged shot.

Betty Grable was pregnant during the making of the film (seven months along by the end of filming), and while she does appear a bit chunky in some of the clinging dresses in certain numbers, kudos have to be given to costume designer Rene Hubert for disguising the star’s condition with flouncy aprons, oversized velvet coats, and yards of tulle and netting in her finale gown. Grable herself is in fine voice even if it’s obvious she’s doing much less dancing in this film than in many of her others. In the role of Tommy Dooley that would normally be played by such Fox stalwart leading men as John Payne or Don Ameche, John Harvey does just fine: youthfully naïve and eager with wide-eyed wonder at the blonde vision who sweeps him off his feet. Martha Raye’s bombastic nightclub singer Molly McKay is a fairly disagreeable character, something unusual for a performer who’s normally so eager to please. Miss Raye’s problems with remembering the lyrics to “Red Robins, Bob Whites, and Blue Birds” are obvious with careful inspection, and it’s surprising some of her gaffes weren’t covered by cutaways or retakes of the number. Joe E. Brown doesn’t get many opportunities to show his comic chops as the successful nightclub owner Eddie Hall while Eugene Pallette is likewise restricted from showing all he could do to make merry as the seemingly misogynistic Navy commander who’s got a girl in every port.

The film’s original 1.37:1 theatrical aspect ratio is faithfully rendered in this 1080p transfer using the AVC codec. Even with the foreknowledge of Fox’s compromised Eastmancolor elements from their original Technicolor photography, the variations in image quality throughout the presentation are quite maddening. The best color in the transfer comes in “The Very Merry Widow” song and dance number near the finale where flesh tones seem the most natural and color is well contained and under control. Elsewhere, the opening number is almost washed out in appearance with the ladies’ skin tones almost cream-colored and black levels terribly weak. In other portions of the movie, the color is chalky and too dark with colors blooming a bit with especially orangey skin tones and runaway red levels. And the “Once Too Often” number has black level posterization that’s very unattractive. On the plus side, the image is clear of dirt, debris, and scratches, but the color in this one is very much below par. The movie has been divided into 24 chapters.

The disc offers two variations of DTS-HD Master Audio 2.0: a mono mix and a mix that spreads the sound across the front soundstage, the latter being the default and the one used for a majority of the time in preparation for this review. Both feature above average fidelity and clean audio reproduction without distracting age-related anomalies like hiss, crackle, flutter, and pops.

Audio Commentary: unfortunately, the inadequate Richard Schickel commentary has been ported over from the DVD release. The critic speaks pretty much off the cuff with obviously no research notes in front of him since he makes generic comments about the film’s content with a number of errors or questionable personal observations: calling Joe E. Brown a second-tier talent from the 1930s (when the star was among the top ten box-office stars of the 1930s on three occasions) and that his greatest claim to fame later in his career was playing the millionaire fixated on Tony Curtis in Some Like It Hot (when, of course, it was Jack Lemmon in the film). He misidentifies Hermes Pan as the choreographer of the roller skating sequence when the main titles clearly identify the stager as Gae Foster but doesn’t mention Hermes when he shows up to partner Grable in “Once Too Often.” And he condemns Martha Raye’s postwar career as having petered out when the lady had a TV variety show that ran four years, guest starred on dozens of television shows, had some major film appearances (Jumbo) still to come, and continued entertaining troops through the Vietnam War and earning the Jean Hersholt Humanitarian Oscar for her contributions.

Deleted Musical Number (3:13, SD): “This Is It” performed in the spot where in the film the first rendition of “Don’t Carry Tales Out of School” now sits.

Six-Page Booklet: contains some color stills, original poster art on the back cover, and film historian Mike Finnegan’s generous appreciation of the movie.

One of the weakest of Betty Grable’s 1940’s Fox musical trifles, Pin Up Girl is light and frivolous enough for fans of the star, but the Blu-ray rendition of the movie is not visually up to par. There are only 3,000 copies of this Blu-ray available. Those interested in purchasing it should go to either www.twilighttimemovies.com or www.screenarchives.com to see if product is still in stock. Information about the movie can also be found via Facebook at www.facebook.com/twilighttimemovies.

Thanks for the review and in particular many thanks for dissecting the commentary track. I find most of these either irritating or boring, and It surprises me that they're always given a pass.

I like John Harvey in this film and I've often wondered why he did not become a bigger star.
You must log in or register to reply here. 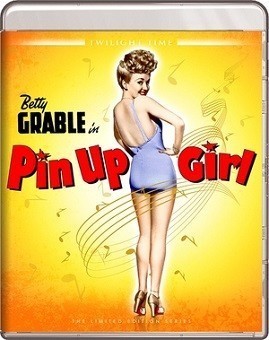