Forum List What's new Dark Style Change width
Log in Register
What's new Search
Menu
Log in
Register
Navigation
Install the app
More options
Dark Style
Close Menu
Posted on May 24, 2017 by Matt Hough
You are using an out of date browser. It may not display this or other websites correctly.
You should upgrade or use an alternative browser.
Zippy Cold War satire still plays like a house afire. 4 Stars

Billy Wilder’s frenetic Cold War comedy One, Two, Three is a farce of verbal, rather than physical, slapstick.

Billy Wilder’s frenetic Cold War comedy One, Two, Three is a farce of verbal, rather than physical, slapstick. The master writer-director uses the international political situation of 1961 to concoct a raucous array of satirical and generational wordplay that seems almost unparalleled in cinema history. That much of the film may not play as well to younger members of today’s audiences depends on how much any one individual knows of the East-West stalemates and dogma of the Cold War era, but for Baby Boomers, this is one hilariously constructed comedy of in-jokes, sarcasm, and puns in which all nationalities are in for a thorough ribbing.

C.R. MacNamara (James Cagney) is head of the Coca-Cola operations in Germany stationed in Berlin, but when the Communists erect the Brandenburg Gate splitting Berlin in two, MacNamara knows he needs to get out as the political situation is becoming hotter by the day. He dreams of a promotion to London to become Head of European Operations and gets his chance to impress his Atlanta-based boss Wendell P. Hazeltine (Howard St. John) by taking guardianship of his seventeen-year old daughter Scarlett (Pamela Tiffin) during her visit to Berlin. During her two months in the city, however, the flighty party girl manages to get herself married secretly to Russian agitator Otto Piffl (Horst Buchholz) which MacNamara knows will spell doom to any plans he has for advancement in the company. After plotting diabolically to get the marriage annulled and have Otto arrested by the Communists for disloyalty, MacNamara is chagrined to learn that Scarlett is pregnant making it necessary for MacNamara to undo his previous scheme and come up with a new plan to reunite the newlyweds and make the caustic Otto a suitable bridegroom in the eyes of his soon-to-arrive father-in-law.

Billy Wilder and writing partner I.A.L. Diamond have created a chaotically paced verbal farce with rat-a-tat dialogue which gets more frenetic as the movie runs. In fact, in the film’s last half, Cagney’s MacNamara rarely pauses to take a breath (the film’s title refers to the lists of objectives the Coke magnate barks out to his employees as scheme after scheme comes to his mind to force things to work out so he can earn his promotion), and Horst Buchholz as the always critical Otto Piffl practically matches him word for word (though the film never quite makes us believe Otto’s eventual transformation from Communist to Capitalist). Filmed in Berlin with Aram Khachaturian’s fast tempo “Sabre Dance” serving as the fitting accompaniment for the zany, zippy wordplay, Wilder rarely stops to let the characters or the viewers take a breath, and familiar symbols of the era (pictures of Nikita Khrushchev, Fidel Castro, and Josef Stalin, banging shoes on tables, talks of missiles and Sputnik and Yuri Gagarin and threats of “burying you”) are everywhere to drive home the Cold War tone of the proceedings. Though mainly a dialogue comedy, Wilder can film a chase scene with the best of them, and the sequence where MacNamara and company frantically try to get from East to West Berlin while being chased by the German police adds some frantic action in the middle of all the verbiage.

James Cagney was 61 at the time of filming, and the exhausting pace of his scenes must have been the last straw for the veteran actor as he retired shortly afterward and didn’t make another film for twenty years. He’s certainly a whirling dervish throughout with superb split second timing with his lines and his props and rarely taking a moment of repose. Horst Buchholz likewise works overtime on spitting out those lines at lightning speed, and the two men (who didn’t like one another in real life) certainly make great dueling adversaries. Pamela Tiffin’s airhead Dixie belle is an acquired taste as the accent is too syrupy Southern for words yet she, like Otto, casts off her longing for a Siberian adventure all too quickly. Still, they make a gorgeous couple. Arlene Francis does very nicely as MacNamara’s long-suffering wife, and Lilo Pulver strikes some provocative poses as MacNamara’s voluptuous and quite efficient secretary. Howard St. John is okay as the big boss man, but Hanns Lothar steals the show as MacNamara’s executive assistant Schlemmer who will do anything for his boss including donning drag in a funny bit midway through the picture.

The film’s Panavision aspect ratio of 2.35:1 is wonderfully delivered in a 1080p transfer using the AVC codec. While there are some flecks and the odd bit of debris here and there and a bit of flickering and line twitter, too, most of the image is sharp and clear. The grayscale offers excellent black levels and crisp whites. Contrast has been consistently applied for a good visual experience. The movie has been divided into 8 chapters.

The DTS-HD Master Audio 2.0 mono mix is typical of its era with limited range but strong delivery of the dialogue. Andre Previn’s musical adaptation uses not only “Sabre Dance” but also novelty tunes like “Yes, We Have No Bananas” and “Itsy Bitsy, Teeny Weeny, Yellow Polka Dot Bikini” at critical moments with sound effects also appropriate in their placement. There are no instances of age-related artifacts like hiss or crackle.

Audio Commentary: film historian Michael Schlesinger delivers an excellent, informative commentary track with background on all the leading players and insight into production problems and the film’s reception.

Billy Wilder and Volker Schlondorff Interview (3:08, SD): the men talk in both English and German (subtitled) about problems in making the picture.

Billy Wilder on Politics (6:03, SD): the director talks about how his political leanings were averse to his star’s but were tempered throughout the making of the movie.

Promo Trailers: Witness for the Prosecution, The Private Life of Sherlock Holmes, The Gallant Hours.

An excellent Cold War satire, One, Two Three requires multiple viewings to catch all of the many puns and pokes at both sides of the Cold War skirmish. Kino Lorber’s excellent Blu-ray release of this Billy Wilder classic makes return visits pleasurable indeed. Recommended!

Thanks for the review Matt. I have always had a soft spot for this movie. Sounds like I need to retire my DVD and upgrade to the Blu-ray.

Adam Gregorich said:
Thanks for the review Matt. I have always had a soft spot for this movie. Sounds like I need to retire my DVD and upgrade to the Blu-ray.
Click to expand...

I don't think you'll be sorry. And the commentary is quite informative, too.
You must log in or register to reply here. 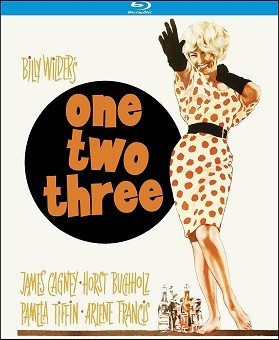