Gavin Wiesen’s All Nighter is obviously trying to be the zany, comic all night spree that made Martin Scorsese’s After Hours such a memorably bizarre but entertaining enterprise, but the film doesn’t have the story, characters, or likability factor going for it.

Gavin Wiesen’s All Nighter is obviously trying to be the zany, comic all night spree that made Martin Scorsese’s After Hours such a memorably bizarre but entertaining enterprise. But the film doesn’t have the story, characters, or likability factor going for it that Scorsese’s farce had, and even with a less than ninety-minute running time, All Nighter will try the patience of all but the most unforgiving souls.

Ginnie Gallo (Analeigh Tipton) introduces her banjo-strumming boy friend Martin (Emile Hirsch) to her big shot global enterprise-handling father Frank (J.K. Simmons) at a dinner where things could hardly have gone worse impression-wise. Six months later, Mr. Gallo turns up on Martin’s doorstep wanting to talk to his daughter, but Martin and Ginnie had broken up three months prior, and he has no idea where she can be found. Since Martin doesn’t know his way around the Los Angeles neighborhoods she might frequent, Martin agrees to go along as a guide as they follow meager bread crumbs from one place to another trying to locate Ginnie who’s not answering her cellphone and seems to have been jumping from place to place and job to job since the break-up. As the search continues past midnight, Frank and Martin begin to bond over their mutual failures though Frank gets more and more desperate to gain any kind of concrete information about his daughter’s whereabouts and well-being.

Screenwriter Seth Owen couldn’t have written a more uninteresting and off-puttingly flakey bunch of secondary characters if he had wanted to, most of the individuals met by Frank and Martin being unrecognizable human cartoons including drugged out roommate Jimothy (Jon Daly), henpecked hubby Gary chafing under the thumb of controlling wife Roberta (Kristen Schaal), Ginnie’s tripped-out best friend Megan (Xosha Roquemore) and her bullying boy friend Bri (Trenton Rostedt), and on and on. After bar fights, jealous boy friend confrontations, and breaking-and-entering charges cap the night, there is little place for the movie to go, and it quietly ends with the central characters settling into their new status quo. Director Gavin Wiesen hasn’t done much in the way of staging to make the evening’s events possess any kind of particular tone, either of fear or freakiness or lunacy (when two projectile vomiting encounters and the discovery of a black dildo gun is the height of your comic invention, you know things are pretty dire). It’s all fairly bland and paint-by-the-numbers trying to find some comic set piece that might actually bring a laugh or two to the beleaguered picture. Nothing really works.

Oscar winner J. K. Simmons and Emile Hirsch play pretty much characters they could do in their sleep: Simmons the stone-faced sophisticate and Hirsch the wide-eyed innocent (described by one of his non-fans as “part Kermit the Frog”). Though their male bonding over the course of the film makes each one a bit more palatable by the end, these are not characters that will be etched in the memory. As the clichéd beleaguered husband, Taran Killam pushes way too hard to find the funny, but it never really happens. Jon Daly as the stoned-out Jimothy likewise plays his one-note role as the spaced out cartoon character that it is. Kristen Schaal comes closest to earning some laughs as the exasperated wife coping with her ne’er-do-well hubby with a plastered-on smile and the venom of a cobra. Analeigh Tipton as the object of everyone’s attention Ginnie is adequate but no more.

The DVD is framed at the theatrical aspect ratio of 2.35:1 and is anamorphically enhanced for widescreen televisions. Sharpness is inconsistent throughout the running time with some particularly low lit scenes evincing some murky picture qualities lacking much detail and some light level contouring on some of the clothes. Color is believable throughout with just the right level of saturation. Black levels are acceptable but no more. The movie has been divided into 28 chapters.

The Dolby Digital 5.1 sound mix puts the well-recorded dialogue into the center channel. Alec Puro’s background score and a couple of Bob Seger tunes (plus some banjo playing and singing by Emile Hirsch in the finale and over the closing credits) get a nice spread through the entire soundstage. The atmospheric effects of their nighttime spree whether it be in noisy clubs, chased through alleyways by the cops, or in a police department cell are all professionally delivered in the mix.

Promo Trailers: Why Him? Keeping Up with the Joneses, The Bounce Back

Comedy without the funny becomes something of a painful experience in Gavin Wiesen’s All Nighter, a slapdash comedy that’s not even being given a Blu-ray release. Fans of the stars may wish to try a rental, but this is generic farce at its most basic and unimpressive. 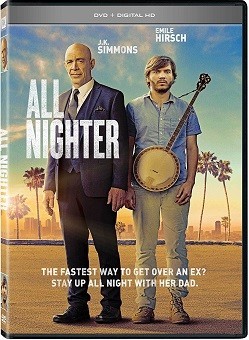