NCIS continued along for its fourteenth season without missing a beat despite the loss of a favorite longtime character and the passing of its much-loved showrunner.

The fourteenth season of CBS’ most popular drama NCIS was quite an emotional one both on screen and off. With one of its most popular characters leaving at the end of the previous season (its actor to eventually star in his own hit CBS show) and its long-time showrunner dying unexpectedly a quarter of the way through production of the new season, the emotional toll on the show seems to have been reflected in the writing of many episodes of the season with the scripts producing more tearjerking moments in this year’s shows than in practically all of the previous seasons combined.

In order to replace the vivacity and unpredictability that Michael Weatherly brought to the show as Special Agent Tony DiNozzo, the producers hired three new cast mates to beef up the agent pool of the show. First up was Nick Torres (Wilmer Valderrama), brought in from an eight-year undercover assignment and now assigned to a team for the first time in his career. His long adjustment to working with others and following someone else’s directives takes most of the season to smooth out. Next came Alex Quinn (Jennifer Esposito), a longtime special agent instructor at FLETC who team leader Jethro Gibbs (Mark Harmon) finally offers a job to instead of taking one of her untried, newly commissioned agents. And finally, MI6 operative Clayton Reeves (Duane Henry), who had assisted on a few cases at the end of the previous season when it became clear Tony DiNozzo was going to leave the agency, is brought in on loan from MI6 to work the international desk on cases dealing with foreign affairs.

This was a season of romantic relationships on the show (though the show continues to irritate with its characters much too interested in each other’s personal lives like junior high school gossips). In addition to the at long last engagement and wedding of now senior field agent Timothy McGee (Sean Murray) to Delilah Fielding (Margo Harshman), Cupid comes calling for both agent Ellie Bishop (Emily Wickersham), who becomes involved with NCIS records analyst Qasim Naasir (Rafi Silver), and NCIS director Leon Vance (Rocky Carroll) with an acerbic congresswoman (Mary Stuart Masterson) who is determined to pull Leon into the political arena. Neither romance lasts the season, and the story of the tragic end to Bishop’s happiness constitutes the one multi-part story arc of the season as she and the team go after international terrorist Kai Chen (Bruce Locke).

The emotional free-for-all continues with several other characters in episodes especially tailored for the talents of the cast. Assistant medical examiner Jimmy Palmer (Brian Dietzen) gets the spotlight in the season’s best episode “Keep Going” as the timid Jimmy finds himself preventing a suicide attempt on the ledge of a building and while building rapport with the distraught young man he’s trying to save reveals much about his life and history with the team leaving not a dry eye in the house. Alex Quinn must deal with the fallout from a previous case in Philadelphia and later with the growing Alzheimer’s in her mother (Mercedes Ruehl) in a touching episode which will allow for the Alex Quinn character to be written out of the show (early in the summer, it was revealed that Jennifer Esposito would not return for another season). Dr. “Ducky” Mallard revisits some poignant past memories in his prickly relationship with his late mother in “The Tie That Binds” which allows another most welcome return for actor Adam Campbell playing the young “Ducky.” And Nick must confront haunting memories of a lost love to cancer in “M.I.A.” when he’s assigned to guard a dying Navy officer who reminds him of his high school girl friend.

But for most of the season, it’s the crime mysteries that the team must tackle that hold one’s attention. Gibbs goes undercover to find some long missing nuclear fuel rods, the team is confronted with heinous ransomware that infects the NCIS computer system, and an unusual injected poison dot proves problematic to trace. There is another crossover this season with NCIS: New Orleans as the teams go looking for a missing terrorist playbook, and a search for a missing Navy SEAL in Paraguay leads to the expected season cliffhanger with Gibbs and McGee left in dire straits. The program also brings back Robert Wagner for a couple of return appearances as Tony’s dad Anthony DiNozzo, Sr. that keep us abreast of Tony’s life in Paris, and the Sherlocks, a group of amateur sleuths who often prove more hindrance than help, also make a return visit. All of the program’s regular cast members are now firmly settled in their roles and perform with expected ease. Wilmer Valderrama fits right into squad with his character overly cocksure but occasionally charming and a decent replacement for Tony. Duane Henry only makes sporadic appearances as Clayton Reeves, but he has a place now as an occasional member of the team. Only Jennifer Esposito seems misplaced, her glamazon hair styles and sleepy demeanor a definite non-starter from the get-go and her laid back performing style never really finding firm footing in the fast-paced episodes.

Here are the twenty-four episodes contained on six discs in this season fourteen set. The names in parentheses refer to the participants in that episode’s audio commentary:

16 – A Many Splendored Thing

The program is presented at 1080i on the network broadcasts, and these downconverted 1.78:1 transfers are anamorphically enhanced for widescreen televisions. The show switched to digital production a few seasons ago, but the image has maintained its slightly soft-focused (especially in the commons room), slightly diffused color, and slightly milky contrast look even when going from film to digital. The picture quality is perfectly pleasing and similar to the network broadcasts, but it’s never going to have the crystal clarity or eye-popping color values of other primetime series, and being standard definition, there are moiré patterns and aliasing to be seen occasionally. Flesh tones are fairly natural, and black levels are all decently rendered. Each episode has been divided into 7 chapters.

Audio Commentaries: three are provided for this year’s episodes. None are particularly revelatory though Rocky Carroll in his commentary does occasionally try to explain his directorial choices for certain shots.

Table Read (27:43): for the episode “Nonstop,” we see the first day table read with cast and producers while a picture-in-picture window shows us the scenes as they ended up being shot.

“Pandora’s Box, Part II”: the second half of the crossover episode that aired on NCIS: New Orleans is included on disc four. It also contains commentary by writers Christopher Waild and Christopher Silber.

Joining the Family: The New Agents (10:30): producers Chas. Floyd Johnson and George Schenek along with cast members Mark Harmon and Pauley Perrette comment on the new additions to the cast with soundbites also coming from Duane Henry, Wilmer Valderama, and Jennifer Esposito.

Tribute to Gary Glasberg (3:48): the longtime showrunner who died during the production of this season is remembered by Mark Harmon, David McCallum, and Chas Floyd Johnson.

Brian Dietzen’s NCIS (8:55): the actor takes us on a tour of all of the standing sets for the show and the outside backlot where street scenes are filmed.

NCIS continued along for its fourteenth season without missing a beat despite the loss of a favorite longtime character and the passing of its much-loved showrunner. The emotional textures of many of this season’s episodes make this one of the best of the later seasons of the show and despite the standard definition release comes recommended. 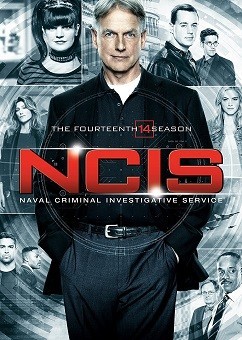