Made during his “early, dirty” period when bad taste was always the goal and subversion the overriding watchword, John Waters’ Multiple Maniacs is an underground cineaste’s filet mignon.

Made during his “early, dirty” period when bad taste was always the goal and subversion the overriding watchword, John Waters’ Multiple Maniacs is an underground cineaste’s filet mignon. Raw, daring, and often beyond the pale, Multiple Maniacs shows many of the qualities that auteur John Waters would instill in all of his later movies, whether they were to be exploitation quickies or studio A-pictures.

Con woman Lady Divine (Divine) has been using her Cavalcade of Perversion side show to lure in innocents and strip them of their valuables, but when her fiery temper causes her to take the life of one obstreperous victim, her lover Mr. David (David Lochary) decides he’s had enough of her instability and unrealistic expectations and decides to bolt the act with the earnest Bonnie (Mary Vivian Pearce) who worships him, an attraction that he has long since lost from Lady Divine. Lady Divine is fed up with David, too, and when she meets the lovely Mink (Mink Stole) in church where Divine goes for guidance after being savagely raped in an alley, their instant attraction surprises the Lady who had heretofore only been interested in heterosexual arrangements. Now, both Divine and David have reasons for ending their relationship, but neither is going to take the rejection of the other with aplomb.

This feature-length film was writer-director-producer-cinematographer-editor John Waters’ first one with synchronized sound, but while made for only a few thousand dollars, his inexperience with editing means there are long takes in conversations between characters rather than the use of usual multiple coverage takes in filming dialogue. Though the filming itself is crude and Waters’ same group of friends doubles and triples in various crowd scenes without even the most rudimentary attempts to make them look different, there are satirical and exploitative ideas aplenty in the movie, and the nasty shots taken at societal norms (sexual identities are constantly in question) and organized religion won’t be missed by any thinking viewer. While the film revels in its blasphemy (a rosary used as a sex toy while being raped in a pew with other parishioners in attendance), it’s also quite hysterical in places as when Waters portrays the miracle of the loaves and fishes when Jesus (George Figgs) provides for the multitudes by turning two dinky fish into multiple cans of A&P tuna and a few buns become loaves of bread from the corner market. Lady Divine submits to three rapes in the movie: one which is distressing for her, one which reveals her heretofore unknown interest in same-sex experiences, and the third (by a giant lobster as the film slides into its climactic scenes of complete surrealism) which causes her to lose her last tiny grip on reality (she’d already turned into a cannibal) and concentrates on its satirical stabs at our gun-happy society who, like its latest victim, finds killing a kind of cathartic release.

While many of the company show no talent for delivering lines with any realistic conviction, Divine certainly displays throughout a magnetism and camera-ready ease that defies all of the amateurish camerawork and staging and establishes that he was a fearless show biz natural. Mink Stole as Mink also delivers her dialogue with assurance though in the early crowd scenes, she can’t help breaking character and smiling in scenes where she as a suburbanite is supposed to be disgusted and in one memorable moment adjusts the adhesive tape placed over her mouth that was about to slide off. Mary Vivian Pearce is flat-voiced and amateurish all the way as Bonnie, and yet she’s quite endearing as she expresses to Mr. David her excitement to “perform acts” with him. David Lochary veers back-and-forth between ease and stiffness as the object of both ladies’ lust. And for those familiar with Waters’ forthcoming anarchic cinematic spectacles like Pink Flamingos and Female Trouble, you will recognize other members of his stock company like Cookie Mueller (who plays Divine’s indolent daughter), Susan Lowe, and Edith Massey (who not only plays herself in the bar scenes but also the Virgin Mary in the Christ epiphany sequences).

The film is framed here at 1.66:1 and is presented in 1080p resolution using the AVC codec. Filmed originally in 16mm, the sharpness here is quite surprising when Waters has the camera focused and on point (quite often, it’s clumsily unfocused and wandering), and the grayscale is very nice with Divine’s black hair and lip gloss (allegedly mascara and black eyebrow pencil rather than lipstick) registering especially deep and white levels clean and crisp except when they’re obviously meant to bloom. Contrast has been consistently applied to the transfer. While most of the age-related dirt and debris has been removed, one prominent scratch along the left side remains and a glob of debris likely on the camera aperture during filming in the upper left of the frame has been allowed to remain for a few scenes. The movie has been divided into 9 chapters.

The PCM 1.0 (1.1 Mbps) sound mix offers the dialogue and narration clearly and relatively cleanly with but the slightest whisper of hiss in the quieter scenes. George S. Clinton’s music with some song standards and the atmospheric sounds have been blended with the verbiage most professionally. It’s a crude soundtrack, but it gets the job done and suits the rough nature of the images it accompanies.

Audio Commentary: director John Waters animatedly reminisces about the making of the film and all of the people who worked on it in an engrossing commentary that fans of the movie will really enjoy.

Cast Interviews (32:26, HD): Pat Moran, Vincent Peranio, Mink Stole, Susan Lowe, and George Figgs each share memories of working with John on the project and share stories about other cast members no longer with us.

Enclosed Pamphlet: contains the cast and crew lists, some black and white actor portraits, information on the video and audio transfers, and a critical essay on the movie and its impact by reviewer Linda Yablonsky.

Anarchic filmmaking at its most tasteless and beguiling, Multiple Maniacs gives us a healthy dose of early John Waters as his filmmaking interests and stock company performers were coalescing. This Criterion Collection Blu-ray release certainly offers a near-pristine glimpse at one of the filmmaker’s earliest feature film efforts and is sure to delight fans of one of the renegade auteur’s signature efforts.

Too bad they couldn't clear the rights to use the original music. That makes me take a pass on this one.

I saw it tonight. The film originally had music cues all through it if I remember correctly. Now it just has a couple of cues and a fake Link Wray riff. The film plays totally differently than I remember it without the music. 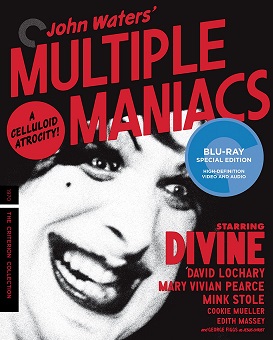